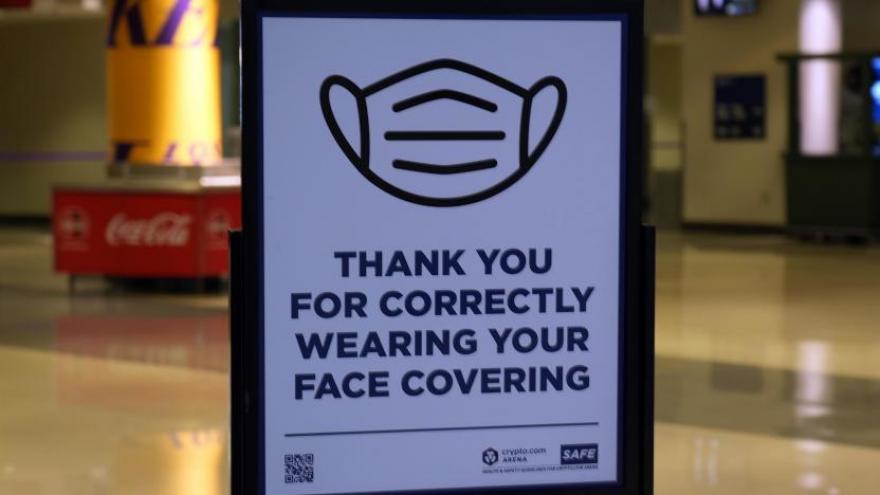 A face mask advisory sign is posted at Crypto.com Arena during an NBA game between the Los Angeles Lakers and the Sacramento Kings.

(CNN) -- Citing a 65% drop in Covid-19 cases since the peak of the Omicron surge, California will end its statewide indoor mask mandate for vaccinated individuals next week, nearly two years after it was first implemented, Gov. Gavin Newsom announced on Monday.

"On February 15, California's statewide indoor mask requirement will expire. Unvaccinated people must still wear masks in indoor public settings," he said. Less than 20% of the state's population remain unvaccinated, according to data from the state health department.

The Biden administration has not yet offered a plan or roadmap for how states should handle the transition out of the Covid-19 emergency into a greater sense of normalcy. But many states are beginning to pull back on Covid-19 mitigation measures as the latest surge begins to recede. Governors of Connecticut, New Jersey and Delaware as well as Oregon's health department have recently set timelines for the end of their states' school mask mandates.

California officials indicated school masking policies will be updated to reflect the new statewide policy, according to a source with direct knowledge of the situation.

"The state is continuing to work with education, public health and community leaders to update masking requirements at schools to adapt to changing conditions and ensure the safety of kids, teachers, and staff," the California Department of Public Health said in a press release Monday. "Additional adjustments to the state's policies will be shared in the coming week."

California was among the first states to require face coverings in public places, which has been in effect since June 2020.

Counties with stricter rules such as Los Angeles and much of the Bay Area may still keep the mandates in place.

The easing of the mandate goes into effect two days after the state hosts the Super Bowl at SoFi Stadium in Inglewood.

Newsom and other local leaders had been criticized for removing their masks at the NFC championship game last week between the Los Angeles Rams and San Francisco 49ers.