California's largest utility provider's role in wildfires is under scrutiny 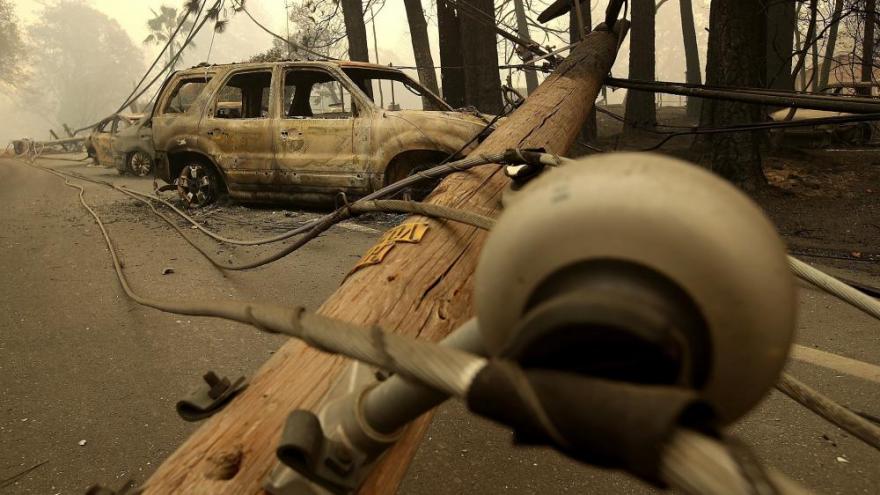 A California utility company said its crews found a damaged transmission tower and holes in a power pole at separate locations near the site where the Camp Fire started.

By Madeleine Ayer and Scott Glover

(CNN) -- As investigators seek to determine the cause of the deadliest wildfire in California history, the culprit that fire officials have linked to more than a dozen fires that ravaged large swaths of Northern California last year is again in the hot seat.

The suspect is not some deranged serial arsonist -- it's California's largest public utility: Pacific Gas & Electric, or PG&E.

The company, of course, is not suspected of intentionally causing any fires. Rather, it's under scrutiny for how it maintains its sprawling infrastructure that delivers electricity to some 16 million Californians -- much of it via above-ground power lines running through heavily forested public land.

Last year alone, PG&E equipment caused 17 fires, often after falling branches or trees came into contact with power lines, according to state fire officials. In 11 of those cases, state fire investigators found the company violated codes regarding brush clearance or related violations and referred the matters to local prosecutors for their review. No charges have been filed.

In the aftermath of this year's Camp Fire in Butte County, which has claimed at least 86 lives, PG&E reported "an outage" on a transmission line in the area where the blaze began, about 15 minutes before it started. Within the massive burn area, PG&E reported finding power equipment and a felled power pole riddled with bullet holes, according to a letter it sent to regulators. The company also reported finding a downed line with tree branches on it. The cause of the Camp Fire remains under investigation, fire officials said.

In the wake of the fires, PG&E is facing billions of dollars in potential liability that could exceed its insurance coverage. Its stock has plunged 50%. And it's also facing a wide-ranging investigation by the California Public Utilities Commission "to determine the best path forward" for the utility.

PG&E declined requests to be interviewed for this story. In response to questions from CNN, the utility said "the threat of climate-driven wildfires is the biggest issue facing our company today, and one of the most critical issues facing California."

The company provided a list of "new and enhanced safety measures," including upgrading its vegetation management efforts, conducting accelerated safety inspections and "proactively turning off electric power, only as a last resort, when extreme fire danger conditions are forecasted."

It also described a "longer-term" plan to install "stronger and more resilient poles and covered powers lines across 7,000 miles of highest fire-risk areas over the course of the next 10 years." PG&E said it has spent more than $15 billion to improve its equipment and make it more fire safe over the past five years.

As for the 2017 fires, "we look forward to the opportunity to carefully review the Cal Fire reports which have not been made public yet to understand the agency's perspectives. In the meantime, we will remain focused on helping the communities who were impacted by the 2017 Northern California Wildfires to recover and rebuild."

Electrical lines are not the top cause of wildfires in California, and PG&E is by no means the only public utility that has been found at fault for starting them. But they have been the source of far more than other companies in recent years, according to an analysis of CPUC data, first reported by the Sacramento Bee. The other utilities provide services to smaller, more urban areas with fewer trees abutting power lines.

PG&E and other utilities spent millions on a lobbying effort last year that resulted in legislation allowing them to spread out wildfire liability costs over many years and to pass along some of the expenses to customers.

Critics of PG&E say the problem it faces regarding fire prevention is not so complex.

"Most of these problems result from, really, a failure at gardening," said Jamie Court, president of the advocacy group Consumer Watchdog.

"What we have to do is put a fire chief in charge and make PG&E garden its power lines and make PG&E modernize its equipment," he said.

Court referred to the company as "a convicted felon" that "doesn't clean up its act when it doesn't have a police chief or fire chief standing over its shoulder."

Court was referring to the company's criminal conviction on six felonies for violating safety regulations and obstructing an investigation into a 2010 natural gas pipeline explosion in San Bruno, California, that killed eight people.

The judge overseeing PG&E's probation in that case last month ordered the utility to provide written answers about its potential role in recent wildfires.

John Fiske, an attorney representing more than 1,000 victims of multiple fires up and down California, called it "almost ridiculous" that a multibillion-dollar corporation like PG&E has been unable to address the problem of trees falling into power lines.

Fiske, who lives in the San Diego area, points to improvements made by San Diego Gas and Electric after catastrophic wildfires in Southern California in 2004 and 2007.

The company spent more than a billion dollars on improving its infrastructure, including replacing wood poles with steel ones, according to a spokeswoman for the utility. It also adopted a more aggressive policy regarding when to de-energize its lines as a precaution in the event of high winds, she said.

"PG&E does have a much larger service area and a much larger number of customers," Fiske said. "However, the technology is definitely there for them to step up to the plate."

Norma Quintana, who lost her home in the Napa Valley to the 2017 Atlas Fire, said she decided to join in litigation against the company to send a message. That fire ignited in two locations, according to Cal Fire. At one spot, the agency said, "a large limb broke from a tree and came into contact with a PG&E power line."

It's not about the money, said Quintana, a documentary-style photographer who is married to a physician.

"I just want to hold them accountable," she said. "This needs to be up-front and clear as to who is responsible for such a disaster."

James Engel, a deputy chief with Cal Fire, the agency charged with investigating wildfires in the state, said it remains to be seen whether PG&E could face criminal charges for its role in the 2017 fires.

He said his officers had completed investigations, made recommendations, and forwarded their work to local prosecutors, some of whom also have sought a review from the state attorney general.

"Those fires we're talking about from last October are still in the process," Engel said in a recent interview with CNN. "We've done our part and we're waiting for the rest of it to fall into place."