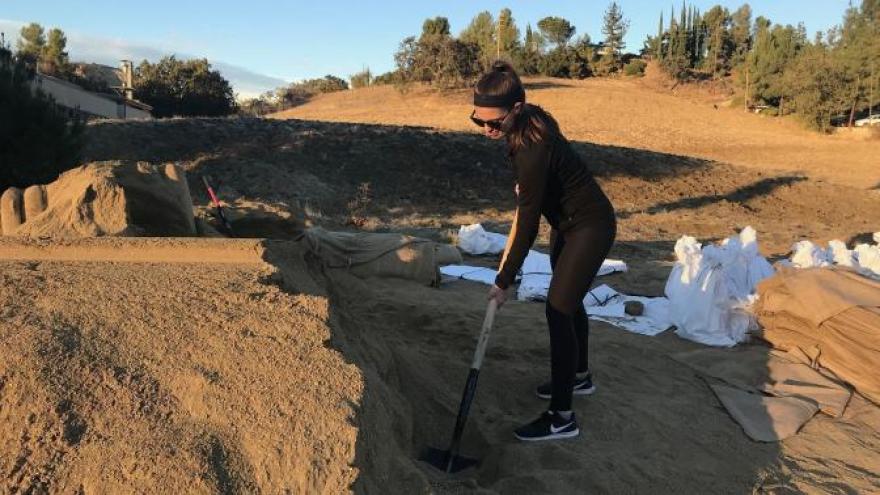 In Agoura Hills, which was hit by the Woolsey Fire, teams are building mudslide barriers.

(CNN) -- After two years of colossal wildfires, California is now a checkerboard of dangerous burn zones threatening to turn into mudflow disasters.

A record 1.8 million acres have turned black this year in the Golden State, from Redding to Riverside County, Cal Fire reports.

Now, meteorologists and first responders view each coming rainstorm for its potential to trigger mudslides below slopes stripped bare by blazes.

"We're getting into situations we never planned for or foresaw," Cal Fire spokesman Scott McLean said. "But we continue to fight the fight."

Homeowners and volunteers are also joining the battle, shovels in hand, stuffing bags with dirt, or sometimes sand, to build barriers against mudslides.

Lauren Young filled up sacks on a dirt hill in Agoura Hills, one of the communities charred by the Woolsey Fire, which destroyed 1,500 structures and charred almost 97,000 acres.

"We are surrounded by mountains and it's beautiful, but this is something we have to get ready for," Young said as she took a break.

"We saw what happened in the Santa Barbara Montecito area, so we want to stop that from happening here."

Last January, after the Thomas Fire burned 281,000 acres in Santa Barbara and Ventura counties, a huge storm stalled in the mountains above Montecito.

The bare hillsides lacked the vegetation to hold water and an ensuing mudflow killed 21 people. Two children are still missing.

Rivers of mud and rock destroyed or damaged more than 435 homes.

"We're still digging out from that and we will be for a while," said Dale Olivas, leading a platoon of FEMA-paid workers clearing dried mud and piles of brush in Montecito.

Olivas stood next to a disaster exclusion zone sign in a neighborhood where Montecito residents were found in muddy tombs.

The mudflow claimed Olivas' tree care business, because many owners of ruined homes could no longer pay for his services.

"Be organized," Olivas warned residents of other California communities vulnerable to the mudslides. "Be prepared. When they asked you to evacuate, evacuate."

Across California, counties are setting up systems for residents to sign up for text alerts on phones, laptops and other devices.

In Ventura County, first responders are keeping watch on the Thomas Fire burn zone to the west and the Woolsey and Hill fire zones to the east

"There's not a lot of vegetation that's going to (help) hold the rain," said Ziegler. "The steeper the terrain, the faster the rainwater is going to pick up speed."

But predicting just where the next major California mudslide will bury a community is a challenge.

"You have so many microclimates that it makes it difficult to determine exactly where these big storms are going to develop," said Keily Delerme, meteorologist with the National Weather Service Oxnard station.

The big storms have been rare as California suffers through the ravages of several years of drought.

"It's good for us to get rain, but it's dangerous in those burn areas," Delerme said.

"You have to be cautious about what you wish for."