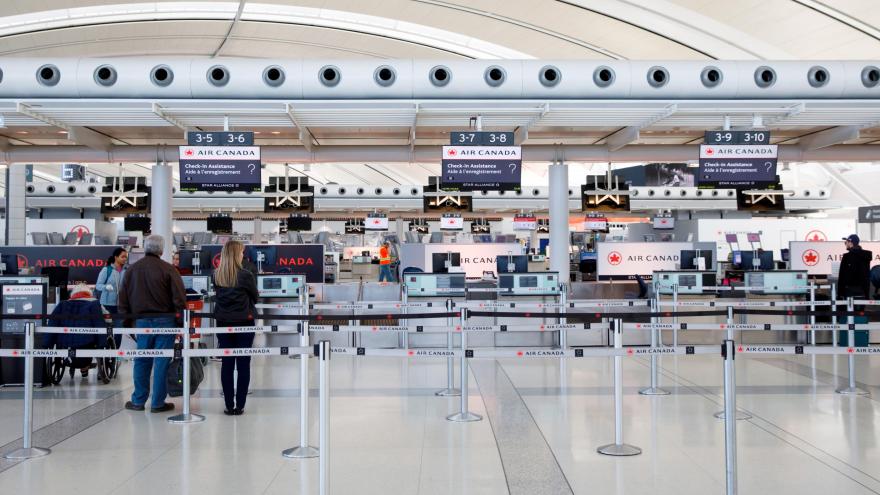 Canada will require most commercial passengers traveling by air, rail or large ship to be fully vaccinated by fall, and pictured Toronto Pearson International Airport on April 1, 2020 in Canada. - Cole Burston/Getty Images

(CNN) -- Canada will require most commercial passengers traveling by air, rail or large ship to be fully vaccinated by fall.

The Canadian government also will mandate that all federal employees be fully vaccinated by the end of October.

Canadian ministers speaking at the press conference indicated that they wanted to "set an example" for other employers and Canadians as they continue to try and safely reopen more sectors of the economy.

In a statement released after the announcement, Air Canada said it supported the new mandate and said it was in line with science-based procedures for safe travel.

"Although Air Canada awaits further details about today's announcement on mandatory vaccinations, it is a welcome step forward in the evolving measures to protect the health and safety of airline employees, customers and all Canadians," according to the statement.

Canada has recently started to allow international leisure travelers across its borders, beginning with vaccinated Americans this week. There are tentative plans to extend discretionary travel to other vaccinated international visitors to Canada in early September.

In the United States, there is currently no consideration at the Department of Homeland Security to mandate vaccines for airline passengers on domestic flights, Homeland Security Secretary Alejandro Mayorkas told CNN's Pamela Brown Friday.

"There is not at this time," he said when pressed on the issue.

At least two US airline executives have said they don't expect vaccinations to be required for domestic travel.

United Airlines CEO Scott Kirby said Wednesday that "it's a government question, but I suspect that it won't happen domestically," and Delta Air Lines' CEO Ed Bastian said virtually the same thing in May.

Kirby said it is possible that vaccinations will be required for some international travel.

'An evolution' of vaccination requirements

Prime Minister Justin Trudeau has said in recent months that he did not believe vaccine mandates would be necessary.

His ministers backtracked on that Friday and said their position was "an evolution of the government's posture" given new scientific data, adding that this new policy is an incentive for Canadians to get vaccinated.

Those with documented medical reasons for refusing a vaccine with be exempted, the ministers said, but they were not categorical about what would happen to those employees who refused to get vaccinated despite the mandate.

While this is a wide-ranging policy that will be implemented nationally, many Canadian provinces are currently not requiring health care or education workers to be fully vaccinated as a condition of employment.

Canadian public health officials confirmed Thursday that the country is in the grips of a fourth wave of Covid-19, and that the virus is mounting a "strong resurgence."

Canada has seen a doubling of active Covid cases in just two weeks, and hospitalizations have inched up more than 10% in the last week alone.