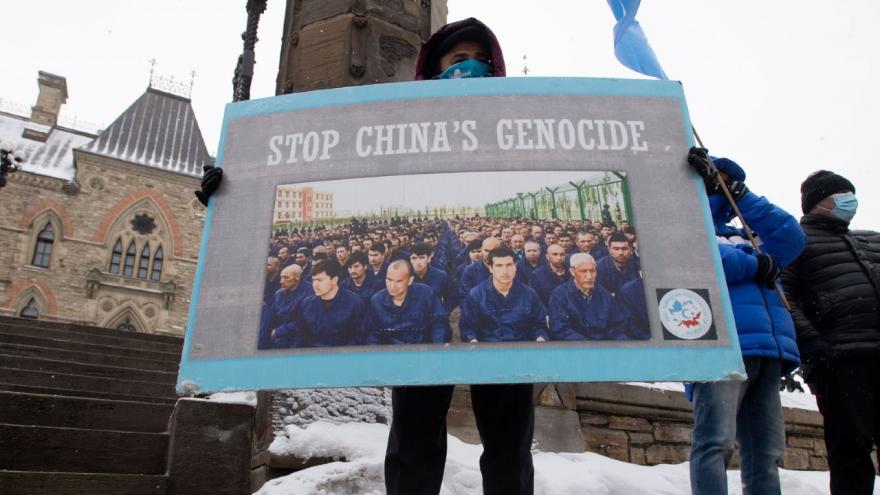 (CNN) -- Canadian lawmakers have overwhelmingly approved a non-binding motion accusing China of committing genocide against its Muslim minorities in the western region of Xinjiang, further straining ties between the two countries.

Though Liberal Prime Minister Justin Trudeau and his Cabinet abstained from Monday's vote, a majority of lawmakers -- including many Liberals who participated -- voted in support of the motion, which was brought by the opposition Conservative Party.

The motion, which recognizes "that a genocide is currently being carried out by the People's Republic of China against Uyghurs and other Turkic Muslims," also calls on the International Olympic Committee to move the 2022 Winter Olympic Games from Beijing.

The United States government has estimated as many as 2 million people from Muslim minorities may have been detained in recent years by the Chinese government in mass detention centers in Xinjiang. Former detainees have alleged they were subjected to indoctrination, physical abuse, and even forced sterilization.

The motion will likely now put pressure on Trudeau's government to toughen its stance on China. Diplomatic tensions between the two countries have risen in recent years, following Canada's arrest of Huawei's Chief Financial Officer Meng Wanzhou on behalf of the US, as well as China's subsequent detention of Canadian's Michael Kovrig and Michael Spavor for alleged espionage.

Canada's Foreign Affairs Minister, Marc Garneau, was the only cabinet minister to attend the vote in parliament, officially abstaining "on behalf of the Government of Canada."

Opposition leader, Erin O'Toole, who led the effort on the parliamentary vote, called on the Trudeau government to support the determination, which while symbolic will not become government policy. "It is shameful that Justin Trudeau and the Liberal government continue to refuse to call the horrific conduct by the Chinese Communist Party what it is: a genocide," said O'Toole Monday.

The parliamentary vote also makes Canada the first country to semi-officially support calls for Beijing to be stripped of the 2022 Winter Olympic Games over allegations of human rights abuses. More than 100 human rights organizations have joined together to advocate for a political boycott of the forthcoming Games, which are due to be held in February next year.

At a news conference on Tuesday, Chinese Foreign Ministry spokesman Wang Wenbin said Canada should stop politicizing the 2022 Beijing Games, saying it undermined "the interests of the international Olympic movement and athletes from all countries."

Calls for an international investigation

The passing of the motion comes just over a month after the US government made the same determination, with then-US Secretary of State Mike Pompeo announcing that the world was witnessing the "systematic attempt to destroy Uyghurs by the Chinese party-state."

The Chinese government has repeatedly denied allegations of human rights abuses against Muslim minorities in Xinjiang. Foreign Ministry spokesman Wang said Tuesday that China "strongly condemns and resolutely opposes the motion" by the Canadian Parliament, adding that they had made representations to Ottawa.

"The facts prove that there has never been any genocide in Xinjiang," he said.

In a statement released following Monday's vote, Canadian Foreign Minister Garneau said that the Trudeau government believes that allegations against China need to be investigated by international experts.

Garneau's statement came on the same day as British Foreign Secretary Dominic Raab called on China to give the United Nations "urgent and unfettered" access to Xinjiang so that accusations of human rights abuses could be independently investigated.

"The situation in Xinjiang is beyond the pale. The reported abuses -- which include torture, forced labor, and forced sterilization of women -- are extreme and they are extensive," Raab said during an address to the UN Human Rights Council in Geneva.