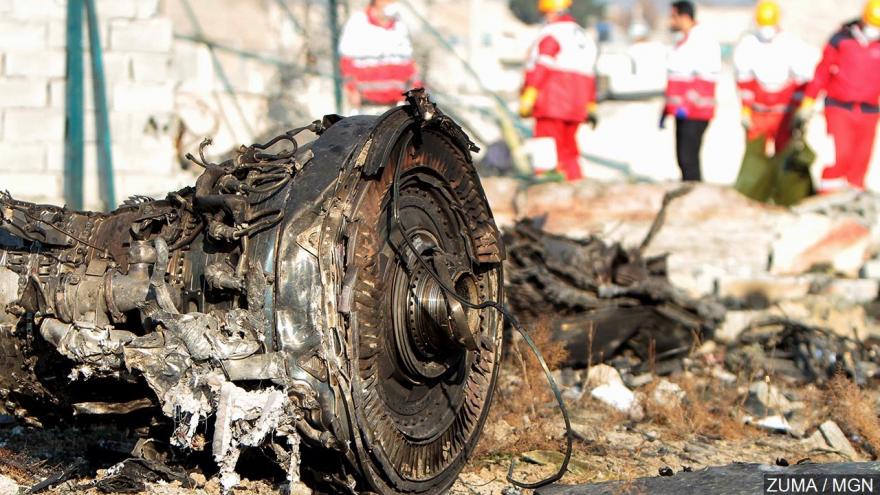 (CNN) -- The CEO of a Canadian company affected by last week's plane crash near Tehran has lashed out against the Trump administration's handling of the crisis in relations between the United States and Iran.

Michael McCain, chief executive of Canadian food packaging company Maple Leaf Foods, said one of his colleagues lost his wife and 11-year-old son after Iranian forces shot down the Ukrainian Airlines jet Wednesday, killing all 176 people on board.

McCain said Sunday night in a series of tweets posted on his company's verified Twitter account that he believes President Donald Trump's actions in the Middle East were ultimately responsible for their deaths, describing them as "the collateral damage" of an "ill-conceived plan to divert attention from political woes."

The flight crashed shortly after taking off from Tehran's airport. Iran has said that it mistakenly shot down the plane just a few hours after it fired missiles at Iraqi military bases housing US troops. The attacks on those bases came in retaliation for a US drone strike at Baghdad's airport, which killed top Iranian commander Qasem Soleimani.

"I am very angry, and time isn't making me less angry," McCain wrote, calling the recent incidents in Iran "a needless, irresponsible series of events."

"Canadians needlessly lost their lives in the crossfire, including the family of one of my MLF colleagues (his wife + 11 year old son)! " he wrote. "We are mourning and I am livid."

Despite having a modest presence on Twitter — the company's account has just over 2,400 followers — the comments stoked immediate reaction online.Around 2 a.m. Eastern Time on Monday, McCain's initial tweet had been liked about 27,000 times and retweeted 8,500 times. His additional tweets also received thousands of likes, retweets and replies.

Some social media users responded with words of support, including one person who said McCain's response "shows how much [of] an impact" the event is having on Canadians "from all walks of life."

Others, though, responded with calls to boycott the company.

"Fantastic exercise in branding," one user wrote. "Currently looking up all products produced by MLF and not going to purchase a single one from now on. It is one thing to express your personal beliefs on your own page but to do so using your companies [sic] Twitter page with logo is corporate suicide!"

Maple Leaf Foods did not immediately respond to a request for comment outside regular business hours.

The company is based in Mississauga, Ontario and employs about 12,500 people, according to its website. It produces meat and deli products, and is listed on the Toronto Stock Exchange.