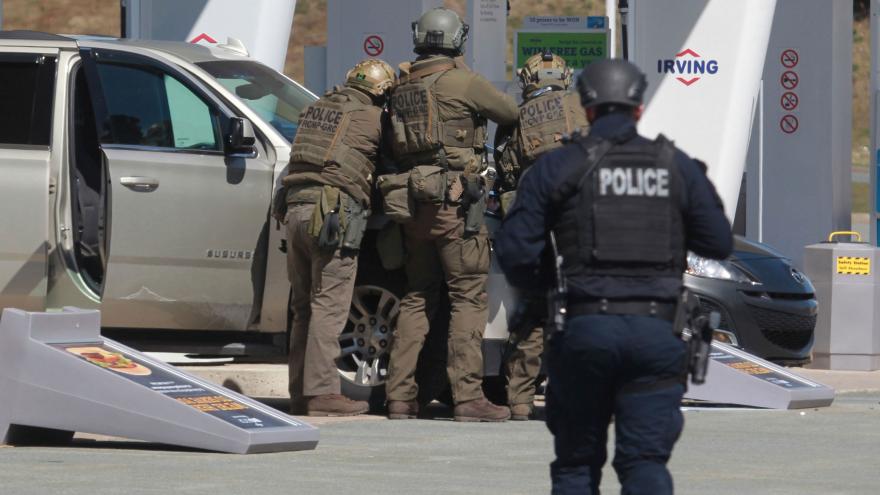 (CNN) -- Canadian police officials said on Wednesday that they failed to issue a timely public alert about the gunman responsible for the Nova Scotia shooting rampage last weekend that left 22 dead.

The Royal Canadian Mounted Police said officers were informed by a witness on Sunday, between 7 a.m. and 8 a.m., that the gunman was likely driving a lookalike police car and wearing an RCMP uniform.

At that point, police said they started the process of issuing an alert but it took several hours to make its way up the chain of command. Nearly three hours later, an alert had still not been issued.

"Nova Scotia emergency management officials contacted the RCMP to offer the use of the public emergency alerting system," RCMP Chief Superintendent Chris Leather said during a press conference Wednesday. "We were in the process of preparing an alert when the gunman was shot and killed by the RCMP."

The gunman, Gabriel Wortman, led police on a miles-long, 12-hour manhunt across the Canadian province. He died after a confrontation with police, the RCMP said.

Police officials have generated some backlash from victims families for not issuing the alert via mobile phone, TV and radio.

"I would not have let my wife leave ... if I had that broadcast come across, that he was on the loose and he was driving an RCMP vehicle," Nick Beaton, whose wife, Kristen, was killed by the gunman, told CNN partner CBC.

Prime Minister Justin Trudeau said the failure to issue an alert would be part of a larger investigation.

"I think there are many families grieving incredible losses right now who are asking themselves questions about how things could have been different, how they might have been able to be warned earlier," Trudeau said during a press conference Wednesday. "Those are extremely important questions that I know will be addressed through the investigation's conclusions."

The gunman was wearing either an RCMP uniform or a convincing replica, while driving a car that appeared to be a police vehicle, Leather said earlier this week.

Officials on Wednesday said they are looking into whether the gunman, who drove a "very real" looking police cruiser, pulled drivers over and executed victims.

"That is definitely a part of our investigation," Leather said. "That's again a concern and something that we're looking at very closely."

RCMP also said the gunman appeared to have acted alone. He did not have a license to own or operate a firearm, though police said that is still being investigated.

"We are continuing to investigate whether anyone may have assisted him leading up to the incident," Leather said.

The police refused to disclose what types of guns were used in the mass killings, specifically, whether a handgun was used.

Police are still investigating 16 crime scenes after last weekend's shootings, include five where devastating fires were set by the suspected gunman, police believe.

The rampage began when police were called about a "firearms complaint" at a property in the quiet town of Portapique on Cobequid Bay onSaturday at 10:30 p.m. (9:30 p.m. ET).

Police found several casualties in and outside the residence, Leather said earlier this week. Other bodies were found at some of the fire sites.