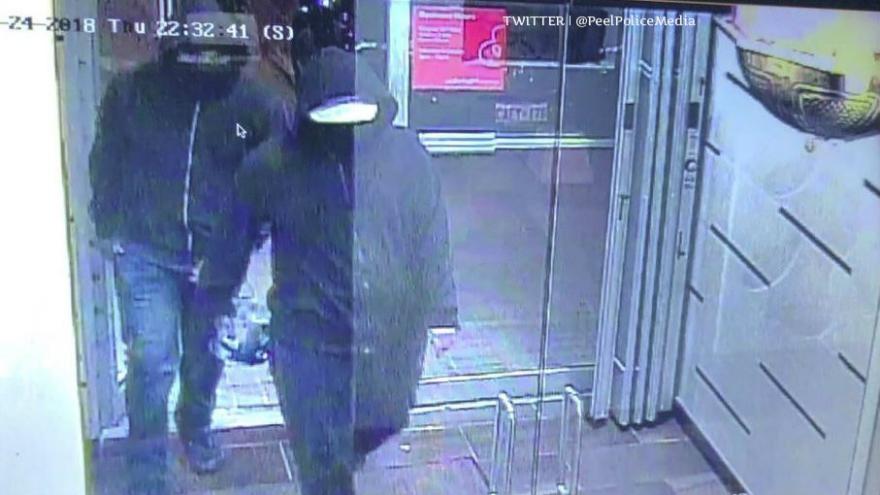 TORONTO (AP) — Police hunted for two people Friday after an explosion caused by a homemade bomb ripped through an Indian restaurant at a mall in the Toronto suburb of Mississauga, wounding 15 people.

Authorities said two people with their faces covered to conceal their identities entered the Bombay Bhel restaurant late Thursday, dropped the bomb and fled. Two birthday parties were taking place at the restaurant and about 40 people were inside, including children, though none of the youngsters were injured.

Police said Friday that all the injured had been released from the hospital. Officials initially said three Indian-Canadians suffered critical injuries and were being treated, while the remaining 12 victims suffered what Evans described as superficial injuries. The ages of the injured range from 23 to 69.

The explosion happened just after 10:30 p.m. and the plaza where the restaurant is located was still sealed off Friday. Television footage showed an injured women limping away from the restaurant.

Peel Regional Police Sgt. Matt Bertram said an object resembling a pail or paint can was carried into the restaurant by one of the bombers.

"Nothing was said by these individuals," he said. "It appears they just went in, dropped off this device and took off right away."

Bertram said authorities couldn't say what the motive was or what explosives were used.

Police asked for the public's help and released a photo of the two people, who wore dark hoodies pulled over their heads and had their faces covered.

Rafael Conceicao, a student from Sao Paulo, Brazil, was near the restaurant when the explosion occurred.

"Glass was broken in the street ... Everything was destroyed. Lots of blood in the floor. Many people were screaming. They were trying to run out from the restaurant," he said.

Mississauga Mayor Bonnie Crombie said she was thankful there were no fatalities.

"I would call it a very heinous, reprehensible act committed by cowards who came into a restaurant where people are vulnerable, celebrating with their families and where children are present," she said. "This is certainly not anything you would expect to happen in Mississauga."

The explosion came a month after the driver of a van plowed into pedestrians on a Toronto sidewalk, killing 10 people and injuring 14. Authorities have not disclosed a motive. But they have said the arrested driver, Alek Minassian, posted a message on social media referencing a misogynistic online community before the attack.

"To have two of these things happen in a short period of time is worrisome," said Ontario Premier Kathleen Wynne, adding that such events are shocking because they are rare in Canada.

Bertram said police sealed off a couple of areas east of the restaurant where footprints, a glove and other evidence were located. Police believe the suspects fled in a car.

Sanjiv Jagota, who owns a nearby store, was driving by Thursday night when he saw emergency vehicles and stopped. Standing outside the police tape, Jagota waited with the son of the Bombay Bhel's owner to see how everyone was.

He said he is good friends with the family, who started the restaurant in the 1990s. "This place is like their baby."