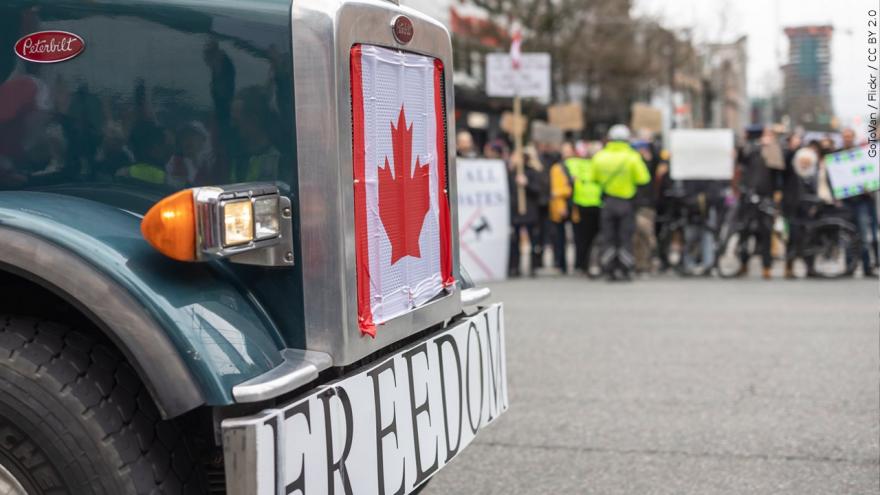 Large crowds of supporters, truckers and other protesters gather for the opposition of the COVID-19 vaccine mandate in Canada, Photo Date: 02/05/2022
By Paula Newton and Aya Elamroussi, CNN

(CNN) -- The Canadian truckers clogging key routes between Canada and the US over their opposition to Covid-19 mandates say they're not going anywhere in an act of defiance with rippling effects on both sides of the border.

The protests, which began nearly two weeks ago in Ottawa, Canada's capital, were ignited by truckers who oppose the nation's new Covid-19 rule that requires them to be fully vaccinated when crossing the Canadian-US border or face a two-week quarantine. The so-called freedom convoy has since drawn others who are resisting Covid-19 preventative measures, including mask mandates, lockdowns and restrictions on gatherings.

In addition to clogging Ottawa's downtown core, demonstrators have been occupying critical roadways between Canada and the US for days. The impact is already being felt in both nations, with US officials warning that the country could see similar protests soon. Several media outlets have also raised the prospect of parallel protests spreading to the US, while offering positive coverage of events in Canada.

In Windsor, Ontario, Ford's Essex and Annex engine plants halted production Wednesday due to supply challenges caused by the blockade at the Ambassador Bridge -- which connects Detroit and Windsor.

Ford also said it ran a reduced schedule Wednesday at its Oakville, Ontario, plant, which builds the Ford Edge and Lincoln Nautilus SUVs.

"This interruption on the Detroit/Windsor bridge hurts customers, auto workers, suppliers, communities and companies on both sides of the border that are already two years into parts shortages resulting from the global semiconductor issue, COVID and more," said a statement from Ford. "We hope this situation is resolved quickly because it could have widespread impact on all automakers in the U.S. and Canada."

"They will run with that they have at the plants, and then they'll have to send the workers home," D'Agnolo said. "We hope the protesters move away from the border. They are really impacting not only our workers but the whole community."

General Motors' Lansing Delta Township Assembly plant also canceled a production shift due to the blockade. That Michigan plant makes Buick Enclave and Chevrolet Traverse SUVs. A spokesperson said they're "working closely with our logistics providers" to mitigate any further impact on operations."

Stellantis cut operations Tuesday at its Windsor Assembly plant that builds the Chrysler Pacifica, Voyager and Grand Caravan, but resumed production on Wednesday. The automaker had to shorten the first shift Wednesday at its Brampton, Ontario plant that makes the Chrysler 300, Dodge Challenger and Dodge Charger.

Wednesday marked the third day protesters impeded access to the bridge, the busiest international crossing in North America. A coalition of business groups and chambers of commerce from both Canada and the United States voiced concern Thursday about the impact of the tie-up. The group urged federal, provincial, state, and local governments to work collaboratively to deliver rapid solutions to the illegal blockages of traffic, which now include the Ambassador Bridge and the crossing between Coutts, Alberta and Sweet Grass, Montana.

The disruptions haven't yet become serious for the auto industry, said Bernard Swiecki, director of research at the Center for Automotive Research, a Michigan think tank.

"Essentially when you look at parts that are coming into a plant, some of them have a lead time of weeks, some an hour and half to two hours," he said. Items that are crossing the border are likely to have slightly more lead times and more of a buffer due to parts on hand. Even so, Swiecki said, "you need all of those things to build a vehicle."

If this protest ends soon, automakers should be able to resume normal operations quickly.

"The longer this goes on, the more the built in buffers of given components run out, the more plants will start going down," Swiecki said.

The industry has been dealing with a variety of parts shortages, particularly computer chips, for well over a year. Those supply chain issues have caused a crimp in production for virtually all automakers. There have been widespread temporary auto plant closings as a result.

That in turn has resulted in tight inventories of cars and trucks at dealer showrooms, which have translated into record high car prices.

The blockades have burdened other truck drivers with long detours to move between the two nations.

The Blue Water Bridge connecting Port Huron, Michigan, and Sarnia, Ontario, about a 60-mile drive northeast of Detroit, is open to traffic, but there was a three-hour delay Thursday morning for Canadian-bound commercial traffic, according to Canada's website for wait times.

"These are truck drivers who are legitimately trying to traverse the border, supply our factories and continue with commerce," James Freed, city manager for Port Huron, told CNN.

The demonstrations have reached a deadlock, with many protesters refusing officials' appeals to end the contentious demonstrations popping up across the country.

"I want all these mandates gone, and I'm not leaving until all the mandates are gone. So I am here for the long haul," Dylan Friesen, a protester in Ottawa, told CNN's Donie O'Sullivan Wednesday. "They can try get rid of us, but we're not leaving," Friesen said.

Friesen explained he was let go from a job at a transport company in Ontario for not taking the Covid-19 vaccine.

"That's not right for companies be able to decide that and take away our right to earn money and support our livelihood," Friesen said.

Samuel Gauthier, who supports the truckers protesting in Canada, told CNN he's unvaccinated, which has prevented him accessing certain businesses in his home province of Quebec.

"I've said consistently we welcome the freedom of people to protest lawfully and peaceful, but this is not a lawful protest," Alberta Premier Jason Kenney said during a news conference this week.

The border crossing between Coutts, Alberta, and Sweet Grass, Montana, has also been blocked by protesters in recent days.

"This and other road blockages constitute a safety hazard a serious interference in the lives of others," Kenney said.

"The situation has become intolerable, and it has to end," Savage said. "They need to recognize that this protest is not lawful."

Similar protests may spread across the border, US officials warn

Meanwhile, US officials warned that truckers in the country could stage similar demonstrations this month in cities from coast to coast, including near the Super Bowl on Sunday.

The US Department of Homeland Security issued a bulletin Tuesday to state and local officials, saying it "has received reports of truck drivers planning to potentially block roads in major metropolitan cities in the United States in protest of, among other things, vaccine mandates for truck drivers."

A DHS spokesperson told CNN in a statement that the department "is tracking reports of a potential convoy that may be planning to travel to several U.S. cities. We have not observed specific calls for violence within the United States associated with this convoy, and are working closely with our federal, state, and local partners to continuously assess the threat environment and keep our communities safe."

A federal law enforcement official told CNN that early last week, authorities began seeing calls on a variety of online forums for the events in Ottawa to expand into the US. The official said that law enforcement and security officials guarding the Super Bowl in Inglewood, California, are preparing for any possible disruptions.