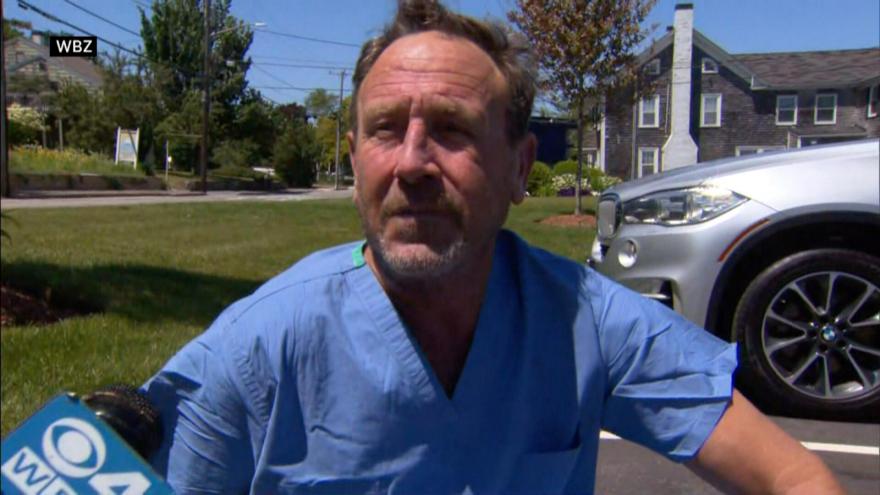 Lobster diver Michael Packard was nearly swallowed by a whale off the coast of Cape Cod on Friday, June 11.

(CNN) -- A Cape Cod lobster diver is safe Friday, following a fluke encounter with a humpback whale that nearly made him the leviathan's lunch.

Michael Packard was diving off the coast of Provincetown, Massachusetts, Friday, when the capital cetacean caught him unawares.

"I got down to about 45 feet of water, and all of a sudden I just felt this huge bump, and everything went dark," Packard told CNN affiliate WBZ. "And I could sense that I was moving, and I was like, '"Oh, my God, did I just get bit by a shark?'"

Packard, an experienced diver, told WBZ that he still had his breathing apparatus on in the whale's mouth.

"One of the things that went through my mind was just, 'Oh, my God, what if he does swallow me, and here I am, I'm breathing air, and I'm going to breathe in this whale's mouth until my air runs out?'" he said.

"I thought to myself, 'OK, this is it. I'm going to die.' And I thought about my kids and my wife," he said. "There was no getting out of there."

After what Packard estimated to be about 30 seconds in the mammal's mandibles, he said the whale surfaced quickly and spit him out.

"All of a sudden he went up to the surface and just erupted and started shaking his head," Packard said. "I just got thrown in the air, and landed in the water and I was free and I just floated there."

'A surprise to all involved'

Packard was pulled out of the water by a crewmate, rushed ashore, and taken to a nearby hospital. In the end, Packard said, he was "all bruised up," but whole.

Biologist Jooke Robbins, the director of Humpback Whale Studies at Provincetown's Center for Coastal Studies, said the unusual encounter was most likely an accident.

"We don't really see humpback whales doing anything like this normally," Robbins told CNN. "I think it was a surprise to all involved."

Robbins said that Humpbacks often engage in so-called "lunge feeding," in which a fast moving whale tries to gather a large volume of food in its mouth quickly.

"When they do that, they don't necessarily see everything," she said.

She added that Packard was unlikely to have been swallowed, as, despite their massive mouths, their throats aren't large enough for a person to fit through.

Charles Mayo, also a marine biologist at the Center for Coastal Studies, agreed.

"It's a little like sitting down to a really nice meal, and into your mouth flies a fly," he told CNN.

Mayo said his son, Josiah, is the captain on Packard's boat, responsible for tracking the diver's movements by his air bubbles. Mayo told CNN he was there when his son brought Packard ashore, and emergency services immobilized him and brought him to the hospital.

Mayo, like Robbins, could not recall a similar situation in which a diver ended up in a humpback's mouth.

Packard was in real danger, Mayo said, if not from the whale's gullet, then from the air pressure in his own lungs as the whale surfaced to spit him out.

"If you come up to atmospheric pressure, and you've held your breath, you could develop an embolism," Mayo said.

"He must have kept his cool," Mayo said. "To get out of a situation like that you have to be a top pro."

"The reason he's still around is because he's smart," Mayo said of Packard. "He's a smart guy, he's a tough guy, and he's a lucky guy."