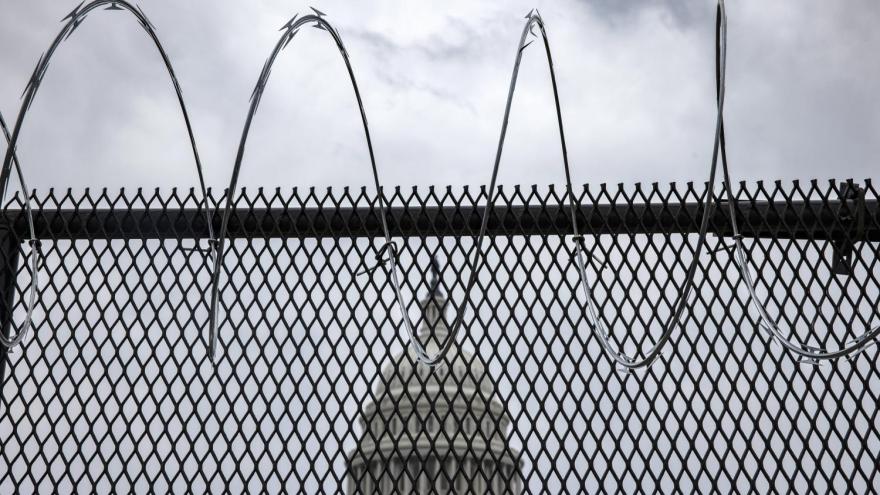 Razor wire is seen after being installed on the fence surrounding the grounds of the U.S. Capitol on January 15, 2021, in Washington, DC.

Late Tuesday afternoon, an official security alert was sent to Senate lawmakers and staffers confirming that Capitol Police officials were "closely monitoring reports for potential First Amendment activities in response to the verdict in the Derek Chauvin case" and had "decided to re-install portions of the outer perimeter fence." But just moments later, Chauvin was found guilty on all three charges against him. Moments after that, a Capitol Police spokesman told CNN that the department had no plans to put up fencing.

A separate source familiar with the security planning told CNN that the planned installation was suspended after Chauvin's guilty verdict was handed down.

"We'll reassess tomorrow based on overnight developments. If all is quiet I suspect we'll turn this off altogether," this person said.

CNN has asked Capitol Police for comment on the timing of the request.

The confusion highlights the degree to which Capitol Police leadership and those who oversee it continue to struggle with how to defend the US Capitol against a diffuse array of threats linked to high-profile events -- the kind of challenges made glaringly obvious by the department's security failures in the January 6 riot.

Cities across the country, including Washington, had been preparing for potential unrest related to the Chauvin trial since at least last week. The District of Columbia Metropolitan Police Department announced plans last Thursday to prepare for potential unrest related to the verdict. Yet the Capitol Police did not request the boosted security measures until Monday -- the day that the jury began its deliberations in the Chauvin case.

The source familiar with the planning acknowledged that the verdict came sooner than Capitol security leadership had expected, but pushed back on the notion that the request for the fencing should have been made sooner than Monday.

"The intent was to be ready when the verdict came," this person said, adding that the Capitol Police have been in daily communication with the DC Metropolitan Police. "We didn't need it last week. The violence only started last week."

Multiple sources had told CNN earlier in the day that the Capitol Police Board -- the three-person board that oversees the Capitol Police -- had approved a department request to reinstall the fencing. The source familiar with the security planning said at the time that the security officials had been closely watching "the increase in violence across the country," but emphasized that there had been no specific threats targeting the Capitol and that the planned fence would neither block traffic nor be topped with razor wire, as previous iterations had been.

"I've seen no reporting about violence or civil disturbances targeting any specific federal building," the person told CNN. "This is just an extension of the current standoff that our current fence provides further back."

But, that person added, "there was vandalism at Columbus Circle the other night. That's very close to some of the Senate office buildings."

Adding to the confusion were claims by other sources familiar with the security planning that Capitol Police initially asked for the fencing to remain in place until President Joe Biden's address to a joint session of Congress next week.

The Senate alert -- citing both the Capitol Police and the Senate sergeant-at-arms -- also appeared to catch key lawmakers by surprise. Sen. Roy Blunt of Missouri, the top Republican on the Senate Rules Committee, knocked the Capitol Police for failing to consult with his committee on the decision.

"Well, apparently the Capitol Police and the police board have no interest in sharing any of these discussions with the oversight committee," Blunt told CNN. "I'm certainly not aware of any particular threat to the Capitol, nor do I think that every time there's some incident somewhere in the country that could possibly create a public response that we can fence off the United States Capitol.

"I think it's a mistake, and maybe more importantly, as the top Republican on the Rules Committee, no one has stepped forward to explain to me why it would be necessary."

In the end, the Capitol Police and the police board appeared to determine that it wasn't.