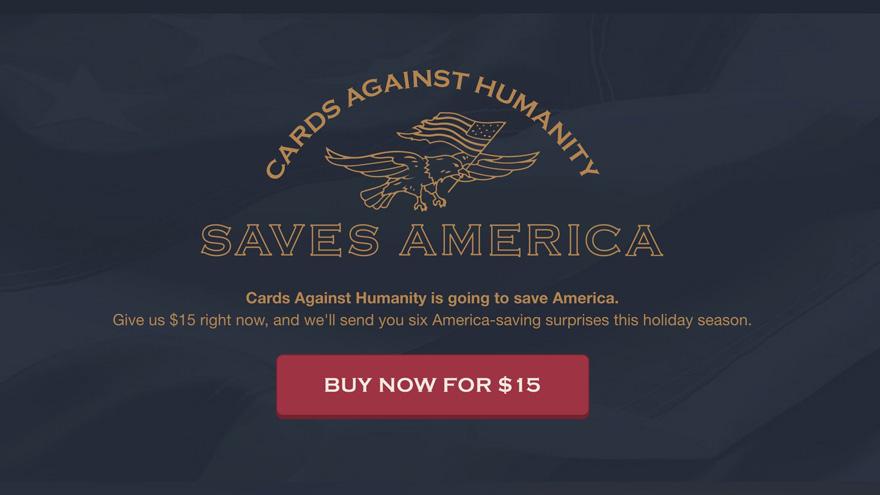 (CNN) -- Cards Against Humanity, an irreverent card game company known for its attention-seeking pranks, says it bought land on the U.S.-Mexico border to block President Trump from building his wall.

The Chicago company said on its website that this was part of a holiday promotion, for which customers could contribute to the wall-blocking project with $15 purchases for surprise gift packages.

On Wednesday morning, just a few hours after the launching the program on Tuesday, Cards Against Humanity said it was sold out.

"Donald Trump is a preposterous golem who is afraid of Mexicans," said Cards Against Humanity on its web site. "He is so afraid that he wants to build a twenty-billion dollar wall that everyone knows will accomplish nothing. So we've purchased a plot of vacant land on the border and retained a law firm specializing in eminent domain to make it as time-consuming and expensive as possible for the wall to get built."

Cards Against Humanity said that contributing to the land purchase and its legal defense was the first of six days of gifts that customers would be receiving in December.

"On Day 1, all Cards Against Humanity Saves America recipients will get an illustrated map of the land, a certificate of our promise to fight the wall, some new cards, and a few other surprises."

Customers who wanted to join in had to complete a survey that included personal questions and the query: "Who did you vote for in the 2016 election?"

The company did not say where the land is located. In a video describing the project, it says that it bought "acres" on the US-Mexico border, while displaying footage of wild horses galloping across desert scrubland.

Cards Against Humanity did not immediately respond to an email from CNNMoney asking where the land is.

The company, known for its popular "party game for horrible people," engages in pranks like selling $50,000 worth of nothing on Black Friday, which they did in 2015, and raising $100,000 to dig a "Holiday Hole" to nowhere, which they did last year.