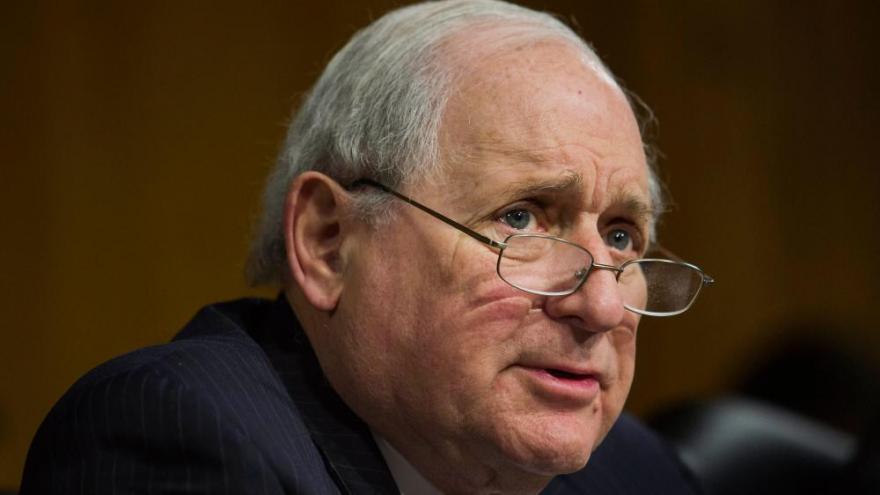 Carl Levin, a former US senator from Michigan who advanced Democratic priorities throughout his 36-year tenure in Congress, has died, the Levin Center at Wayne State University Law School said July 29 in a statement. He was 87.

(CNN) -- Carl Levin, a former US senator from Michigan who advanced Democratic priorities throughout his 36-year tenure in Congress, has died, the Levin Center at Wayne State University Law School said late Thursday in a statement.

"Whether he was chairing a hearing on critical national security issues or working on behalf of his home state, he believed that collaboration and compromise served our common purpose better than partisanship and political brinkmanship. He was a clarion voice for a military strong enough to defend our nation and uphold American values. He was a tireless advocate for the positive role that government can play in the lives of the American people and a relentless watchdog ensuring that government programs meet their commitments," the statement from the Levin family and Levin Center says in part.

First elected to Congress 1978, Levin was the longest-serving US senator in Michigan's history. A Swarthmore College graduate who earned his law degree at Harvard, Levin prioritized civil rights advocacy early in his career through work at the Michigan Civil Rights Commission. He leveraged his work as a public defender in Detroit -- where he grew up -- and on the Detroit City Council to launch a national political career that saw him become a champion of the Democratic Party.

In Washington, he was known as a hardworking and pragmatic legislator who often worked across the aisle even in an increasingly partisan climate.

Beyond his nine years as chairman of the Armed Services Committee, Levin's decades in the Senate were defined by his advocacy for tax reform and promotion of US manufacturing jobs, particularly the auto industry.

"Holding government accountable and ensuring that legislatively authorized programs are run effectively and efficiently were major guideposts during my service on the Detroit City Council, during my first campaign, and throughout my Senate career," Levin wrote in his 2021 memoir, "Getting to the Heart of the Matter."

"As a former local official, I understood the importance of responding to people in need, listening to even the smallest voice, and working hard on behalf of the people with honesty, integrity, and civility."

An understated public servant, Levin had won most of his elections by a wide margin even as he confronted thorny political issues at home and abroad -- including voting against then-President Ronald Reagan's tax cuts and, later, the Iraq War.

He announced his retirement in 2013, calling it an "extremely difficult" decision because of his "love for representing the people of Michigan in the U.S. Senate and fighting for the things that I believe are important to them."

Still, Levin continued to engage in politics even after exiting Congress and joining a private law firm, Honigman Attorneys and Counselors -- including a full-throated endorsement of then-candidate Joe Biden in March 2020.

"All the Democratic candidates would be superior to four more years of endless Trump lies and divisiveness and incivility. All would end Trump's relentless injection of venom against those who disagree with him and his endless elevation of his personal interest and ego above the interests of the nation," Levin said in a statement at the time.

Levin is survived by his wife, Barbara, and his three daughters, Erica, Laura and Kate, whom he credited in his memoir as vital to his long political career.

"Throughout my career, Barbara (and at times our daughters) has been my thought partner on many issues and projects on which I've embarked, her keen intellect helping me think through the decisions and actions that I've taken," Levin wrote.

"I have been very fortunate to have both a challenging and meaningful work life and a rich family life. This was due in great part to the support and understanding of Barbara and our daughters."

This story has been updated with further details and background.