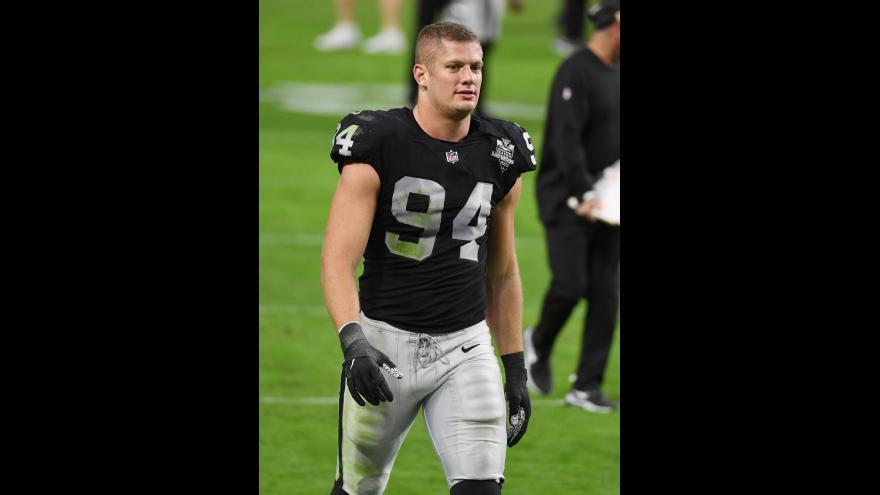 Carl Nassib, a defensive lineman with the Las Vegas Raiders, became the first active NFL player in league history to announce that he is gay.

(CNN) -- Carl Nassib, a defensive lineman with the Las Vegas Raiders, became the first active NFL player in league history to announce that he is gay.

"What's up, people," Nassib said Monday in a video on Instagram. "I'm Carl Nassib. I'm at my house here in West Chester, Pennsylvania. I just wanted to take a quick moment to say that I'm gay. I've been meaning to do this for a while now, but I finally feel comfortable enough to get it off my chest."

Nassib, 28, has played five years with three teams and is entering his second season with the Raiders. He said in a statement accompanying the video that he had agonized over the decision to announce he was gay for 15 years.

Nassib added that he was a private person and wasn't seeking publicity.

"I just think that representation and visibility are so important," he said. "I actually hope that one day videos like this and the whole coming out process are just not necessary. But until then, I'm going to do my best and do my part to cultivate a culture that's accepting, that's compassionate."

"The NFL family is proud of Carl for courageously sharing his truth today," Goodell said. "Representation matters. We share his hope that someday soon statements like his will no longer be newsworthy as we march toward full equality for the LGBTQ+ community. We wish Carl the best of luck this coming season."

The defensive end was drafted out of Penn State by the Cleveland Browns in the third round of the 2016 NFL draft. He played for the Browns from 2016-2017, the Tampa Bay Buccaneers in 2018 and 2019 and was signed by the Raiders as an unrestricted free agent on March 23, 2020.

Nassib said he was donating $100,000 to The Trevor Project, a suicide prevention and crisis intervention organization for LGBTQ youth. He wrote in his statement that it saddened him that LGBTQ youth are at an elevated risk for suicide.

Amit Paley, CEO and executive director of The Trevor Project, said the donation will help scale up crisis services.

"The Trevor Project is grateful to Carl Nassib for living his truth and supporting LGBTQ youth," Paley said in a statement emailed to CNN. "Coming out is an intensely personal decision, and it can be an incredibly scary and difficult one to make. We hope that Carl's historic representation in the NFL will inspire young LGBTQ athletes across the country to live their truth and pursue their dreams.

"At a time when state lawmakers are actively trying to restrict transgender and nonbinary youth's participation in school sports, this news should serve as a clarion call for greater LGBTQ inclusion in the locker room and on the field."

Jason Collins, who became the first openly gay NBA player when he suited up for the Brooklyn Nets in 2014, was cheering Nassib on social media.

"Very proud of Carl Nassib! Incredibly happy for him and can't wait to watch him play this upcoming season!" he tweeted.

"The ability to live an authentic life is so important," she wrote.

"Carl Nassib's powerful coming out is a historic reflection of the growing state of LGBTQ visibility and inclusion in the world of professional sports, which has been driven by a long list of brave LGBTQ athletes who came before him," said Ellis in a statement.

"As an accomplished athlete who is now the first out gay active player in the NFL, Carl Nassib's story will not only have a profound impact on the future of LGBTQ visibility and acceptance in sports, but sends a strong message to so many LGBTQ people, especially youth, that they too can one day grow up to be and succeed as a professional athlete like him," the statement said.

"I am very proud of Carl for his courage and voice. This announcement doesn't surprise me because if you know Carl, you know his strength. Carl's story continues to add chapters which will have an impact well beyond the field of play," he said in a statement. "His care and love for those around him, particularly those in need, has always been obvious. ... Carl's brave announcement will forge a path for others to be true to their authentic self."

The Raiders also tweeted they were proud of Nassib.

Pro Football Hall of Famer Warren Moon added to the chorus of people proud of him, and the former NFL and CFL quarterback added that he played with some guys who were gay but didn't feel comfortable coming out.

"As long as they helped us win and were great teammates- their sexual preference was never a issue," he wrote on Twitter.

"We live in a different time now where diversity is much more accepted. Cheers Carl, and I hope this lets other athletes know, its OK to say who you are."

In his Instagram statement, Nassib thanked family and friends. He also thanked the league, his coaches and other players.

"I would not have been able to do this without them," he wrote. "From the jump, I was greeted with the utmost respect and acceptance."

Nassib wrote that he was standing on the shoulders of people who paved the way.

"I do not know all the history behind our courageous LGBTQ community," he said, "but I am eager to learn and to help continue the fight for equality and acceptance."

Michael Sam came out before 2014 draft

In 2014, Michael Sam became the first openly gay player to be selected in the NFL draft when the St. Louis Rams chose him in the seventh round as the 249th overall pick. The Rams cut Sam just before the season started.

Sam signed with the Dallas Cowboys practice squad but never was on the active roster. He was cut after six weeks.

In 2015, he appeared in one game with the Montreal Alouettes of the Canadian Football League before leaving the team.

Other NFL players have come out after they retired, including former Dallas Cowboys linebacker Jeff Rohrer, who married Joshua Ross in 2018.