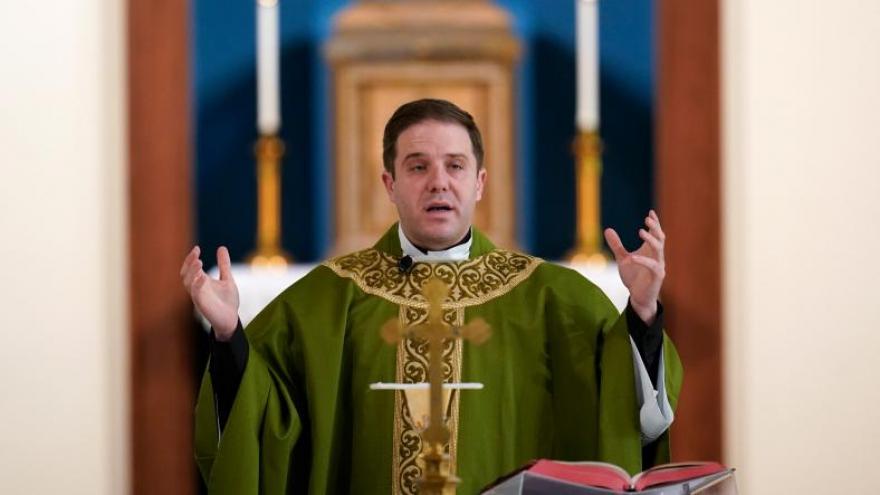 Father Matthew Hood, a priest in the Detroit archdiocese, discovered the invalid baptisms when he pulled up a video of his own baptism and noticed the problem with the language.

(CNN) -- After hundreds of Catholic baptisms performed in Michigan between 1986 and 1999 were deemed invalid because of the language used during the ritual, the Archdiocese of Detroit is still trying to remedy the situation.

The case mirrors a recent predicament for the Catholic Church in Arizona, where it was discovered that a priest had performed invalid baptisms throughout most of his more than 20-year career.

The Michigan situation was uncovered in August 2020 when Father Matthew Hood, a priest in the Archdiocese of Detroit, pulled up a video of his baptism as an infant and discovered an unexpected turn of events.

Deacon Mark Springer, who performed his baptism, "decided to change the proper words (formula) to baptism, using 'We baptize' as opposed to 'I baptize,'" according to a letter outlining the events released in August 2020 by Archbishop of Detroit Rev. Allen Vigneron.

And just like that, Hood's baptism was not valid, according to the church.

Baptism is one of seven sacraments in the Catholic faith, according to the United States Conference of Catholic Bishops. The six others are confirmation, Eucharist, reconciliation, anointing the sick, marriage and holy orders.

And because Hood's baptism was not valid, his status as an ordained priest was in turn invalidated, according to The Detroit Catholic, the official digital news service of the Archdiocese of Detroit. He moved quickly to get baptized, confirmed and ordained a priest.

CNN reached out to Springer and Hood but did not hear back.

Nearly 18 months since the discovery of the language change, the Archdiocese is still seeking anyone who may have received the sacrament from Springer in St. Anastasia Parish in Troy, which is about 20 miles north of Detroit.

"When conferring any Sacraments, the minister is to use only the I, and when Deacon Springer did not use the prescribed formula, "I baptize you in the name of the Father, and the Son and of the Holy Spirit," to baptize, unfortunately, those baptisms are considered 'invalid,'" Fr. Steven Wertanen said in a letter to parishioners.

The church has identified 782 baptisms as 'presumed' invalid, the spokesperson for the Archdiocese of Detroit, Holly Fournier, told CNN in the email.

"In August 2020, the Archdiocese of Detroit and St. Anastasia Parish launched outreach efforts including letters mailed directly to those impacted, parish and archdiocesan announcements, and widespread media coverage," she said.

Since then, 455 individuals out of the 782 baptisms have not responded, according to Fournier.

She added that video footage of 199 baptisms confirmed validity and that 71 baptisms were remedied through "Sacraments of Initiation (Baptism, Holy Communion, and Confirmation)."

Ten people responded but declined to move forward with their sacraments, and 47 others are in the process of making arrangements for baptism.

"The Archdiocese and St. Anastasia Parish remain committed to serving those impacted and are still actively addressing any remaining cases that come forward," she said.

As St. Anastasia Parish and The Archdiocese of Detroit continue to address those baptisms that are invalid, Fournier said the possibility exists that this issue will continue to come up in other dioceses.

In Phoenix, Father Andres Arango resigned after a church investigation found that he performed them invalid baptisms by replacing "we" with "I," according to Bishop Thomas Olmsted of the Diocese of Phoenix.

"The issue with using 'We' is that it is not the community that baptizes a person, rather, it is Christ, and Him alone, who presides at all of the sacraments, and so it is Christ Jesus who baptizes," Olmsted wrote in a message to parishioners posted last month.