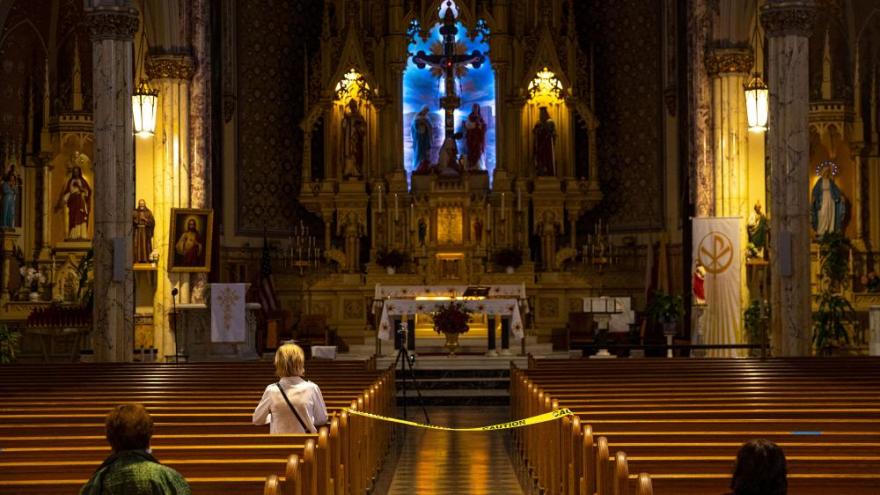 The Supreme Court is once again considering arguments from houses of worship that say pandemic-related restrictions are violating their religious freedom rights. This image shows churchgoers social distancing at the St. Stanislaus Kostka Catholic Church in Brooklyn, New York, on June 11, 2020.

(CNN) -- While incidences of Covid spike across the country, the Supreme Court is once again considering arguments from houses of worship that say pandemic-related restrictions are violating their religious freedom rights.

The two latest cases arise out of New York as a Roman Catholic Diocese in Brooklyn and a group of Orthodox synagogues are challenging Democratic Gov. Andrew Cuomo's executive order limiting in-person attendance at houses of worship to 10 or 25 people in geographic "red" and "orange" zones.

The disputes tee up another test for a court that has already closely divided 5-4 on the issue, and highlights not only the role of Chief Justice John Roberts, who sided against churches in related cases from California and Nevada, but also Justice Amy Coney Barrett, whose vote could represent a solid indication of the court's rightward turn since the death of Justice Ruth Bader Ginsburg.

It comes as the US has recorded more than 100,000 daily infections for two weeks straight, and Justice Samuel Alito has lashed out at his colleagues, accusing them of failing to properly consider the First Amendment rights of houses of worship.

Alito did not mince words during a speech last week about his feelings of attendance limits.

"We have never before seen restrictions as severe, extensive and prolonged," Alito told a Federalist Society audience, adding that the pandemic has resulted in "previously unimaginable restrictions on individual liberty."

The Covid crisis, Alito said, has served as a "sort of constitutional stress test."

Lawyers for the Brooklyn diocese, which is composed of 186 parishes and 210 total churches, say that the New York order "effectively closes" churches and other houses of worship but allows businesses deemed essential by the governor -- including supermarkets, pet stores and hardware stores -- to remain open.

"In short, the pandemic alone cannot justify overbroad, untailored closure orders of indefinite duration directed at all houses of worship that in another time would plainly be found to violate the Constitution," the lawyers say in court papers. The so-called "Cluster Initiative" -- aimed at neighborhoods -- went into effect on October 6.

On Wednesday New York state Attorney General Letitia James, representing Cuomo, responded to the Supreme Court, calling the restrictions an effort to balance the need to protect residents and "help them return, as much as possible, to their normal lives."

James argued that in some instances houses of worship are treated "more favorably than comparable gatherings" such as concerts and other large indoor gatherings.

She said the state Department of Health had identified ZIP codes with the highest Covid-19 rates to identify problematic clusters and then had initiated restriction zones. She highlighted a "documented history of religious gatherings serving as Covid-19 super-spreader events."

James added that businesses that have been allowed to remain open do not share religious services' specific risk factors, which include large numbers of people from different households arriving simultaneously, congregating for an extended period to speak, sing or chant and then leaving simultaneously.

A federal appeals court ruled in favor of Cuomo.

In addition, earlier this week lawyers for Orthodox Jewish synagogues in New York as well as a national Orthodox Jewish organization filed a separate petition challenging the same executive order. They argue that Cuomo expressly targeted the Orthodox Jewish community because he claimed their neighborhoods violated prior rules.

"The governor's targeting of a religious minority for blame during a pandemic, falsely tarring them as perpetrators rather than victims of the virus, is incompatible with the Free Exercise Clause," the lawyers said.

Eric Rassbach, a senior lawyer at Becket Law representing the synagogues, said in an interview that the "real question here is whether there are any constitutional guardrails on the Covid-19 response, or do the court simply stay out completely?"

"The history of things like Japanese internment and the treatment of Jehovah's Witnesses during World War II show that it is precisely during times of national peril that our courts must stand as guardians of our most basic beliefs," he said.

Rassbach distinguishes his case from two cases yearlier this year where churches out of Nevada and California sought to block restrictions on in-person worship services. Back then, a 5-4 court ruled against the religious institutions with Roberts joining the left side of the bench. In an attempt to sway Roberts, Rassbach notes that those orders came out earlier in the pandemic and argues that the Cluster Initiative specifically targets Orthodox Jews.

In the California case last May, Roberts said the rules put in place appeared consistent with the Free Exercise Clause of the Constitution and that the churches were treated comparably to secular gatherings including lectures, concerts, movie showings, spectator sports and theatrical performances.

"Our Constitution principally entrusts the safety and the health of the people to the politically accountable officials of the States to guard and protect," Roberts said.

It is a point stressed by the American Medical Association, which has filed a brief in support of Cuomo. Lawyers for the association stress that Covid-19 is the "greatest public health emergency in a century" and that governments have had to make difficult choices in order to protect citizens.

"Remaining in close proximity indoors for long durations, as well as singing and talking, make attendance at religious service, risky, even if congregants follow precautions," the brief says and notes that the restrictions are similar to those for indoor sporting events, bars and indoor restaurants.

Alito has objected to the comparisons to secular gatherings.

In his Federalist Society speech last week, he lambasted the governor of Nevada who, he said, had allowed fewer restrictions to casinos than houses of worship.

"If you want to worship and you are the 51st person in line, sorry you are out of luck," he said. "The state's message is this: forget about worship and head for the slot machines or maybe a Cirque de Soleil show."