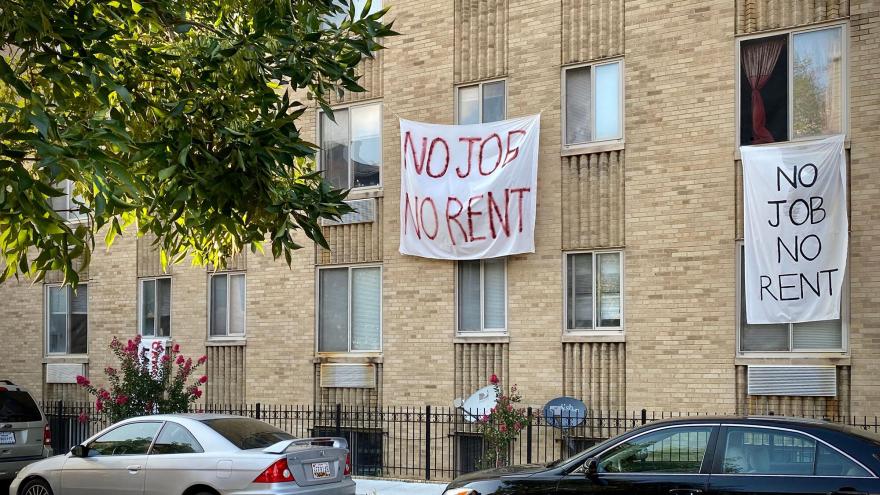 The Centers for Disease Control and Prevention is moving to temporarily halt evictions for some Americans struggling to pay their rent due to the pandemic. This image shows banners against renters eviction reading no job, no rent displayed on a controlled rent building in Washington, DC on August 9, 2020.

(CNN) -- The Centers for Disease Control and Prevention is moving to temporarily halt evictions for some Americans struggling to pay their rent due to the pandemic by broadening protections already in place, an extraordinary move intended to stave off an impending eviction crisis nationwide.

The White House said the order will apply to Americans who qualified for direct payments under the CARES Act, which covered individuals who earn less than $99,000 a year. People will also have to prove that they've made efforts to get government assistance for their rental payments, declare that their inability to pay is because of financial hardship due to Covid-19 and that they would likely become homeless if they were evicted.

Under the CARES Act, only renters in federally backed units were protected from eviction, and there's also a moratorium on evictions and foreclosures for federally backed, single-family home mortgages. Tuesday's move covers any rental unit in the United States so long as the requirements are met, an official said.

The move, however, falls short of what some Democrats have called for: setting aside federal dollars for rental assistance. Some distressed borrowers are going to need the help when back rent comes due in January. But providing that kind of money would require an act of Congress, which has so far deadlocked on additional stimulus measures.

In a conference call with reporters, administration officials pointed to the CDC director's authority "to take measures that are reasonably necessary to mitigate the spread of communicable disease," when asked why the move would come from a health agency. The agency's move comes after President Donald Trump signed an executive action last month that directed the CDC to look at temporarily halting evictions to prevent the further spread of the coronavirus.

"Congress has delegated broad authority to (the Department of Health and Human Services), the Surgeon General and CDC, to take reasonable efforts to combat the spread of communicable diseases, and frankly I think it makes sense for those authorities abroad because we don't know for any given situation or scenario what steps will be needed to stop the spread," an administration official told reporters. "The home has been sort of the focal point of people social distancing and building sort of a safe space for themselves over the past few months."

The official also said people "may end up in overcrowded congregated living facilities or homeless shelters, and that is a potential recipe for a big spread of Covid-19."

Asked why that authority wasn't being used to enact a federal mask mandate, officials refused to answer because the question didn't "have to do with the call at hand."

"We want to be clear that those who benefit from this assistance, are still obligated to pay any accrued rent or housing payments in accordance with their lease or contract," a senior administration official said.

The ongoing economic fallout of coronavirus, coupled with the failure of Congress to pass additional stimulus measures, has turned attention to the possibility that many renters across the nation could find themselves unable to keep up with their payments.

The Federal Housing Finance Agency announced last week that Fannie Mae and Freddie Mac will extend the moratoriums that were put in place on single-family foreclosures and on some evictions until at least December 31. The moratoriums had been set to expire at the end of August.