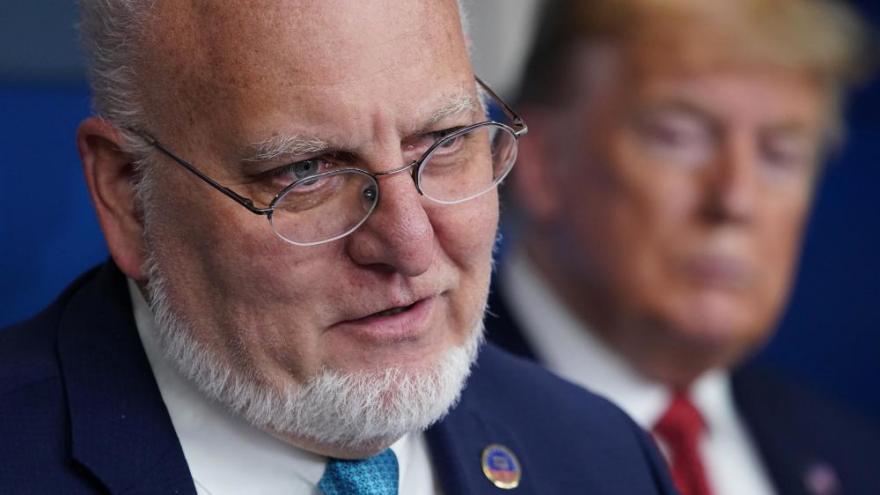 CDC Director Robert R. Redfield speaks as US President Donald Trump listens during the daily briefing on the novel coronavirus, which causes COVID-19, in the Brady Briefing Room of the White House on April 16, 2020, in Washington, DC. (Photo by MANDEL NGAN / AFP) (Photo by MANDEL NGAN/AFP via Getty Images)

(CNN) -- The US Centers for Disease Control and Prevention will not revise its guidelines for reopening schools despite calls from President Donald Trump and the White House to do so, agency Director Dr. Robert Redfield said Thursday.

As anxious parents and educators across the country hand wring over how to safely bring children back to the classroom, the discord between Trump and his top health advisers over appropriate precautions has added another layer of uncertainty.

The President, against the advice of some of the nation's top health officials, has repeatedly called for schools to reopen as coronavirus cases surge across the country.

On Wednesday, while Dr. Anthony Fauci, the nation's leading infectious disease expert, warned that the country has to maintain control over the pandemic to get children back to school in the fall, Trump slammed the CDC's existing guidelines.

He tweeted they were "very tough" and "expensive," while in another tweet threatened to cut off school funding if they resisted opening, though the federal government's ability to do so is limited.

The CDC guidelines for schools to reopen contain steps to keep children safe, including keeping desks to be placed six feet apart and for children to use cloth face coverings. The CDC suggests the closing of communal areas like dining rooms and playgrounds and the installation of physical barriers like sneeze guards where necessary.

In a coronavirus task force briefing later Wednesday afternoon, Redfield appeared to backpedal on the existing guidelines and said they should not be used as an excuse for not returning children to classrooms, which encourage hygiene, the use of cloth face coverings and staying home when appropriate.

"Remember, it's guidance, it's not requirements, and its purpose is to facilitate the reopening and keeping open the schools in this country," Redfield had said.

Responding to a question on the President's tweet slamming the guidelines, Vice President Mike Pence told reporters the CDC would be issuing a new "set of tools" next week.

"The President said today we just don't want the guidance to be too tough, and that's the reason why, next week, the CDC's going to be issuing a new set of tools, five different documents that will be giving even more clarity on the guidance going forward," Pence said.

Redfield's Thursday claim that the CDC wouldn't be changing any guidelines added to the confusion.

In response to comments about the guidelines being too tough or impractical, Redfield said it depends on how they are put together.

"Right now, we're continuing to work with the local jurisdictions to how they want to take the portfolio of guidance that we've given to make them practical for their schools to reopen," he said.

A senior administration official insisted that everyone was on the same page, noting that Pence had never said the guidelines would be changed. Ahead of a White House coronavirus taskforce briefing Wednesday following the President's tweet, Redfield assured taskforce members, including Pence, that additional guidelines would be issued next week.

Earlier in the week, a senior US Centers for Disease Control and Prevention official told CNN's Nick Valencia that "schools should be the first to open and the last to close," adding that "kids need to physically be in school."

The senior CDC official with knowledge of discussions also said the agency was planning to release new guidance on how best K-12 students can physically return to the classroom this year, though the exact timetable for the proposed new guidance is unclear.

The recommendation was presented internally to leaders at the CDC early last week and is "a priority this week," according to the senior official.

Over the weekend, senior officials at the agency presented Redfield with details on the science behind why schools should reopen, the source said.

The specifics of the guidance were not available.