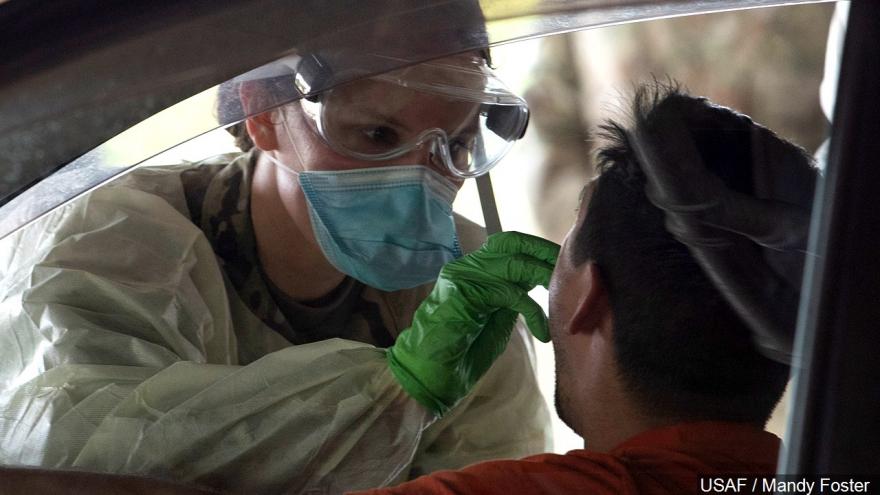 (CNN) -- The US could suffer 130,000 coronavirus deaths by July 4, according to a projection released Friday by the Centers for Disease Control and Prevention.

And Covid-19 cases could rise this summer as states reopen, the CDC's deputy director for infectious diseases said during a conference call with reporters.

"If anything, we must be overprepared for what we might face later this year," said Dr. Jay Butler. "Getting the flu vaccine will be more important than ever, as flu and Covid-19 could be circulating together as we move into the fall and winter months."

More cities and states across the country have reported increasing rates of new coronavirus cases per day as the nationwide total number of cases passed 2 million this week.

According to a CNN analysis of data from Johns Hopkins University, 19 states have increasing case rates, several of which have seen record or near-record highs.And for the first time, rising caseloads have led some officials to delay phased re-opening plans.

Months into the pandemic, more than 113,800 people have died, according to Johns Hopkins, with about 1,000 deaths reported each day.

"We know the pandemic is not over," Butler said.

Also Friday, the CDC released new guidelines that say public transportation and travel can still be risky and people need to think twice before they leave home.

The public transportation guidelines, posted last month, remind people to wash their hands before and after using trains, buses, subways and other shared transport.

"During travel, try to keep at least 6 feet (2 meters) from people who are not in your household — for example, when you are waiting at a bus station or selecting seats on a train," the guidelines read. "Wear a cloth face covering when physical distancing is difficult."

"COVID-19 cases and deaths have been reported in all 50 states, and the situation is constantly changing. Because travel increases your chances of getting infected and spreading COVID-19, staying home is the best way to protect yourself and others from getting sick," the CDC says.

This week's national forecast relies on 17 individual forecasts from outside institutions and researchers. The projections forecast about 130,560 deaths by Independence Day, with a possible range of 124,260 to 139,880 deaths.

"The state-level ensemble forecasts suggest that the number of new deaths over the next four weeks in Arizona, Arkansas, Hawaii, North Carolina, Utah, and Vermont will likely exceed the number reported over the last four weeks," the CDC says on its forecasting website.

Here's a breakdown of some of the states that have seen rising numbers of infections.

Texas's new case rates have been far higher than they were in the preceding two months, averaging 1,729 new cases per day over the week ending June 11, according to a CNN analysis of Johns Hopkins data.

A spokesman for the Texas Department of State Health Services told CNN Thursday that there were just over 2,000 new cases, warning, "This is still a serious situation."

"People still need to be taking action to protect themselves and their communities by continuing social distancing, wearing a face covering in public, and continuing to wash their hands and disinfect surfaces frequently," spokesman Chris Van Deusen said.

Officials in Harris County, which includes Houston, said hospitalizations are the highest to date. While they believe they can handle the rise for now, they're preparing to re-open Houston's NRG Stadium as a field hospital.

Dr. Aileen Marty, an infectious disease expert at Florida International University in Miami said a "small part" of the increase was testing, "but it truly is a real increase in cases." That rise could be exacerbated by people not wearing masks or social distancing, Marty said, and by the use of tear gas at recent protests following the police killing of George Floyd in Minneapolis.

"The use of these gases is very serious ... because it damages the airways," Marty said. "It damages the exact airways that our bodies need to fend off this virus."

Arizona Gov. Doug Ducey said Thursday the state had the hospital capacity to deal with a recent spike in cases, adding it was not serious enough to reestablish economic restrictions.

According to the state, Arizona hit a peak of 79% of intensive care hospital beds in use on Tuesday, while the use of ventilators rose to an all-time high of 38% on Wednesday.

Ducey said the hospital bed rate does not include an additional 2,600 "surge" beds set aside in the event of a dramatic rise.

The mayor of Phoenix, however, said the state is not recovering from Covid-19.

"We have had so many of the records you don't want to be hitting for Covid-19 from my perspective," Mayor Kate Gallego said at a panel discussion with other mayors hosted by the Center for American Progress. "We opened too much too early and so our hospitals are really struggling."

Gallego attributed the spike primarily to the lifting of the state's stay-at-home order on May 15.

In California, Los Angeles hit a near-record high in cases, even as the county moves toward Phase 3 of its re-opening plan on Friday, allowing businesses like gyms, museums, day camps and TV production to resume operations.

Los Angeles County reported 1,857 new cases on Thursday, the second-highest number reported in one day.A news release noted that 600 of those cases were from a backlog of test results.

"We are still in the biggest medical pandemic of our lives," he said, urging those who participate in protests to quarantine for 14 days or get a Covid-19 test.

Some coastal towns in South Carolina are canceling July 4 events as the state experiences its own rise in cases, including in Myrtle Beach.

A city spokesman told CNN Thursday the area had seen an upward trend, and he's telling vacationers to "bring your mask and your patience."

The trend in Myrtle Beach mirrored a situation playing out across the state. South Carolina's top epidemiologist Dr. Linda Bell said in a news conference Wednesday that the last two weeks have brought the highest daily numbers since the beginning of the pandemic.

"Today I am more concerned about Covid-19 in South Carolina than I've been before," she said.

Nashville city officials on Thursday said they would delay the next phase of the city's re-opening due to an increase in coronavirus cases. The Metro Public Health Department announced an increase of 56 cases, bringing the total in Nashville and Davidson County to 6,627.

According to a statement from Mayor John Cooper, the "majority of our public health metrics are satisfactory." But the 14-day new case average "remains slightly elevated," Cooper said.

Oregon Gov. Kate Brown, a Democrat, also decided to delay re-opening plans by one week because of increased cases.

"We now see a significant increase in Covid-19 infections in counties across Oregon," Brown said in a series of tweets, "and it is cause for concern."