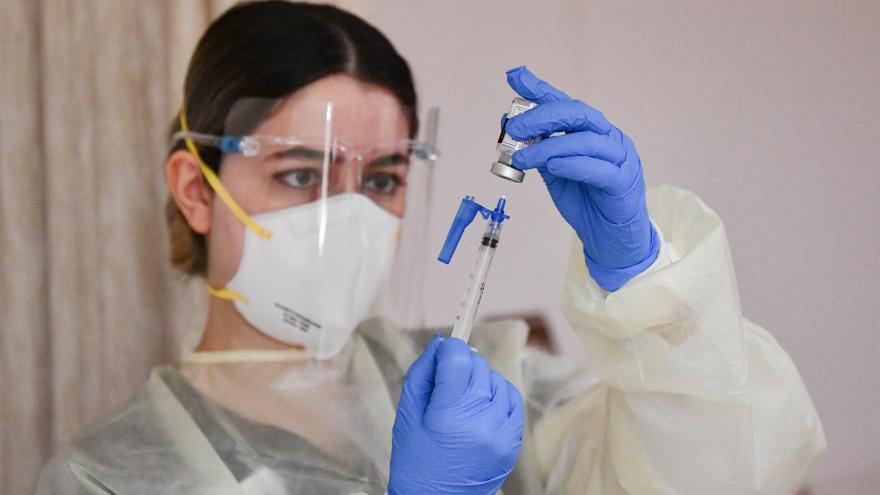 (CNN) -- The US Centers for Disease Control and Prevention reported its biggest one-day increase in Covid-19 vaccinations Friday as more states said they are struggling with vaccine supply.

The CDC said Friday that nearly 1.6 million more doses of the vaccines have been administered, bringing the total of doses given to more than 19 million.

And 1 million new shots were reported in the previous 24-hour period, according to changes in CDC data from Wednesday morning to Thursday morning. That was only the second time a one-day increase rose above 1 million. The number of administered doses reported this week also was 22% higher than last week.

While vaccinations are taking off, more states are complaining that they don't have enough vaccine. New York will run out of Covid-19 vaccine doses Friday after using 97% of the first doses it received, Gov. Andrew Cuomo said.

In Louisiana, there's no need to set up a mass vaccination site because the state doesn't have enough vaccine doses to make it worthwhile, said Gov. John Bel Edwards.

"I cannot be any more clearer. We have built the infrastructure that can handle this job. We need the doses," Murphy said Friday.

White House press secretary Jen Psaki said the White House has asked the CDC to look into the possibility that states might run out of their allocated doses.

"We've asked the CDC, to look into exactly this issue, and see what can be done," Psaki said at Friday's White House briefing.

After conversations with the vaccine makers on a "very regular basis," President Joe Biden's coronavirus advisers are confident the supply will increase in the near future, said Dr. Vivek Murthy, Biden's nominee for surgeon general.

"Those conversations, I think, have given us more confidence that there is more supply coming, and that it will continue to steadily increase over the next few months," Murthy said Friday on a webcast sponsored by the US Conference of Mayors.

The 19 million doses administered to people represent about 48% of the 39.8 million doses that have been distributed, according to the CDC.

About 5% of the US population -- roughly 16.2 million people -- has received at least one dose of the vaccine, and 2.75 million people are fully vaccinated, according to CDC data updated Friday morning.

States have 72 hours to report vaccine data, so data published by the CDC may be delayed -- and may not necessarily mean all doses were given on the day reported.

Officials hope new coronavirus vaccines will be approved and help with supply.

Currently, the US has two approved vaccines, by Pfizer and Moderna.

Johnson & Johnson's vaccine candidate is "right around the corner" from seeking emergency use authorization from the Food and Drug Administration said Dr. Anthony Fauci, chief medical adviser to President Joe Biden, on Thursday.

"They're probably a couple of weeks away from getting the data looked at, to have the FDA evaluate whether or not we're in a situation where we could move ahead and start thinking about getting it out into the public," Fauci said.

The company, assuming it receives FDA approval, plans to have "enough vaccines for 100 million Americans by spring," board member Dr. Mark McClellan told CNBC on Thursday.

That candidate would come with advantages, including that it would be a single shot, and that it doesn't require storage at extremely low temperatures, he said.

As for another candidate in Phase 3 trials, from AstraZeneca, that is "a bit behind, but not too far behind," Fauci said.

Last week, the federal government's Operation Warp Speed program's chief adviser said he hoped the AstraZeneca candidate, if data shows it to be effective, could receive US authorization by the end of March.

"Hopefully the vaccine again is efficacious, as has been shown in the trials conducted in Brazil and in the UK," said Operation Warp Speed chief science adviser Moncef Slaoui. "So maybe an approval somewhere towards the latter part of the month of March, and a significant number of doses available around that time."

The AstraZeneca vaccine is already in use in some places, including the UK and Brazil.

US could be almost back to normal by fall, Fauci says

Despite challenges with distributing and administering Covid-19 vaccines, the US "can and should" vaccinate 70-85% of adults by the end of summer, Fauci said.

That could bring a semblance of normalcy by the fall, according to Fauci, the director of the National Institute of Allergy and Infectious Diseases.

"When you put ... the pedal to the floor, you can get it done," Fauci told CNN's Chris Cuomo on Thursday night.

If the US were to administer 1 million shots per day -- the pace required to meet President Joe Biden's goal of giving 100 million shots in his first 100 days in office -- it would take until the end of 2021 to fully vaccinate 75% of US adults, assuming every recipient needs two shots, according to a CNN analysis.

But that time frame would shrink if some people received one-dose vaccines, such as Johnson & Johnson's candidate.

And Fauci said Friday he believes the US can go faster than 1 million shots per day.

"If we can do better than that, which I personally think we likely will, then great."

Fauci's assessment offers a glimmer of hope as the country has reported an average of 3,050 Covid-19 deaths a day over the last week. Forecasts predict the nation's death toll will likely top 500,000 within the next month.

It also comes as new case levels, though sky-high compared to most of the pandemic, have been dipping recently.

The US has averaged about 187,590 new cases a day over the last week -- down nearly 25% from the all-time peak average reached just 11 days ago, but still 2.8 times higher than the summer's peak in July, Johns Hopkins University data shows.

The CDC recently warned that new, more contagious virus variants -- like the one first identified in the UK -- could still accelerate the spread of the virus.

Fauci said Friday that a more transmissible variant isn't yet dominant in the United States, and he's "not exactly sure" that it will drive a surge in cases, but it has to be watched carefully.

"The best thing you can do about that is to continue to uniformly adhere to the public health recommendations that we've spoken about time and again -- from the wearing of masks to the washing of hands to avoiding congregate settings," Fauci said. "That's the kind of thing that prevents surges regardless of what the type of virus ... is there."

In Georgia, officials are seeing high numbers of cases, hospitalizations and deaths, and the 120,000 doses allotted per week to the state is not enough to vaccinate seniors and other high-risk residents, Gov. Brian Kemp said.

"We will still have far more demand than we have supply," Kemp said.

The Atlanta metropolitan area "didn't get as much of the vaccine at the beginning of the distribution as I had hoped that we would receive," Lance Bottoms told CNN's Wolf Blitzer. "A lot of it went to other places throughout the state."

Constraints on supply in New York City means there are not enough doses to vaccinate members of the city's police and fire departments, the agencies told CNN on Thursday. There are still enough for those who already have appointments made and those who had already received their first dose, the fire department said.

Lines at Dodger Stadium in Los Angeles on Thursday were filled largely with people over 65 years old, with some waiting for five hours for the vaccine, Mayor Eric Garcetti said.

"There may be a wait ... so use the restroom beforehand, bring water and snacks, and make sure your gas tank is filled up or your car is charged," he said.

Murthy, Biden's pick for surgeon general, said the US needs to do more to speed up the vaccinations.

"We cannot take a year in order to get to the critical levels of vaccination that we need in this country," Murthy told CNN's Wolf Blitzer on Thursday. "We've got to get there sooner."

Even with reports of many people waiting in line, about 6 in 10 Americans don't know when or where to get a coronavirus vaccine, according to a new report from the Kaiser Family Foundation.

Most Americans don't know when or where they can get a vaccine, including older Americans, who are already eligible to get a vaccine in a growing number of states," foundation President and CEO Drew Altman said in a news release Friday. "Understandably large numbers of people are frustrated, angry and confused."

The Biden administration will "try to build ... (a) national clearinghouse" that provides information on where people can get shots, said White House chief of staff Ron Klain on Thursday night.