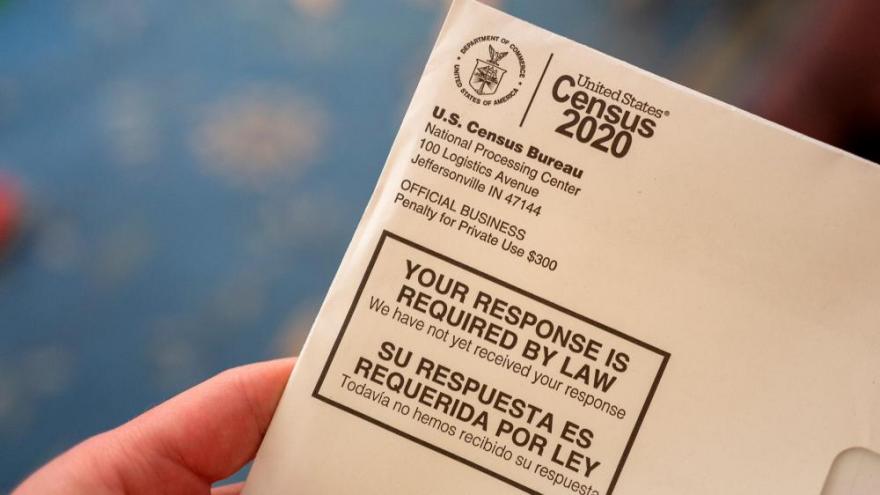 The United States Census Bureau will announce updated state population totals on April 26, numbers that will be used to reapportion seats in the House of Representatives and are expected to shift more political power from states in the Midwest and Northeast to states in the South and West.

(CNN) -- The US Census Bureau announced Monday that the total population of the United States has topped 331 million people, marking the country's second slowest population growth rate in US history. Amid that, Texas will gain two seats in the redistricting process, the results found.

Additionally, Colorado, Florida, Montana, North Carolina and Oregon will each gain one seat in Congress.

California, Illinois, Michigan, New York, Ohio, Pennsylvania and West Virginia will all lose congressional seats ahead of the 2022 midterm elections.

The results -- which show that political power in the country is shifting from states in the Midwest and Northeast to those in the South and West -- will have wide-ranging impacts on numerous aspects of American life, ranging from each state's representation in Congress to the amount of money each state will get from the federal government. The numbers could shift the political makeup of Congress and set up what will likely be contentious redistricting battles in the coming months.

And the numbers reflect which states are growing in both population and power. With Colorado, Florida, North Carolina and Texas all gaining seats -- and thus, electoral votes -- their political clout will grow over the next decade, largely at the expense of states like Pennsylvania, Ohio and Michigan.

The new numbers represented a decrease in the population growth rate when compared to growth between 2000 and 2010. It was only slightly more than the growth rate seen during the 1930s.

Census officials said they were "very confident in the quality of the data" that they collected.

"While no Census is perfect, we are confident that today's 2020 Census results meet our high data quality standards. We would not be releasing them to you otherwise," acting Director Ron Jarmin said.

"2020 brought unprecedented challenges -- a global pandemic, destructive wildfires, the most active hurricane season on record and civil unrest across the country. With all of that happening, the Census Bureau had to quickly adapt its operations to confront these challenges head on," she said Monday.

Some expectations from census experts were off. Some believed that Texas would gain three total seats, not two, while others believed states like Arizona, which did not gain a seat, would add a House district. Experts also expected Minnesota and Rhode Island to lose a seat -- neither did, according to the Census Bureau.

Some of the figures were remarkably close, however. Census Bureau officials said that if they had counted 89 more people in New York during the census and all other state populations had stayed the same, the state of New York would not have lost a district.

More detailed data will also be released in the coming months that states will use to help draw the boundaries of their congressional districts. The agency has said those redistricting counts are expected to be released by the end of September.

Although the Census will publish resident counts for Puerto Rico and the District of Columbia, their totals are not included in the overall apportionment population because they don't have voting seats in the House, the agency said.

The release of the data has been a long time coming, delayed by both the coronavirus pandemic and controversial legal fights on how President Donald Trump's administration has handled the process.

The Census Bureau announced in February that the numbers, which would normally come out by April 1, would be delayed. The bureau cited the coronavirus pandemic, and the difficulty the virus created for those collecting census data, as the reason for the delay.

The process was also complicated by the Trump administration's efforts to exclude noncitizens when seats in Congress were apportioned, a decision that landed the bureau and the Republican administration in lengthy legal fights.

Former attorney general Eric Holder responded to the announcement, saying that with the release of the numbers, "each state now needs to prepare for a fair and transparent redistricting process that includes input from the public."

Holder, the head of the National Democratic Redistricting Committee, a Democratic group aimed at combating gerrymandering, added: "Make no mistake -- the same Republican state legislators who are pushing forward on hundreds of anti-voter bills at the state level have been very clear that they intend to manipulate the redistricting process to lock in their power."

In the majority of states, maps are redrawn and accepted by state legislatures, with many giving authority to the state's governor to either approve or deny the new districts. Only a handful of states rely on relatively independent commissions to determine new maps. Because Republicans have been more successful at winning state legislatures in recent years, the party has almost total control over the process in a number of key states, like Texas and Florida.

If Republicans embark on cutting up increasingly diverse populations in the suburbs around some of the nation's largest cities -- combining them with more reliably Republican voters in exurbs and rural areas -- the party will open themselves up to racial gerrymandering claims. Democrats are prepared to fight any attempts.

"The presumption that Republicans should get all of those new seats simply because they control the process is a presumption of gerrymandering," said Kelly Ward Burton, the president of the National Democratic Redistricting Committee. "And that is illegal."

Another issue facing both parties is how each should analyze the last four years of political shifts under Trump, a time that saw Democrats make up considerable ground in the suburbs and Republicans make inroads with Latino communities in places like South Florida and South Texas and consolidate support among rural voters.

The question for those party officials in charge of the redistricting process will be whether to treat these shifts as either aberrations or signs of more lasting changes.

"For people who did this stuff a decade ago, if they had known that Donald Trump was going to come along in 2016 and shift the American electorate, there's at least a couple dozen seats around the country that would have been drawn differently than they were," said Adam Kincaid, the head of the National Republican Redistricting Trust. "And that is the challenge for the next few years is trying to forecast out how much this realignment is permanent versus temporary."