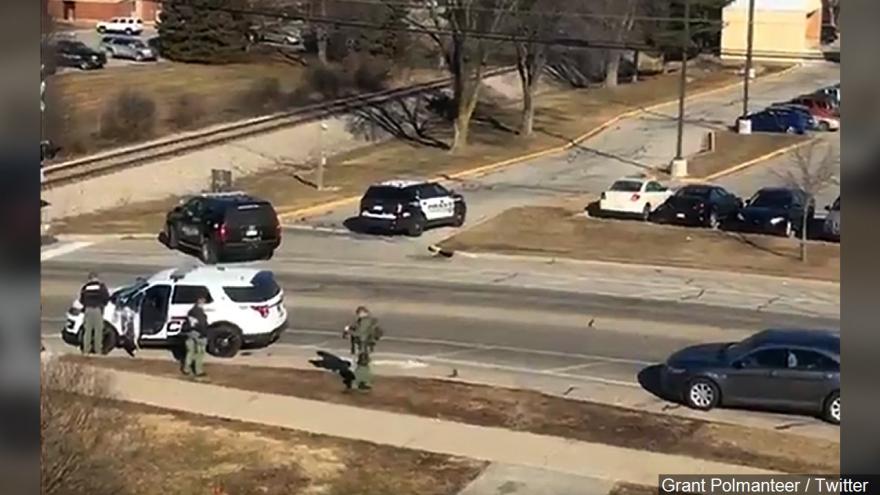 (CNN) -- A Michigan college student accused of killing his parents at a campus residence hall was arrested early Saturday after a nearly daylong manhunt.

"The suspect was seen and reported by an individual on a train passing through the north end of campus shortly after midnight," the university said in a statement.

He was arrested without incident.

"CMU President George E. Ross thanks the campus and surrounding community, and many law enforcement personnel who came together to keep each other safe and apprehend the suspect," the statement said.

The university, in Mount Pleasant, identified the victims as the suspect's parents: James Eric Davis Sr., 48, and Diva Jeenen Davis, 47.

"The family is in shock and trying to piece everything together," a relative told CNN.

"At some point in the evening, he was transported to McLaren Hospital due to what the officers believed may be a drug-related type incident, an overdose or a bad reaction to drugs. At that point he was released to the hospital staff," Klaus said.

As for Friday's shooting, "we're calling it a family-type domestic issue at this point," Klaus said.

The victims were from the Chicago suburb of Bellwood, where James Davis Sr. was a part-time police officer for 20 years and assisted the department on special occasions.

"He was always there when you asked for him to be there," Bellwood Police Chief Jiminez Allen said.

Bellwood Mayor Andre Harvey said he believed the parents were picking up their son before spring break.

James Davis Sr. was a pillar of the community, which has 20,000 residents, and was beloved by friends and neighbors, the mayor said.

Schools in Mount Pleasant went into "secure mode" -- meaning all interior doors were locked, blinds drawn and no one allowed to enter buildings, according to Jennifer Verleger, Mount Pleasant Public Schools superintendent

Agents from the Bureau of Alcohol, Tobacco, Firearms and Explosives also assisted in the investigation, according to an ATF tweet.

CNN's calculation of the number of school shootings include shootings on school property, that involve one of more victims, includes domestic violence incidents, and other factors.