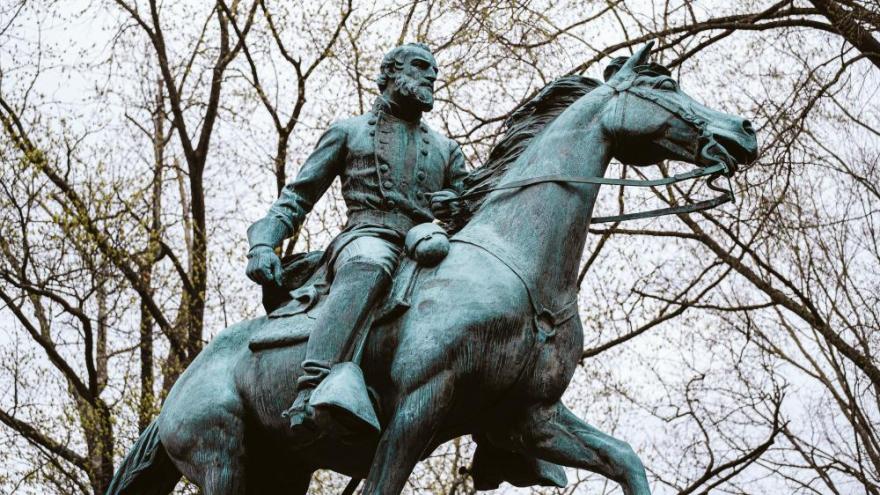 A statue of Confederate General Thomas "Stonewall" Jackson is seen at Justice Park on April 1 in Charlottesville, Virginia. After a five-year court battle, the Virginia Supreme Court rules that Charlottesville Confederate statues can be removed.

(CNN) -- In a unanimous vote late Monday night, the Charlottesville City Council voted to remove two Confederate statues from the city's public parks, almost four years after they served as a flashpoint for the violent "Unite the Right" rally that killed counterprotester Heather Heyer.

The public now has a 30-day period to propose new plans for the statues of Robert E. Lee and Stonewall Jackson after their removal. According to city documents, Charlottesville is requesting proposals "for any museum, historical society, government or military battlefield interested in acquiring the Statues, or either of them, for relocation and placement."

Activists who spoke in the public hearing portion of the meeting said they wanted the statues removed before the four year anniversary of the riot, in part due to concerns that the statues would become a rallying point for white Nationalist protesters.

Brian Wheeler, director of Communications for the City of Charlottesville, told CNN on Tuesday that after several years of intense effort, the city has "taken a major step forward towards telling a more complete history of our community.

"We look forward to transforming our downtown parks by removing these racist symbols of Charlottesville's past," Wheeler said in a statement. "There remains much work to be done in Charlottesville's future as we work towards the goals of racial and economic justice, but this is an important milestone in that journey."

Charlottesville resident and community leader Don Gathers has been involved in the process to remove the statues since before the "Unite the Right" rally and told CNN the vote was "relieving."

"It was the manifestation of many, many years of work by a vast number of extraordinary people in the community. The next step now is the actual removal. The process needs to be smooth, seamless and expeditious," Gathers said, adding that the statues shouldn't be moved be moved to another city. "No other locality should ever have to endure the evilness that they represent. They should be destroyed — melted down. Followed by, a ritualistic cleaning of the area they've dominated for so long."

Jalane Schmidt, a religious studies and director of the Memory Project at the University of Virginia, has also worked to remove the statues and told CNN she was impressed by the number of community members who warned the city council not to simply shuffle the statues to another community where they "would continue to promote Lost Cause ideology."

"This represents a shift in the conversation about monuments from mere demands for removal to concern for what happens to statues after they're removed," Schmidt said Tuesday." Many speakers urged Council to think creatively about how to dispose of the monument, even voicing support for 'transforming' it by melting it down.

Monday night's vote comes after almost four years of unsuccessful attempts to remove the statues. The effort began before the 2017 "Unite the Right" rally, which then brought thousands of White nationalists to Charlottesville, many bearing Confederate and neo-Nazi symbolism, protesting the removal of the statues.

One White supremacist killed counterprotester, Heyer, and injured 19 others when he plowed his car into a crowd. Many more were injured in separate incidents during the weekend rally.

"I want to emphasize that this is not the end of the work to dismantle the very systems and structures that these statues represent, in fact, this is only the beginning - the removal of these statues is low-hanging fruit," Bryant, now a student at the University of Virginia, said Tuesday. "However, I want to be clear that there can be no unity and healing without reckoning with our full and complete history, one that includes the voices of those who have been traditionally silenced, marginalized, and erased; and a true commitment to racial equity through the redistribution of resources."

In October 2017, two months after the riot, a circuit court ruled against removing the statues from public spaces, saying that they were protected by a state statute that barred the removal of "memorials and monuments to past wars," court documents show.

In April, the Supreme Court of Virginia overturned that decision, ruling that the Lee and Stonewall monuments "were erected long before there was a statute which both authorized a city's erection of a war memorial or monument and regulated the disturbance of or interference with that war memorial or monument," according to Justice S. Bernard Goodwyn's opinion.

Cities across Virginia have removed Confederate monuments, including, Charlottesville has brought down a statue of a Confederate soldier from the county courthouse in September 2020.