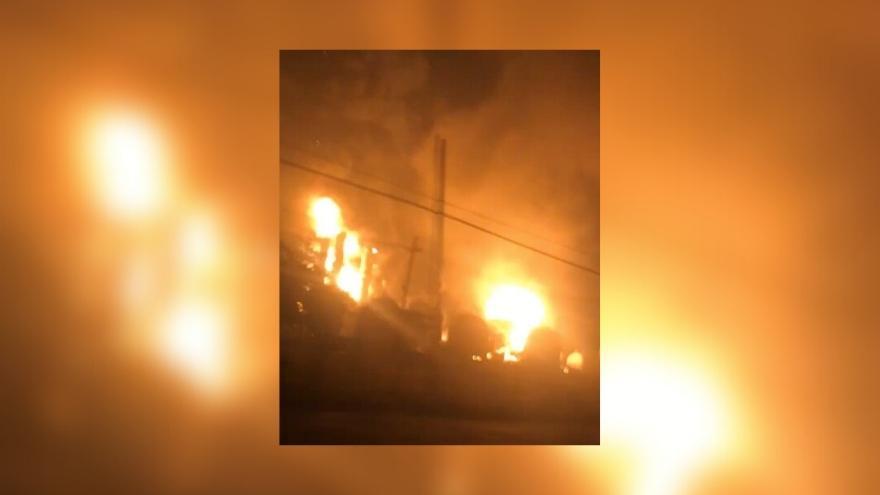 A chemical fire continues to burn at the site, and a mandatory evacuation order has been issued within a half mile of the TPC Group plant, about 90 miles east of Houston, the Nederland Volunteer Fire Department said. Source: Trent Ryan Lee/Twitter
By Faith Karimi and Joe Sutton, CNN

A chemical fire continues to burn at the site, and a mandatory evacuation order has been issued within a half mile of the TPC Group plant, about 90 miles east of Houston, the Nederland Volunteer Fire Department said.

"There's extensive damage throughout the City," Port Neches Police Department said in a statement. "Please stay off the roads anywhere near the refineries. Obey all the barricades that are in place. We are doing everything we can to keep everyone safe and informed."

Personnel have been evacuated from the plant, which makes products for chemical and petroleum companies, said TPC Group, which runs the Port Neches Operations site. About 13,000 people live in Port Neches, and some said their home windows were blown out by the blast.

The fire is burning a chemical called butadiene, police said. A colorless gas, butadiene is considered a health hazard, according to the US National Library of Medicine. It is made from processing petroleum and is used to make synthetic rubber and plastics.

"Our focus is on protecting the safety of responders and the public, and minimizing any impact to the environment," TPC Group said.

The injured employees are undergoing treatment, the company said.

'Then I noticed an orange glow'

Tyler Shawn Dunlap was sleeping when the explosion rocked his house.

"I heard and felt my house shake. I first thought people were coming to break in 'cause of our intense security," he told CNN. "I went to Dad's room, and he thought our generator blew up, so we checked that, then I noticed an orange glow from the clouds."

Trent Lee said the explosion sounded like a nuke and shook everything in Port Neches. The blast was also captured on Mia Hubert's doorbell camera and left the area covered in a fiery orange hue.

An unrelated fire was quickly extinguished early Wednesday at the Lanxess chemical facility in Charleston, South Carolina. The company has six production plants at the site and manufactures phosphorus chloride and flame-retardant additives.