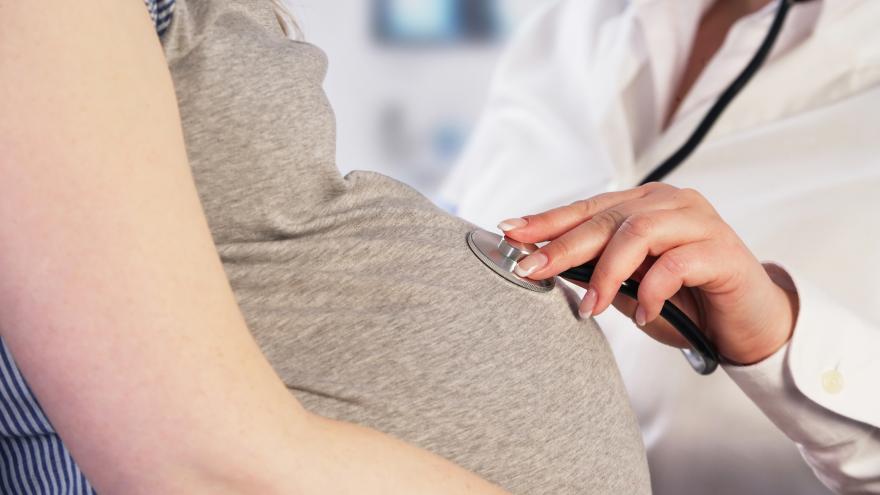 Phthalates, human-made chemicals in the plastics we use, are negatively impacting brain development in kids, according to a group of volunteer scientists, health professionals and child advocates. - Shutterstock

(CNN) -- Synthetic chemicals called phthalates are damaging children's brain development and therefore must be immediately banned from consumer products, according to a group of scientists and health professionals from Project TENDR.

Project TENDR, which stands for Targeting Environmental Neuro-Development Risks, is a group of volunteer scientists, health professionals and child advocates working to study and reduce children's exposure to neurotoxic chemicals and pollutants.

"What we want to accomplish is to move the public health community, including regulators, toward this goal of elimination of phthalates," said lead author Stephanie Engel.

"We have enough evidence right now to be concerned about the impact of these chemicals on a child's risk of attention, learning and behavioral disorders," said Engel, a professor of epidemiology at the University of North Carolina at Chapel Hill Gillings School of Global Public Health.

"I hope that this paper will act as a wake-up call to understand that early life exposure to this class of chemicals is affecting our children," said toxicologist Linda Birnbaum, former director of the National Institute for Environmental Health Sciences, as well as the National Toxicology Program. She was not involved in the paper.

"When you have the same kind of findings repeated in multiple populations, done by different investigators using different tools and approaches and you keep coming up with the same finding, I think you can begin to say that the data is pretty clear," Birnbaum said.

CNN reached out for comment from the trade association American Chemistry Council.

"While we are encouraged by continuous research efforts into the science and health of phthalates, we are concerned about the over interpretation of studies that have not established a causal link between phthalates and human adverse health effects," said Eileen Conneely, senior director of the chemical products and technology division of ACC.

Called "everywhere chemicals" because they are so common, phthalates are added to consumer products to make the plastic more flexible and harder to break.

Phthalates must be listed among the ingredients on product labels, unless they are added as a part of the scent. Under current US Food and Drug Administration regulations, phthalates can be simply labeled "fragrance," even though they could be as much as 20% of the product, studies say.

Phthalates are also in PVC plumbing and building products and items such as medical tubing, garden hoses, and some children's toys. Globally, approximately 8.4 million metric tonnes of phlathates and other plasticizers are consumed annually, according to European Plasticizers, an industry trade association.

The new call to action, published Thursday in the American Journal of Public Health, focuses specifically on the link between phthalate exposure and long-lasting neurodevelopmental harm in fetuses, infants and children.

By 2019, more than 30 studies had examined prenatal exposure to different types of phthalates, and long-term studies had been done in 11 different countries or territories around the globe, the report said. Not all of the papers had found consistent results, especially in the area of cognitive development, but the report's authors said that might be due to difference in study designs and children's ages.

The report said the strongest associations have been found with hyperactivity, aggression, defiance, emotional reactivity, delinquent behaviors and other signs of attention deficit hyperactivity disorder, or ADHD, after exposure to phthalates.

One study, for example, found children of mothers with the highest levels of phthalates in their urine during their second trimester had almost three times the odds of being diagnosed with ADHD as children with mothers who had much lower levels.

A link between phthalate exposure and poorer working memory and intelligence has also been found. One study discovered children who were exposed to higher levels of phthalates in utero had an IQ level that was seven points lower than children with less exposure. The highest-risk kids also had reduced perceptual reasoning and verbal comprehension.

Conneely of the ACC, however, pointed to recent systematic reviews that pulled together available data on neurobehavioral and cognition effects and "concluded that there was no association between DINP and DIDP and neurobehavioral or cognitive effects."

In addition, Conneely said, "data from the US Centers for Disease Control and Prevention clearly show exposure levels to phthalates are well below the levels determined by US Environmental Protection Agency (EPA) and other regulatory bodies to be safe."

It's true that "federal regulation of phthalates in the United States has been minimal with several exceptions, including restrictions on 8 phthalates in children's toys and childcare articles," the study said.

However, the study continued, "we strongly urge both federal and state agencies to move rapidly to eliminate phthalate use," adding that "states should not wait for the federal government to act, as state action can galvanize federal regulation."

In response to CNN's request, an EPA spokesperson provided the following comment.

"As the Biden-Harris Administration works to advance EPA's mission of protecting human health and the environment, the agency is committed to ensuring the safety of chemicals used by all Americans.

"The agency is actively working to ensure all (Toxic Substances Control Act) chemical risk evaluations, including the ongoing evaluations for seven phthalates, follow the science and the law and that any resulting risk management actions protect human health, particularly the health of more vulnerable groups like children and workers, and the environment."

Unlike toxic metals such as lead, arsenic, cadmium and mercury, phthalates are more rapidly metabolized and typically leave the body once exposure is removed.

"They have much shorter biological half lives than, say, the heavy metals, which can hang around for decades," said David Bellinger, a professor of neurology and psychology at Boston Children's Hospital and a member of Project TENDR who was not involved in the new paper.

The problem, Bellinger added, is that once the baby's developing brain is impacted by the chemical in utero, the damage has been done.

"The brain might be exposed at just the wrong time," Bellinger said. "That's the concern."

Critics argue that studies showing distinct neurodevelopmental harm have only been done in animals, while studies on young children focus on behavioral impacts, such as increases in behavioral disorders and attention and learning deficits.

"There will never be gold-standard randomized clinical trials," said Birnbaum, because science would never deliberately expose a child to such chemicals. That's the whole issue with environmental exposures."

Elimination is the goal

The paper called for the elimination of the entire class of phthalates from products that lead to the exposure of pregnant women, women of reproductive age, infants and children.

Another reason that the entire class of phthalates should be regulated, BIrnbaum said, is to keep manufacturers from replacing one "bad actor" with another phthalate that hasn't been as thoroughly studied.

"This is the whole history of these chemicals," Birnbaum said, "whether you call it 'whack a mole' or 'chemical conveyor belt' or 'unfortunate substitution.' We move from one chemical that we have concerns about to another one which we just haven't studied yet, which often turns out to be just as problematic.

"We can't continue to test these things one at a time," Birnbaum continued. "I could make an argument that if one chemical can be substituted for another without changing the process, then why would you think the biology would be different?"

Critics point to the expense of removing an entire class of chemicals from the marketplace.

"Cost is always the counter argument to change," Engel told CNN. "But the current system has costs, too. It's just that we've become accustomed to paying them. Right now families, health care, school systems are shouldering the costs of a lack of health protective regulation for children."

Engel also argues that elimination of the entire class of chemicals is possible "because manufacturers are already showing us that it's feasible," and points to a number of actions already taken by the marketplace. Apple, the paper said, has removed "phthalates as a class from almost all products," while other companies like CVS and The Home Depot have reduced the use of phthalates in beauty, personal care products, household products and vinyl flooring.

And of course, the public can play a significant role in accomplishing change. Boston Children's Bellinger pointed to the success of angry moms who demanded that companies remove the hormone disruptor Bisphenol A, commonly known as BPA, from baby bottles and sippy cups.

In reaction to the public uproar, six of the major baby bottle manufacturers announced the removal of BPA from their products in March 2009, three years before the FDA banned the chemical from those products at the request of the American Chemistry Council, an industry trade group.

"If people just vote with their wallets, and let these companies know that they care, that's probably an effective a way to shake this thing loose," Bellinger said.

This isn't the first group to call upon the FDA to consider an entire class of chemicals and their overall impact.

A petition submitted last year by the Environmental Defense Fund and other advocates called upon the FDA to consider the "cumulative effects" of the more than 10,000 chemicals allowed to be added to foods and food packaging. Some of those, like phthalates and another class of chemicals called PFAS (perfluoroalkyl and polyfluoroalkyl substances), are known hormone disruptors linked to developmental, cognitive and other health problems in babies and adults.

CNN reached out for comment from the FDA on the new study. The agency said it was aware of the study publication and was reviewing the findings.

The FDA spokesperson added that "currently, the FDA is reviewing two food additive petitions proposing the agency amend our food additive regulations by removing authorizations for the use of ortho-phthalates in food-contact applications. Completing our review of these petitions and publishing our response in the Federal Register is a priority for the FDA."

The movement toward elimination is heading mainstream, as more and more medical associations begin to question the lasting impacts of plastic additives. Last year's petition, for example, is supported by 11 groups including the American Academy of Pediatrics, the American Public Health Association, and the Center for Food Safety.

Not only is it time that regulators take definitive action to address these ubiquitous chemicals in our environment, Birnhaum said, consumers also should be voting with their pocketbooks.

"We need to step back and ask the question, 'What do we really need when we know there is a downside?' Do we really need every tablecloth or new carpet to be totally stain repellent?'" she said.

"Or maybe when we go out to dinner we carry a glass container in our pocketbook as a doggie bag, instead of coming home with a Styrofoam or coated paper container," Birnhaum continued.

"We have to say, 'What's the purpose, what's the function that we're looking to do?' And let's find a way to do it safely, from the beginning."