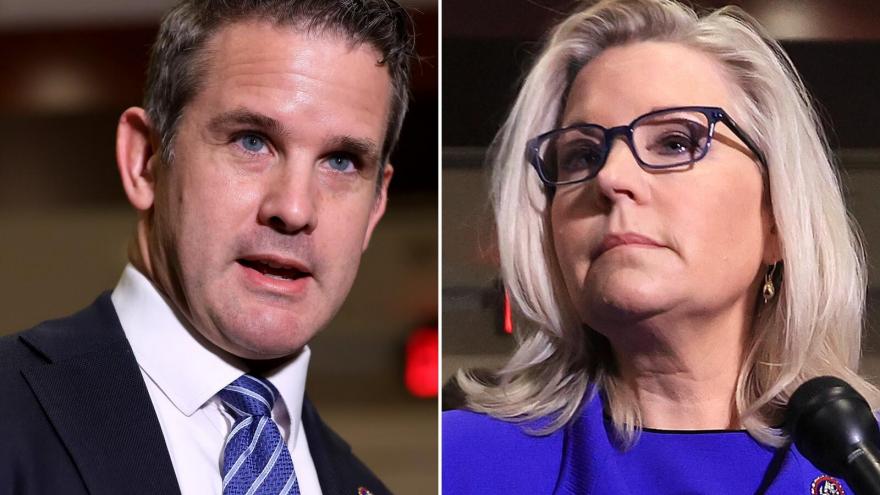 Republican Reps. Liz Cheney and Adam Kinzinger broke ranks on Wednesday to join all Democrats in voting for a resolution that both censured Republican Rep. Paul Gosar of Arizona and stripped him of his two committee assignments.

(CNN) -- Republican Reps. Liz Cheney and Adam Kinzinger broke ranks on Wednesday to join all Democrats in voting for a resolution that both censured Republican Rep. Paul Gosar of Arizona and stripped him of his two committee assignments.

The vote came after Gosar posted of a photoshopped anime video to his Twitter and Instagram accounts showing him appearing to kill Democratic Rep. Alexandria Ocasio-Cortez of New York and attacking President Joe Biden. Gosar later took down the video after facing criticism but did not apologize.

The action led by House Democrats represents a major rebuke to the Arizona Republican while underscoring the rift between Cheney of Wyoming and Kinzinger of Illinois and their GOP colleagues. The pair serves on the House select committee investigating the January 6 attack on the US Capitol, and both lawmakers voted to impeach former President Donald Trump for "incitement of insurrection" following the attack.

"The glorification of the suggestion of the killing of a colleague is completely unacceptable. And I think that it's a clear violation of House rules. I think it's a sad day," Cheney told reporters while walking off the House floor Wednesday. "But I think that it's really important for us to be very clear that violence has no place in our political discourse."

Kinzinger, meanwhile, had previewed his support for the resolution in a tweet Tuesday evening. "We have to hold Members accountable who incite or glorify violence, who spread and perpetuate dangerous conspiracies. The failure to do so will take us one step closer to this fantasized violence becoming real," he said.

GOP Rep. David Joyce of Ohio told CNN that he voted "present" on the resolution -- meaning he did not vote "yes" or "no" -- because the House Ethics Committee, which he serves on, is meeting to discuss the video that Gosar posted.

Republican Reps. Barry Loudermilk of Georgia, Scott Perry of Pennsylvania, and Morgan Griffith of Virginia did not vote.

Ahead of the action Wednesday, Gosar refused to answer any questions about his tweet of the violent video, walking in silence. He wouldn't say if he regretted it or explain the claim he made internally that he didn't see the violent episode in the video before he tweeted it out.