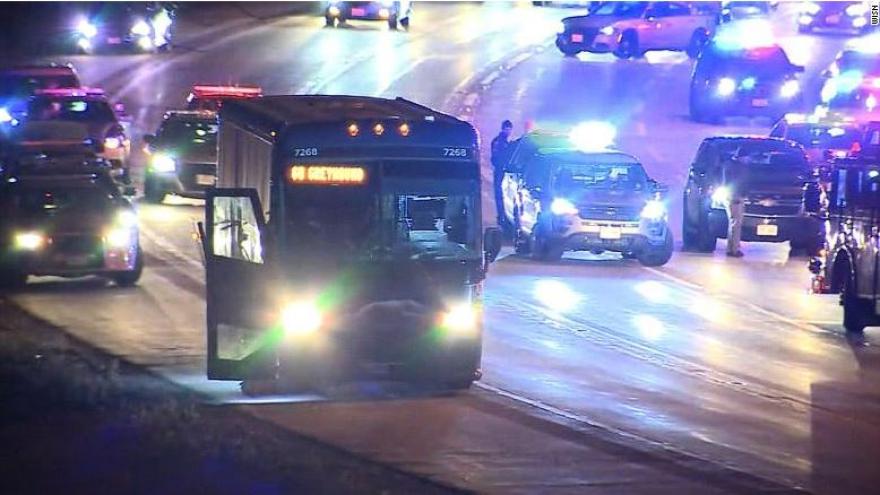 Law officers chased down the bus and arrested the man without incident near the Wisconsin-Illinois border Friday night after a passenger called 911 to report a gunman on board, according to Racine County, Wisconsin, Sheriff Christopher Schmaling.

The man allegedly implied that he had a weapon but none has been found, Schmaling said. The bus was being searched Saturday.

The suspect, identified as Margarito Vargas-Rojas of Chicago, was charged with making terroristic threats, a felony, and disorderly conduct, Schmaling said.

Vargas-Rojas, who works in Milwaukee, allegedly threatened to kill officers transporting him to jail as well as investigators who interviewed him, Schmaling said. The suspect is undocumented and had been previously deported, the sheriff said. Vargas-Rojas' status and whether he has an attorney could not be determined Saturday.

A passenger called 911 from the bus to report a male claiming to have a gun and making threats to kill people Friday night as the bus headed to Chicago, the Racine County, Sheriff's Office said. Fifty people were on the bus, Greyhound said in a statement.

The threats were apparently made after an altercation with two passengers on the bus, according to Schmaling.

"He was acting crazy," passenger Patrick Dodd said of the suspect, according to CNN affiliate WLS. "That's what it boils down to. We tried to get him to calm down, there were four or five people telling him to sit back down, but he refused to, and that's when I was on the phone with 911 begging for help."

Dozens of patrol cars followed the bus Friday night as other officers shut down traffic on Interstate 94. Authorities safely evacuated all the passengers; no injuries were reported, officials said.