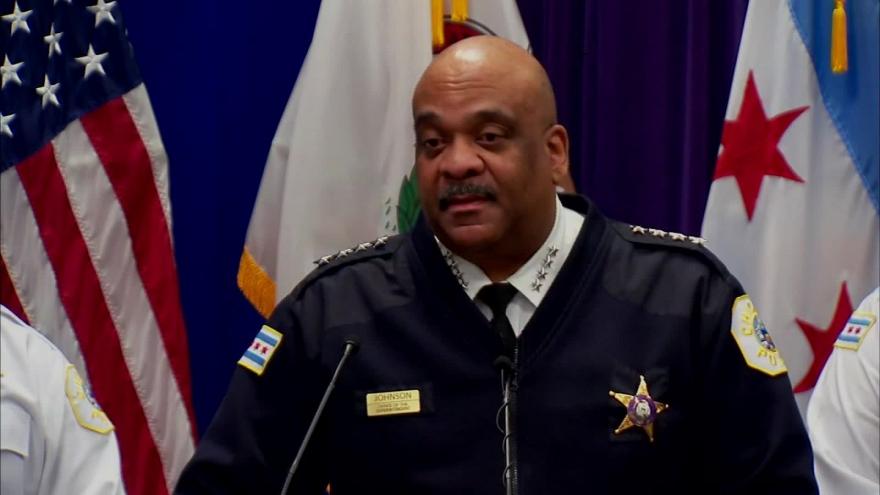 (CNN) -- Chicago Mayor Lori Lightfoot fired retiring Police Superintendent Eddie Johnson Monday, saying Johnson lied about an October incident in which he was found sleeping in his car after supposedly having drinks with dinner.

"It has become clear that Mr. Johnson engaged in a series of actions that are intolerable for any leader in a position of trust, particularly the head of the Chicago Police Department," she said in a news conference. "Mr. Johnson failed the hardworking members of the Chicago Police Department, he intentionally misled the people of Chicago and he intentionally misled me. None of that is acceptable."

Lightfoot met with Johnson on Monday to deliver the news, and he was "accepting," she said.

Johnson's actions on the night of October 16 and morning of October 17 demonstrated "a series of ethical lapses and flawed decision making," she said, adding that he then went on to promptly hold a news conference after the incident in which he was dishonest with the public.

"He was not caught off guard and he had plenty of time to choose his words, and the choice he made was a communicated narrative replete with false statements all seemingly intended to hide the true nature of his conduct the evening before," the mayor said.

Even when Lightfoot challenged his story, she said, he maintained that he was telling the truth.

"I now know definitively that he was not," she said. "Had I known these facts at the time, I would've relieved him of his duties as superintendent then and there. I certainly would not have participated in a celebratory press conference to announce his retirement."

The city's police union released a statement saying it understood Lightfoot's decision and appreciated her desire for transparency and accountability within the department, but it cautioned against a rush to judgment.

"It's important to understand that just this weekend, the department stripped an officer who was the victim of a high-risk battery without any investigation and without even taking a statement from the officer," said Martin Preib, second vice president of the Chicago Fraternal Order of Police.

"It is also important to hold every facet of the city affecting the police department accountable, including (the Civilian Office of Police Accountability), the Chicago Police Board, and Inspector General. We look forward to assisting the mayor in helping to make all these institutions equally accountable."

Set to resign at month's end

Last month, Johnson said he was stepping down after 30 years with the department. He would continue in his role until year's end, Lightfoot said. Both declined at the time to comment on the inspector general's investigation into Johnson.

"It's time for someone else to pin these four stars on their shoulders," Johnson announced November 7, holding back tears. "These stars can sometimes feel like you're carrying the weight of the world, but I'm confident that I leave CPD in a better place than when I became superintendent."

Though Lightfoot declined to say Monday what specifically led her to oust the police chief, she said it was imperative he be fired. Allowing him to retire might have been the way of Chicago's old guard — an institution she campaigned on upending — but it would've been inconsistent with the type of leadership she vowed to bring to the city, she said.

"This moment needs to be a turning point," she said. "Yesterday, today and tomorrow has to be about culture change. That must start at the top. That hard but important work is impossible without strong leadership focused on integrity, honesty, legitimacy and accountability."

"The old Chicago way must give way to the new reality," she said.

Lightfoot did, however, mention a video that influenced her decision.

"I saw things that were inconsistent with what Mr. Johnson had told me personally," she told reporters. "A lie's a lie. He told me something that happened that night."

A passerby called 911 on October 17 to report Johnson was sleeping in his car at a stop sign. He drove himself home after officers responded and determined he was not impaired.

The city's top cop told reporters he felt like his blood pressure was rising when he decided to park his car. He'd been prescribed a medication after he suffered a blood clot in the summer, he said, and he thought he fell ill because a doctor had changed his medication and he had accidentally missed a dose.

He was not asked to take a sobriety test. An internal investigation was launched at Johnson's request. Despite Lightfoot telling the Chicago Sun-Times that Johnson told her he had had "a couple drinks with dinner," there was no immediate evidence of wrongdoing, a Chicago police statement said at the time.

"While we have no indication of impropriety at this time, this question can only be answered by the internal affairs investigation," it said.

Citing Johnson's handling of the Laquan McDonald shooting and other incidents they said fractured Chicagoans' trust in their police department, many candidates vying to replace Rahm Emanuel as mayor called for Johnson's badge during their campaigns. Lightfoot promised a more patient approach.

"We have a lot of challenges to face, and (Johnson's) very well aware of it," she said after winning the election in April. "We're going to be heading soon into the summer violence season. After that's over, we'll evaluate at that point, but I'm going to be working closely with the superintendent and with his executive team to make sure that we keep our neighborhoods safe."

Though she provided no guarantees Johnson would remain superintendent come autumn, she said she had a long-term goal of restoring Chicago communities' trust in their police.

"We've got to support and give better training to our police officers to help them understand how to bridge that divide," Lightfoot said. "We'll certainly be borrowing from other cities like New York, but I feel confident that we're going to be able to continue to make progress. Really, our children's lives depend upon it."