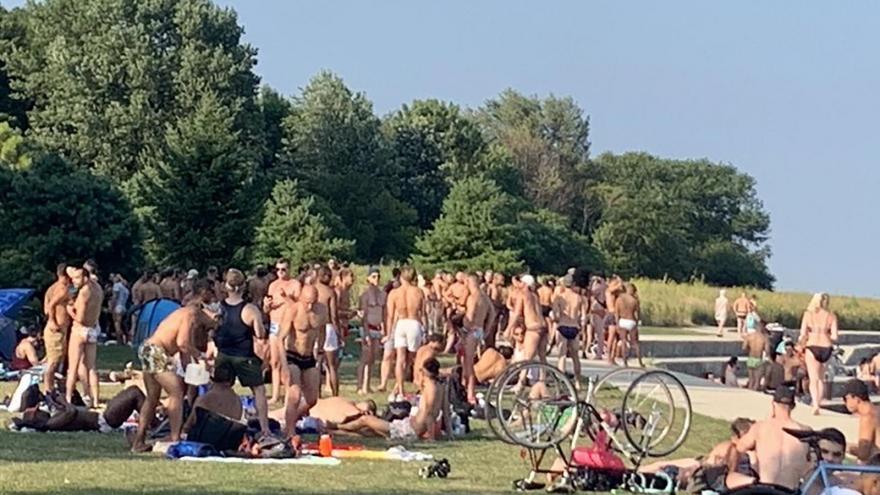 In a photo posted to Twitter by Chicago Mayor Lori Lightfoot, a crowd of people is seen gathering at Montrose Beach Saturday.

"It's called a pandemic, people. This reckless behavior on Montrose Beach is what will cause us to shut down the parks and lakefront," the mayor posted on Twitter Saturday. "Don't make us take steps backwards."

In the photo accompanying her post, dozens can be seen crowding in their bathing suits on the grass, ditching both face masks and social distancing guidelines. Health officials and experts all across the US have urged that, until a vaccine has been safely developed, social distancing and face coverings are the country's most powerful tools in the fight against coronavirus. But in recent months, local and state leaders have grappled with convincing Americans to abide by those guidelines.

"In case you were wondering, I stopped by to see for myself," the mayor added. "It's being addressed."

Hours after Lightfoot made an appearance on the scene, fencing went up where people had previously gathered, Michele Lemons, a Park District spokeswoman told the Chicago Tribune.

Mick Montesi told CNN affiliate WBBM he saw the mayor come out to the area with a cameraman and take pictures of the crowds.

He said the scene the mayor captured was what had been taking place over the past two months.

"In person and in the flesh, it's not as bad as that photo suggests," Montesi told the affiliate.

"I understand where her frustration is and concern is coming from," Justin Schneider, who also talked to the news station, said. "Where are people expected to go to when the beaches are closed it's 95 degrees out?"

Mayor and governor have responded to increased cases

A news release from the mayor's office on July 20 said the city was back in "a high-incidence state" and several restrictions were reinstated in response to a rise in cases, including reducing party sizes in bars and restaurants.

The rise in cases was driven in part by people between the ages of 18 and 29 who were gathering in social settings including bars, restaurants, parks and the lakefront, the news release said.

"If we're going to win against the greatest public health challenge we've ever faced, none of us can afford to sit on the sidelines and warm the benches," Lightfoot said in a separate statement that week urging young residents to wear face masks and heed guidelines. "We cannot afford to let our guard down -- it's time to team up with your masks up."

"Imagine if someone could walk into a restaurant, light a cigarette, blow smoke in your face, and all the smoker had to say is, 'well it's my choice,'" the governor said in his statement.

"We are seeing cases increasing each day and hearing about people not complying with the masking mandate. This rule is an effort to help keep all of us healthy and decrease the risk of contracting COVID-19," Dr. Ngozi Ezike, the director of the Illinois Department of Public Health said in a statement.