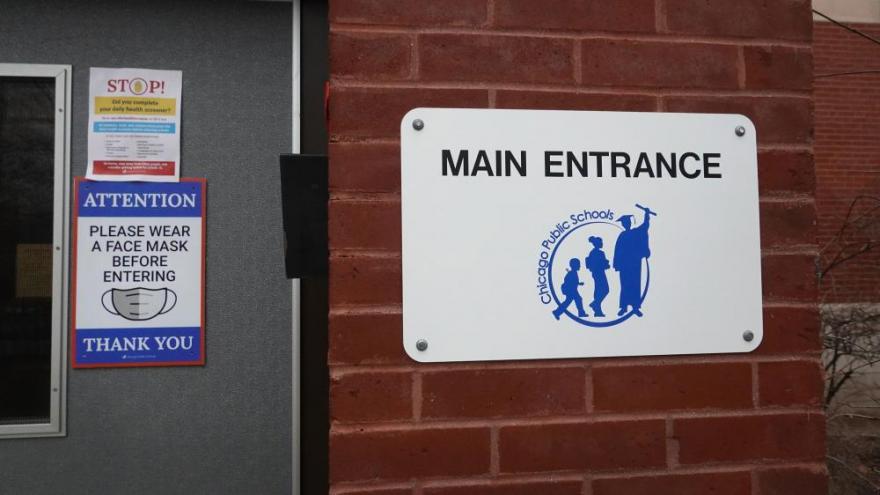 A sign outside of Columbus Elementary School encourages the use of face masks in Chicago, Illinois.

(CNN) -- Members of the Chicago Teachers Union have voted to return to in-person learning, according to a news release from the union.

The CTU backed the tentative agreement after weeks of tense negotiations with Chicago Public Schools system.

"This plan is not what any of us deserve. Not us. Not our students. Not their families. The fact that CPS could not delay reopening a few short weeks to ramp up vaccinations and preparations in schools is a disgrace," the union said in the news release. "We will protect ourselves by using the school Safety Committees created under this agreement to organize and see that CPS meets safety standards and mitigation protocols."

While both sides agreed that they wanted to be back in the classroom with students, the teachers union worried that it was not yet safe in light of the Covid-19 pandemic.

According to the union's news release, 13,681 members voted yes and 6,585 voted no to the proposed framework for in-person learning.

The framework is now a ratified agreement between Chicago Public Schools and the teachers, the CTU statement said.

"This agreement was about making sure everyone in our school communities just aren't safe, but also that they feel safe," Lightfoot said. "And feel that their lived experiences and fears and frustrations have been heard."

In addition to traditional Covid-19 mitigation strategies, Jackson said staff who live in medically vulnerable homes will be offered Covid-19 vaccinations beginning this week. Moving forward, CPS will aim to vaccinate 1,500 CPS employees each week at its own vaccination sites.

As many officials push for a return to in-person learning after nearly a year away from the classroom, 26 states and Washington, DC are allowing some or all of their teachers and school staff to receive coronavirus vaccines.

Although the US Centers for Disease Control and Prevention director Dr. Rochelle Walensky said schools can return to in-person learning before teachers are fully vaccinated, inoculation would be an important safety measure, said Randi Weingarten, the president of the American Federation of Teachers.

"How do we make sure that everybody is safe?" the AFT president said to CNN's Kate Bolduan. "What the vaccines do, it's a layer of protection so that essential workers, when you have huge community spread, are protected outside in their communities as well as doing their work."

Some districts, including Atlanta Public Schools and Hartford Public Schools in Connecticut, have been considering expanding their academic calendar or requiring several weeks of summer school to make up for the lost learning.

"I support a very aggressive summer school program. There is no one that I've talked to who says mandatory summer school. They know that it needs to be a voluntary, super-charged program," Weingarten said. "Our kids have been so deprived for so long, it can't simply be remediation."