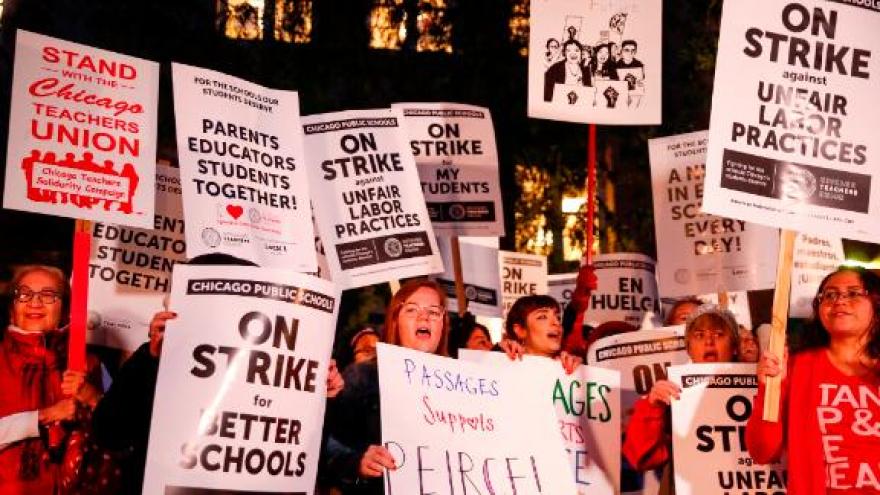 "With 80% of schools reporting, members have voted 81% yes to ratify the new contract with CPS (Chicago Public Schools)," the statement says.

Some of the gains of the new contract highlighted in the statement "include, mandatory class size caps and enforcement, language forcing CPS to comply with special education laws and regulations, sanctuary school protections for immigrant and refugee students, and support for thousands of homeless students."

"While today most schools have a nurse barely one day a week, the contract will provide schools with a nurse and a social worker in every school every day," the statement says.

Chicago Teachers Union President Jesse Sharkey called the contract, "a powerful advance for our city and our movement for real equity and educational justice for our school communities and the children we serve."

The agreement between the Chicago Teachers Union and Chicago Public Schools was negotiated after teachers went on an 11-day strike in October.

Some 300,000 Chicago students returned to their schools on November 1 after the teachers' strike ended with a deal that will make "students' lives better," Sharkey said at the time.

The agreement reached between Chicago Public Schools and the Chicago Teachers Union included millions of dollars to reduce class sizes and bring more nurses, librarians and social workers to campuses.

"We're proud of what we accomplished," Sharkey said. "We moved the needle on educational justice" in Chicago, Sharkey added, noting that the deal is the first time that school nurses and social workers have been included in the teachers' contract with the city.

Sharkey said some of the improvements will be noticeable to teachers and students right away, while others will take effect over time, including the protections related to class size.