Chicago to sue Jussie Smollett for costs of investigation 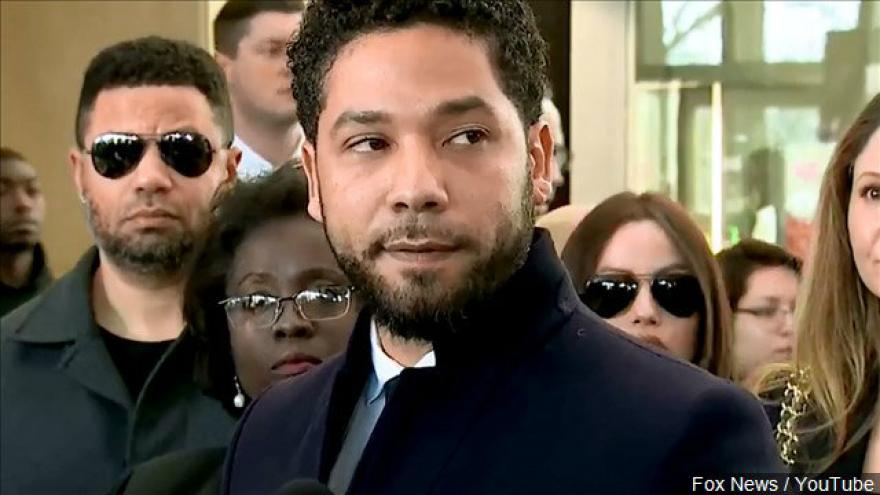 Jussie Smollett has refused to pay more than $130,000 to reimburse Chicago investigative costs, so the city said Thursday it will sue the \"Empire\" actor for the money spent. Photo courtesy Fox News / YouTube / MGN

CHICAGO (AP) — Jussie Smollett has refused to pay more than $130,000 to reimburse Chicago investigative costs and the city said Thursday it will sue the "Empire" actor for money spent investigating what officials say was a phony racist, anti-gay attack that Smollett staged.

Mayor Rahm Emanuel's law chief sent Smollett a March 28 letter demanding he pay $130,106 — plus 15 cents — for overtime worked by detectives and officers in looking into his claims. It set Thursday as the deadline to pay.

The City Law Department said in a Thursday evening statement that it was already drafting a lawsuit in response and would file it "in the near future."

Smollett, who is black and gay, maintains he told the truth in reporting that two masked men assaulted him in downtown Chicago on Jan. 29, shouting slurs and wrapping a rope around his neck. He said his attackers also yelled, "This is MAGA country," a reference to President Donald Trump's campaign slogan, "Make America Great Again."

The lawsuit could lead to a civil trial, where jurors would have to answer the question of whether Smollett orchestrated the attack.

There will be no criminal trial on that question after Cook County prosecutors last week dropped all 16 felony counts against Smollett, saying they believed they could prove the charges but that it wasn't worth the time and expense. The surprise decision angered Emanuel, who called it a "whitewash" and said the city's reputation "was dragged through the mud" by Smollett.

"As part of this legal action, the Law Department will pursue the full measure of damages allowed under the ordinance," the statement from Chicago said. It didn't specify what those damages could be.

The municipal code stipulates that the city can triple the amount originally demanded if someone fails to pay an initial amount. That means the city could demand more than $390,000 from Smollett. If a civil case is decided in the city's favor and Smollett still refuses to pay, his bank accounts could be frozen and his wages garnished.

A spokeswoman for Smollett's legal team declined comment on the latest development.

When the city raised the issue last week of Smollett reimbursing Chicago, the actor's lawyers said it was city officials "who owe" Smollett "an apology — for dragging an innocent man's character through the mud." They added: "Jussie has paid enough."

Smollett admitted no wrongdoing, but he did agree to do some community service before charges were dropped. He also agreed to forfeit $10,000 he paid in bond money after he was charged, which some legal experts say city lawyers could try to use against him in the civil case as an implied admission of guilt.

Taking the matter to trial, carries risks for Smollett, including by extending negative publicity and potentially making it harder for him to get his entertainment career back on track.

Much of the evidence that would have been presented at a criminal trial would be brought out at any civil trial. Smollett could also be required to sit for depositions, forcing him for the first time to explain evidence that prosecutors said demonstrated he was lying.

To the city's advantage, the threshold for proving he staged the incident will be lower than in criminal court. The city won't have to prove beyond a reasonable doubt that Smollett staged the attack in civil court, only that it's more likely true than not true that he did.

Among the risks for the city is that the civil litigation could end up costing far more in legal bills than it could ever hope to get from Smollett. In any lawsuit, there's always the possibility that a judge throws it out before it ever gets to trial.

Mayor-elect Lori Lightfoot, who will be sworn in as Chicago's mayor on May 20, could reverse any legal action Emanuel's law office takes against Smollett in coming weeks. Lightfoot will be Chicago's first black female mayor.

Lightfoot, a former federal prosecutor, said during a pre-election debate that "the public has to have answers as to why these charges were dismissed." But she hasn't detailed any action she might take as mayor regarding Smollett.

The Smollett case and the city's effort to make him pay are both highly unusual, according to several legal experts.

One with some similarities is the case of a University of Iowa physician, Gary Hunninghake, who reported that he was attacked and stabbed while jogging in Chicago in 2010. After contradictions in his account, he eventually conceded he'd stabbed himself. A year later, he was ordered to pay more than $15,000 to reimburse the city for costs of the investigation.