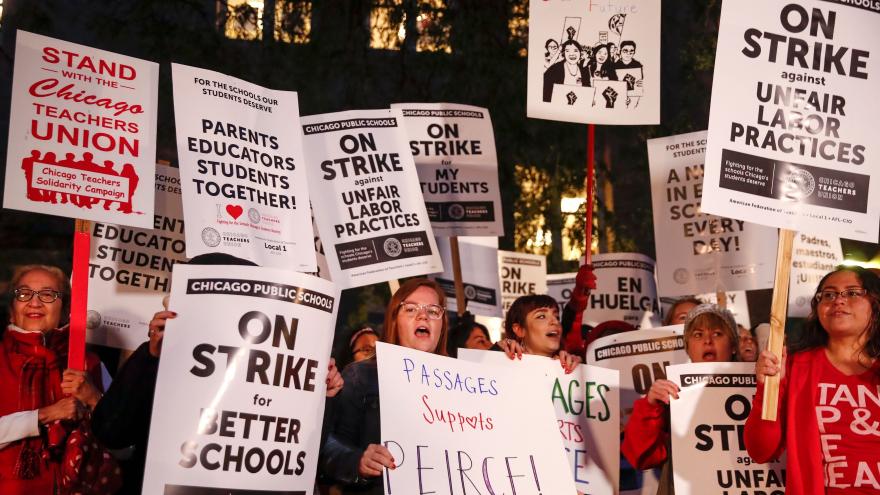 (CNN) -- Chicago public schools students will miss classes for a fourth day on Tuesday as a teachers' strike drags on.

A Democratic presidential candidate will add her voice in support of the teachers. Massachusetts Sen. Elizabeth Warren is set to join Randi Weingarten, president of the American Federation of Teachers union, and educators on the picket lines on Tuesday, the union said. Bargaining resumes Tuesday, the Chicago Teachers Union said.

"The mayor has dashed our hopes for a quick settlement," Sharkey, said citing a letter Lightfoot sent to the union urging them to end the strike as negotiations continue.

"We are not going back to work without a legally binding agreement," Sharkey said.

Lightfoot wrote in the letter, which was shared on the union's Twitter account, "The students and families of Chicago cannot afford to be out of school for any longer, which is why we are asking you to end the strike and encourage your members to return to work while bargaining continues."

On Sunday, Lightfoot posted on Twitter: "These negotiations must move more swiftly so that we can get students back into school as fast as possible."

"Our team has been turning around thoughtful counteroffers at a rapid pace. We are hopeful that CTU will meet that pace ... so we can bring this process to a fair and responsible end."

But the mayor and Chicago Public Schools say it's just not realistic to fund everything the union wants.

"CPS is not flush with cash," the mayor said. "The fact is there is no more money. Period."

About 75% of their students qualify for free or reduced lunch. In some neighborhoods, gangs and violence permeate the streets, forcing children to grapple with grief at a very young age.

Nine of 10 majority-black schools have no librarians, and there aren't enough bilingual teachers in a district that's "nearly half Latinx," the union said.

And many schools don't have a full-time nurse.

"There (are) just tragedies waiting to happen because we don't have enough staff in our schools," nurse Dennis Kosuth told CNN affiliate WLS.

Last year, Kosuth had to split his time among six schools.

"It was impossible for me to give the kind of care that I wanted to give to my students," he said.

And from the elementary to high school levels, CTU said, some classes have more than 40 students.

A bit of progress

Chicago Public Schools has offered to steadily raise teachers' salaries to an average of $97,757 by fiscal year 2024.

"We will also ensure every school has a full-time nurse by 2024," CPS said.

It said it would also commit another 200 social workers and special education case managers for the highest-need schools over the next three years.

A veteran teacher's aide makes less than $30,000 a year and must work other jobs

CPS' latest offer would also raise the salaries of teachers' assistants, nurses and clerks every year for the next five years.

"Social workers, nurses, counselors, and other similar positions are hard to hire," the school district said. "The candidate pool is limited, and hiring is competitive."

Last month, the union asked for "CPS to hire more than 1,000 new employees by October 1, 2019, across several hard-to-find specialties," the school district said.

"The (union's) proposal also calls for hiring approximately 3,000 more employees over the next two years at a cost of more than $800 million. Even if CPS could realistically afford such a commitment, it would be nearly impossible to meet those hiring goals."

After lengthy negotiations Saturday, the teachers' union said both sides are getting closer to an agreement -- but sticking points remain.

"One goes with the pipeline for teachers of color," which could help reverse "the precipitous decline of black teachers," she said.

"The other one that's huge is that over the life of the contract, we effectively have a charter (school) moratorium."

While many parents have joined teachers on the picket lines, some oppose the strike.

"To me, it's a whole distraction and interruption to the school year," said Liam Boyd, the father of a fourth grader at Blaine Elementary School.

"I don't support the union. I think the school district and the city has been more fair this time and (are) trying to be more fair."

The union's president, Jesse Sharkey, said he has two children in the school district.

"We understand that a strike is a disruption to the parents of the city," Sharkey said. "It's worth a short-term disruption if that puts in place over the long-term the conditions that make education better in this city."