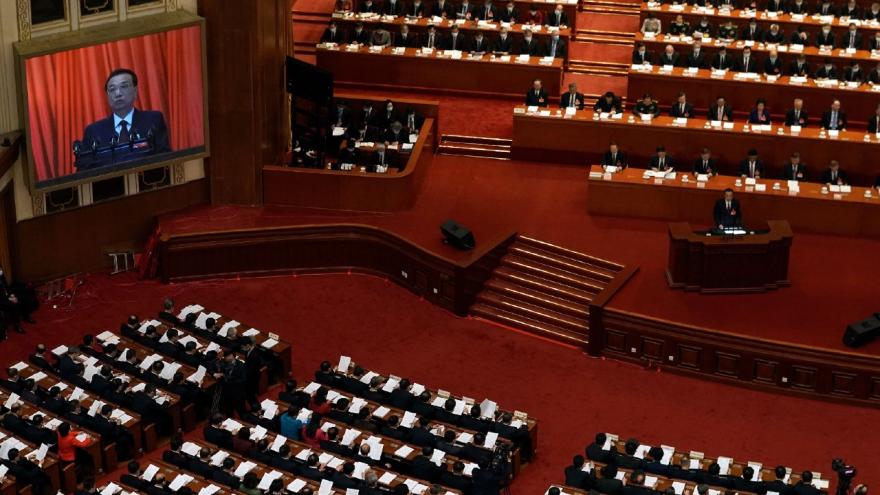 (CNN) -- China's leaders are finalizing their political and economic agenda for the rest of 2021 and beyond. How the country achieves technological independence and tackles the climate crisis will be near the top.

This year's "Two Sessions" meeting — the most important annual event on China's political calendar — is particularly noteworthy because Beijing will ratify its 14th five-year plan, a broad outline of goals through 2025 that policymakers have been working on for months. The meeting kicked off last Thursday and will run through the better part of this week.

After dodging a recession last year, Beijing said Friday it expects the to grow by more than 6% in 2021, which if achieved will keep China on pace to match US GDP as early as 2028. President Xi Jinping wants the economy to double in size by 2035.

But on the back of the bruising trade war with the United States, China has already called out self-reliance and technological independence as major goals. And as climate change accelerates, Xi pledged last September that coal-guzzling China will go carbon neutral by 2060.

Those are lofty ambitions, and until now it had been far from clear how Beijing planned to achieve them. But the world got more clues last week when Premier Li Keqiang outlined some aspects of the country's agenda, and Beijing released a draft of the five-year plan.

One key goal that Xi has already outlined is a desire for China to shed its reliance on the United States for key technology, such as parts that power smartphones, computers, telecommunications gear and next-generation gadgets.

Li stressed the importance of technological development and innovation during his speech on Friday. He said that China will increase spending on research and development by more than 7% annually. The Chinese government has previously identified semiconductors, 5G computing as critical areas, among others.

Still, China has a long way to go to end its reliance on foreign tech. In 2019, the country imported $306 billion worth of chips, or 15% of the value of its total imports. And Washington has severely hampered some of Beijing's ambitions in recent months by slapping restrictions on Chinese companies, including Semiconductor Manufacturing International Corporation (SMIC).

State-owned companies such as SMIC are central to Beijing's drive for self-sufficiency. But private firms also have a critical role to play. After all, tech giants from Alibaba to Tencent have driven much of Chinese innovation in the field in recent decades.

The government has made clear in recent months — and in its new five-year plan — that such companies will be expected to toe the Chinese Communist Party line if they want to succeed.

"As Xi pursues ambitions for China at the cutting edge of technology, Beijing recognizes that a top-down approach has limits," Eurasia Group analysts wrote in a recent research report. "But Beijing's willingness to leave more to the market will be challenged by Xi's sense of urgency and frequent preference for a strong hand for the [Party] and state."

Beijing has steadily been broadening its control over tech companies in recent months. Not only did Chinese regulators force Alibaba's financial affiliate Ant Group to call off its record-breaking IPO in November they also have ordered the company to overhaul its business. Authorities also launched an antitrust investigation into Alibaba, questioned executives at Tencent and Pinduoduo, and floated new rules.

The government has also shown a desire to strengthen its influence over the economy by creating its own digital currency and extending a trial version to major cities including Beijing and Shanghai.

The new five-year plan gave more insight into how authorities want to expand their reach. Tech companies are "encouraged" to share data related to research, networks.

As China charts its economic trajectory for the coming years it will also have to balance those ambitions with an urgent need to tackle the climate crisis.

Xi unveiled a bold plan last year for China to become carbon neutral by 2060. It's a massive target for a country that burns more coal than the rest of the world combined, and one that will require nothing short of an economic revolution.

The country spent decades staking its ascent on massive infrastructure projects and manufacturing, building an economic engine that is now heavily reliant on dirty energy. And analysts have said that pressures caused by Covid-19 and tensions with the West are pushing China to spend more on those energy sources, not less.

Still, the country has finally started outlining some details on how it wants to work toward its climate coals.

Even before the "Two Sessions" meeting kicked off, the state power grid had unveiled plans to upgrade its network, reduce coal-power generation and develop charging stations for electric vehicles.

The draft five-year plan contained more benchmarks. By the end of 2025, China aims to boost the use of non-fossil fuels to 20% of total energy consumption from the current level of 15%. That includes efforts to build more nuclear power stations and clean energy facilities.

Premier Li said Friday that China intends to cut energy consumption per unit of GDP by 3% in 2021. It plans to do so by eliminating heavy air pollution and requiring some 70% of heating in the northern part of the country to come from clean energy sources, among other methods.

"This should be a start to commit to the net-zero carbon emission target by 2060," said Iris Pang, chief economist for Greater China at ING, in a Friday report.

China outlined other ways to reach its coals, including through the construction of more clean energy facilities like hydropower plants and wind farms.

But some climate experts argue that the five-year plan still lacks significant detail about how China will ultimately move away from coal in a more meaningful way.

"In terms of the climate, initial indications from China's 14th Five Year Plan are underwhelming," said Swithin Lui, lead China analyst for the Climate Action Tracker at NewClimate Institute, in a statement Friday. "While it's positive that this plan does reiterate its commitment to carbon neutrality by 2060, and peaking emissions before 2030, there is little sign of the change needed to reach that goal."

— Ivana Kottasová and Steven Jiang contributed to this report.