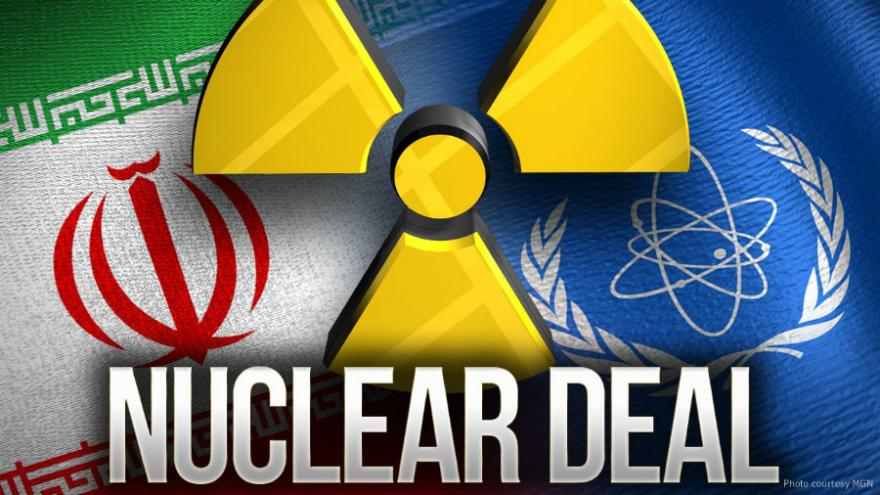 (CNN) -- In comments likely to frustrate the White House, German Chancellor Angela Merkel said Germany and China will stand by the existing nuclear accord with Iran, even as the US has withdrawn and expects its European allies to follow suit.

Merkel made the statement during a joint news conference with Chinese Premier Li Keqiang in Beijing, Reuters has reported.

Her remarks come hours after Iran's leader, Ayatollah Khamenei, issued a set of demands to European powers in which he voiced skepticism that they would remain committed to the 2015 deal. He also warned that Iran would restart its nuclear activities if they failed to act swiftly.

"The heads of European countries say different things. For our economy, we cannot rely on JCPOA and the Europeans," Khamenei said in statements that were published on his official website. He was referring to the Joint Comprehensive Plan of Action, otherwise known as the Iran nuclear accord.

Khamenei said the JCPOA could only continue if the Europeans fulfill six conditions including: Promising not to ask Iran about its ballistic missile program or its regional activities; guaranteeing that Iran's oil will continue to be sold and compensating for any losses and buying any remainining stock; and having European banks guarantee financial transactions with Iran.

"If the Europeans linger over our demands, Iran has the right to resume its nuclear activities," Khamenei continued. "When we see that the JCPOA is useless, one way forward is to restart those halted activities."

Khamenei said Iran had learned its lessons and could no longer "interact with the US." Speaking with Iranian government officials on Wednesday, Khamenei said the US had "plotted various political, economic, military and propaganda schemes against the Islamic Republic," all aimed at overthrowing the regime.

"All their plots have failed .... just like Tom from the well-known Tom and Jerry cartoon; and they will fail again in the future."

Khamenei and other Iranian officials have been on the attack since US President Donald Trump withdrew from the Iranian nuclear accord on May 9 this year. Trump had long excoriated the deal, claiming it didn't go far enough in deterring Iran's ambitions in the Middle East, or doing anything to curb its ballistic missile program.

Iran's foreign minister, Mohammad Javad Zarif, told reporters in Tehran on Wednesday that Iranian support in Middle Eastern countries was only there because those countries had requested it.

"As long as these governments want us to maintain our presence we will help, and the aids we provide is to the benefit of the entire world," Zarif said.

Iran has funded and equipped proxy forces in Lebanon, Syria and Iraq, as well as Houthi rebels in Yemen who are fighting pro-government forces. It has also provided for Shia militias and their commanders and politicians in neighboring Iraq. Rockets fired into Saudi Arabia from Yemen are reported to have been supplied to the rebels by Iran. And Israel has sustained attacks along its borders with Lebanon and Syria from Iranian-supported forces.

Khamenei and Zarif were also reacting to comments from US Secretary of State Mike Pompeo, who on Monday gave his first policy speech after assuming the role of the country's top diplomat.

He set out at least 12 conditions for Iran to meet if it wanted to avoid the painful "sting of sanctions" that would include "unprecedented financial pressure."

Among Pompeo's demands: Iran allowing a full account and verification of its nuclear program and the permanent and verifiable abandonment of it; an end to enrichment; access for the International Atomic Energy Agency into all weapons sites across Iran; the end of ballistic missile proliferation, the release of all detained US citizens; and the end of its support to militant groups including Hamas in the Gaza Strip and Hezbollah in Lebanon.

"The length of the list is simply a scope of the malign behavior of Iran," Pompeo said in his speech at conservative think tank the Heritage Foundation in Washington DC. "We didn't create the list, they did."

When it comes to Iran's demands, it insists that its oil sales continue unperturbed regardless of the impact of whatever sanctions the US might impose. Right now, the biggest consumer of Iran's oil is China. And with Li standing beside Merkel as she declared the two nations would remain committed to the deal, those sales seem less in doubt.

In his comments on Monday Pompeo said he expected not only "European friends" to support the US strategy, "but much more than that."

"I want the Australians, the Bahrainis, the Egyptians, the Indians, the Japanese, the Jordanians, the Kuwaitis, the Omanis, the Qataris, the Saudi Arabians, South Korea, the UAE and many, many others worldwide to join in this effort," he said.

But so far, the responses have been muted. The Europeans and other world leaders had urged the White House not to walk away from the deal.

Along with Merkel, the leaders of Europe and the European Union have said they intend to stick to the deal, while leaders in Russia and Turkey criticized the US decision. Votes of support are few, and have so far come from Israeli Prime Minister Benjamin Netanyahu, as well as the leaders of Saudi Arabia and the UAE.