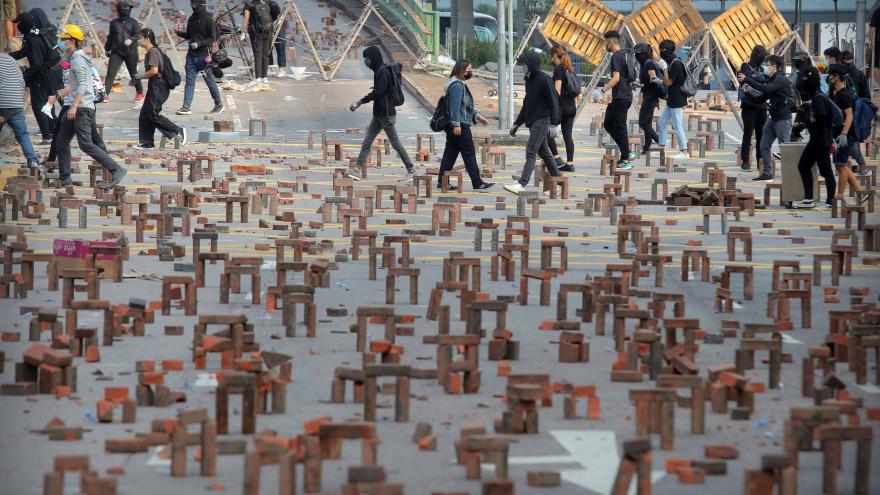 (CNN) -- China's President Xi Jinping has called for an end to the violence in Hong Kong, in comments that coincided with the second protest related death in a week in the semi-autonomous city.

Speaking on the sidelines of the BRICS summit in Brazil on Thursday, Xi said that order must be restored to Hong Kong, adding the ongoing "radical" protests had trampled the city's rule of law and social order.

The Asian financial hub has been gripped by a renewed spate of violent unrest in recent days, following the death of a 22-year-old student who fell near the scene of demonstrations last Friday. Protesters have clashed with riot police at multiple locations, paralyzing much of the city and forcing citywide school cancellations.

In his remarks Thursday, Xi pledged his support for the city's police authorities and its embattled leader Carrie Lam"in severely punishing the violent criminals in accordance with the law." The rare comments by Xi came just hours before a 70-year-old man who was struck by a brick during clashes between protesters and their opponents died of his injuries.

The unidentified elderly man died late on Thursday night at the Prince of Wales Hospital in the New Territories, a Hong Kong Hospital Authority spokesperson said.

According to police, the man was on a lunch break from his job as a cleaner on Wednesday when he voluntarily began clearing the road of bricks thrown during demonstrations. Video of the alleged incident provided by police shows protesters and government supporters hurling bricks at one another before a man falls to the ground.

The death of the man is likely to further raise tensions in the protest-wracked city. More people have been critically injured this week, than at any point in the long-running movement, with Hong Kong's Hospital Authority saying 67 people were treated in hospitals in total on Wednesday with injuries related to the protests.

Earlier in the week, a protester was shot by police and a man was set on fire following a dispute with protesters. A 15-year-old boy was struck in the head by what was believed to be a tear gas canister and is also in critical condition, according to Hong Kong's Hospital Authority.

The violence has since spread to other countries. According to the government, Hong Kong's secretary for justice, Teresa Cheng, was injured in the UK capital London on Thursday after she was surrounded by a protesters.

"The Secretary immediately made a report to the London Police and requested the Police to take the case seriously and put the culprits to justice," the government said.

The major escalation in political unrest this week has once again raised questions over what will happen next. On Thursday, China's top state-run television channel issued an online editorial telling protesters their actions are "undisguised terrorism."

"We have had enough talking, persuasion and warnings. To stop the unrest has to be implemented and advanced more resolutely now. The country will never accept the situation to be out of control, justice to be covered or Hong Kong to be sunk," the editorial from CCTV read.

It echoed an editorial in the state-run tabloid Global Times suggesting the People's Armed Police and the People's Liberation Army were ready to back up Hong Kong's government "when necessary."

"We also warn the radical protesters: You are on the edge of doom. Those who are coerced to be 'valiant' should walk away as soon as possible when you still can make the call," the editorial said.

However, it is not clear if Beijing has a red line, and what it would take for protesters to cross it before provoking a Chinese military response.