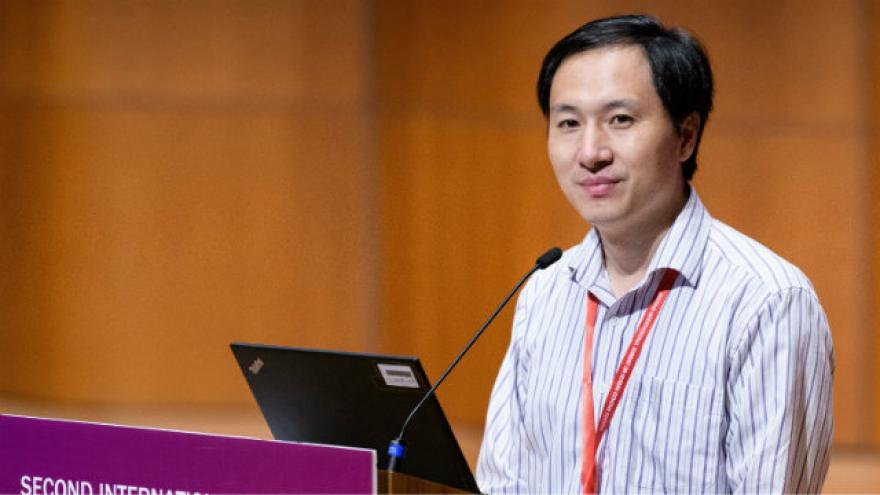 In November, Chinese scientist He Jiankui sparked international outrage when he announced that twin girls -- Lulu and Nana -- had been born with modified DNA to make them resistant to HIV. He later claimed a second woman was pregnant as a result of the research.

On Monday, Xinhua appeared to confirm the existence of the second pregnancy, but did not give any further details.

On Monday, investigators from Guangdong Province Health Commission said that "the case has been initially identified as an explicitly state-banned human embryo-editing activity for reproductive purposes conducted by He Jiankui," Xinhua reported. The commission added that the scientist has conducted the work "In pursuit of personal fame and fortune, with self-raised funds and deliberate evasion of supervision and private recruitment of related personnel."

The authorities also believe He forged both ethical review documents and blood tests to circumvent a ban on assisted reproduction for HIV-positive patients, state media reported.

Questions emerged over the authenticity of He's ethical approval documents soon after the babies were revealed when one of the hospitals named in the paperwork denied any involvement in the procedures.

"We can ensure that the research wasn't conducted in our hospital nor were the babies born here," a Shenzhen Harmonicare Women's and Children's Hospital representative told CNN in November. The hospital confirmed that two of the doctors named in He's documents work at the hospital and suggested that an internal investigation was underway.

Editing the genes of embryos intended for pregnancy is banned in many countries, including the United States. In the UK, editing of embryos may be permitted for research purposes with strict regulatory approval. It is unknown whether the procedure is safe or, if used in pregnancy, whether it can have unintended consequences for the babies later in life or for future generations.

'A series of poor decisions'

Following the initial results of the investigation reported by Xinhua, Yalda Jamshidi, reader in Genomic Medicine at St George's, University of London, said the Chinese investigators appeared to confirm that the birth of the gene-edited twins were the result of "a series of poor decisions."

"Unsurprisingly, the experiments have been met with heavy criticism, particularly as the procedures used have not been tested for safety in humans, and were not carried out for any real medical need," Jamshidi said in an emailed statement.

"The report will hopefully set an example with appropriate legal and punitive actions to reassure the public and scientific community that gene editing, like all potentially new medical interventions, will only be allowed where they address a true medical need, and with appropriate ethical and regulatory oversight," the statement added.

But Dr Helen O'Neill, program director of Reproductive Science and Women's Health at University College London had a more muted response to the latest outcome.

"The reports do not shed much in the way of new light on the story. There is no further clarification on what measures will be taken to prevent this happening in future, nor what will be done as punishment for He Jiankui's lack of regard for policy, the patients and the scientific community."

Authorities in China said He and any other people or institutions involved will be "dealt with seriously according to the law, and if suspected of crimes, they will be handed over to the public security bureau," according to Xinhua.