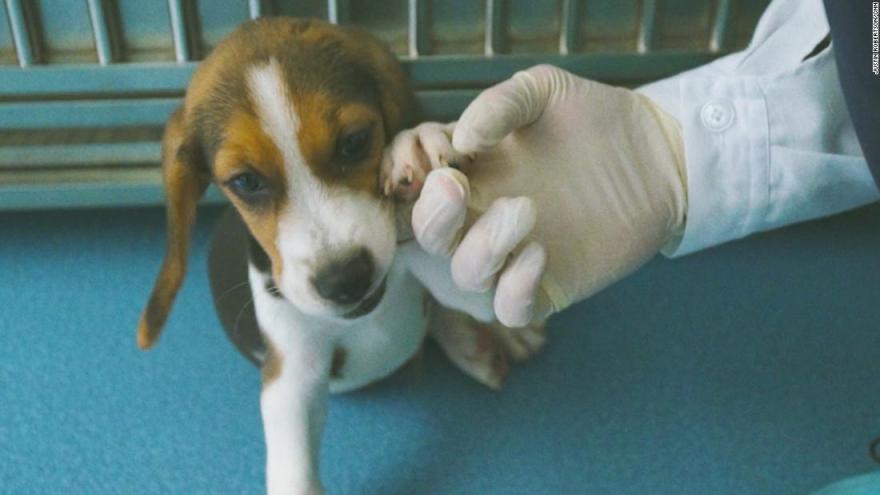 (CNN) -- With his black, brown and white fur, Longlong looks like most beagles. But the puppy has been sick with a blood-clotting disorder since birth — exactly what scientists in China had wanted.

The pup was cloned from Apple, a different dog whose genome was edited to develop the disease atherosclerosis.

With that genetic information now coded in, the disease -- a leading cause of stroke and heart sickness -- was passed along to Longlong, who scientists will use to study the condition and its possible cures.

"A cloned dog born from a gene-edited cell donor is certainly a breakthrough," says Eugene Redmond, director of Neural Transplantation and Repair at the Yale University School of Medicine, who was not involved in the research.

"Dogs share the most inheritable diseases with human beings, which makes them the best disease models to study," says Feng Chong, technical director at Sinogene.

According to Feng, Longlong's birth was the first time scientists had combined two cutting-edge bio-technologies: A gene-editing tool called CRISPR with somatic cell cloning technology - the method used to clone Dolly the sheep.

Atherosclerosis, in which fatty material builds up and thickens artery walls, can cause heart attacks and strokes, and affects more than 15.8 million Americans alone. Cardiovascular diseases are the number one cause of death globally, killing 17.7 million people in 2015, according to the WHO.

To date, researchers say the dogs haven't shown any symptoms of the disorder but they are closely monitoring their health, said Mi Jidong, General Manager of Sinogene. Drugs to treat cardiovascular diseases are already being tested on the healthy animals, he added.

While other countries are involved in similar research, China has been at the forefront of genetically customized animals, with scientists engineering monkeys to have a human autism gene, extra-strong dogs and pigs without retroviruses.

But as with other cloning and gene-changing experiments, Sinogene's success has been met with ethical concerns.

"Cloning is not only expensive, but also inherently cruel," the statement said.

Beyond concerns about the morality of the science, there's also a lack of legal protection for laboratory animals in China. The country is a major producer and user of lab animals. About 20 million lab animals, mostly mice, are used annually for testing, according to China's National Institutes for Food and Drug Control.

Deborah Cao, author of "Animals in China: Law and Society," and professor at Griffith University in Australia told CNN that lab animal welfare is one of the few areas of scientific research protected by law. Yet enforcement and transparency on the humane treatment of lab animals is spotty.

"Little scholarly investigation and reports have been done into the actual use or abuse of laboratory animals in China," Cao says.

China's state media reported last year that the government is writing tougher regulations for lab animals, but it is not clear when such rules would be effective or become legally binding.

Some people question the value of pouring money into research that is risky and controversial.

Zhao Jianping, vice manager of Sinogene, says the company's success in dog cloning is about 50%. Two surrogate dogs out of four gave birth to three cloned puppies. The other two did not get pregnant.

Apple's birth followed unsuccessful attempts with five puppies whose genes were modified but did not test positive for atherosclerosis.

PETA believes that the funding that goes to such research should be used to help homeless pets rather than create more animals.

"The vast amount of money used to clone could help save millions of cats, dogs and other companion animals who are euthanized at shelters every year because there are not enough homes for them," Chi Szuching, representative of PETA Asia, says.

But scientists at Sinogene believe their work aids the future of pharmaceutical development and biomedical research. The company is planning to produce more cloned dogs like Longlong.

"Gene-edited dogs are very useful for pharmaceutical companies," said Feng. "The supply falls short of the demand every year."

Feng added that making their gene-edited dogs more accessible could revolutionize research in this area.

The earlier method to create atherosclerosis in dogs was to force feed the animals with meals high in sugar and fat until symptoms appeared. The current technique of gene editing and cloning involves less suffering, he said.

Yale's Redmond agreed: "If anything, making better animal models more focused on the problem of interest could lead to better therapy development, [and] safer treatments, with fewer animals required."

However, Keith Guo, PETA Asia Press Officer for China, said he doubted whether the new method was less cruel than the previous one as the animals will still suffer.

Sinogene's Feng says the animals are treated with care and respect.

The company said it also planned to clone working dogs like police dogs, guide dogs, and even ordinary pets to ensure certain biological traits can be passed on.

Sarah Chan, Chancellor's Fellow in bioethics at the University of Edinburgh in the UK, thinks scale matters when it comes to commercialization -- and ethics.

She doesn't think this kind of research with a small number of test animals poses large ethical concerns just yet.

But if done on a larger scale and in the long term, people need to strike a balance between scientific advances and animal welfare, she said.