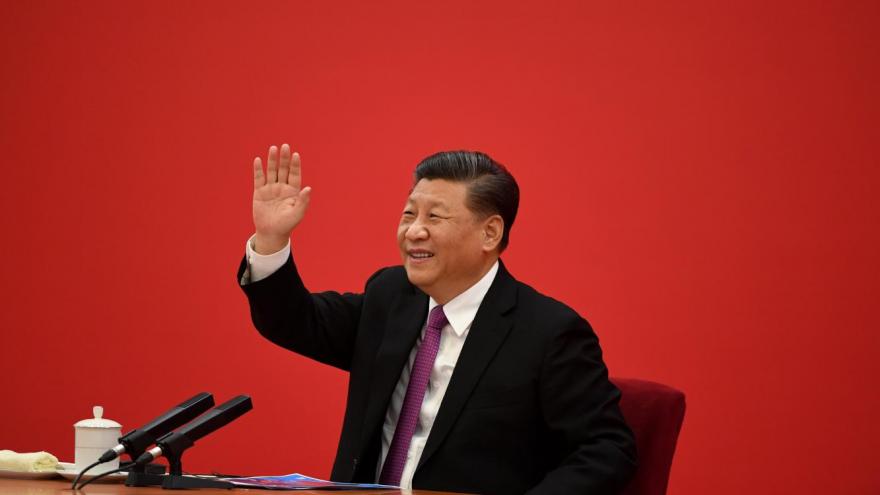 Chinese President Xi Jinping sent a congratulatory message to President-elect Joe Biden, more than two weeks after the Democratic candidate was projected the winner of the US presidential election.

(CNN) -- Chinese President Xi Jinping on Wednesday sent a congratulatory message to President-elect Joe Biden, more than two weeks after the Democratic candidate was projected the winner of the US presidential election.

"Promoting the healthy and stable development of China-US relations is not only in the fundamental interests of both peoples, but also meets the common expectation of the international community," state-run Xinhua news agency quoted Xi as saying in the message.

"I hope to see both sides uphold the spirit of non-conflict, non-confrontation, mutual respect and win-win cooperation, and focus on cooperation while managing and controlling disputes," Xi added, according to Xinhua.

Xi joins a chorus of world leaders who have congratulated Biden on winning the election, even though President Donald Trump has refused to concede. Russian President Vladimir Putin hasn't congratulated the President-elect.

On November 13, a Chinese Foreign Ministry spokesman, without naming Xi, offered Beijing's congratulations to Biden and his running mate Kamala Harris almost a week after they delivered victory speeches. But the spokesman noted at the time that the outcome of the US election would be "ascertained in accordance with US laws and procedures."

Biden and Xi have ties that go back almost a decade, when the former vice president took a six-day trip to China in 2011 to meet with then-Chinese Vice President Xi and travel to parts of the country with him -- an effort to develop a relationship with the country's heir apparent.

Less than a year later, in February 2012, Xi came to Washington, where Biden brought him to the Oval Office to meet President Barack Obama and then traveled with Xi to Los Angeles to announce an agreement to film more US movies in China.

It remains to be seen how and whether that early investment in a relationship will help Biden navigate the relationship with China under Xi's leadership. An early sign of tensions to come came during a 2013 trip Biden took to China after Xi had risen to become the country's top leader.

While Biden was there, Beijing suddenly established an air defense zone that affected the defense of islands that both China and Japan claim -- a test of the US-Japan security alliance just six months after Xi had suggested "a new type of great power relationship" to Obama during a June 2013 summit in California.

Almost nine years later, Biden's incoming foreign policy team has made clear that it sees China as one of its most pressing challenges, and Biden himself wrote in the January issue of Foreign Affairs that the US needs to "get tough with China."

While China has benefited from the global economic system, it has resisted accepting many international norms, made increasingly aggressive territorial claims in Asian waters, used predatory lending to gain leverage over other countries and tightened its authoritarian hold domestically, creating prison camps for ethnic Uyghur Muslims and moving to crush Hong Kong's autonomy and freedoms.

The President-elect has said there are areas where it is in the US interest to work with China, including on climate change and North Korea. In other areas, Biden advisers say he feels its important to work closely with allies to present a united front on issues such as technology, including Huawei and 5G, intellectual property theft and China's expansion in Asian waters.

CORRECTION: An earlier version of this story listed the wrong lead author. It is Steven Jiang.