Chinese rocket expected to crash into Earth this weekend 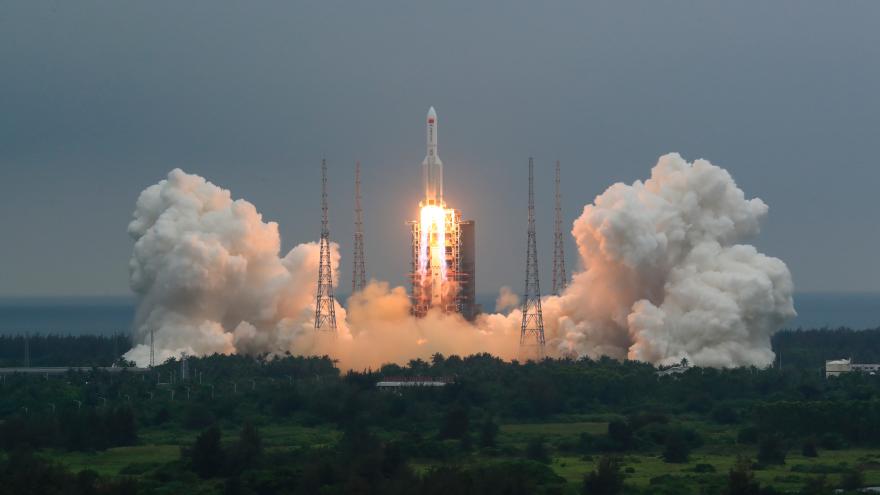 A large Chinese rocket that is out of control is set to reenter Earth\'s atmosphere this weekend. In this photo from April 29, a Long March 5B rocket lifts off from the Wenchang Spacecraft Launch Site in Wenchang in southern China\'s Hainan Province. - Ju Zhenhua/Xinhua/AP

(CNN) -- A large Chinese rocket that is out of control is set to reenter Earth's atmosphere this weekend, bringing a final wave of concern before its debris makes impact somewhere on Earth.

The Long March 5B rocket, which is around 100 feet tall and weighs 22 tons, is expected to enter Earth's atmosphere "around May 8," according to a statement from Defense Department spokesperson Mike Howard, who said the US Space Command is tracking the rocket's trajectory.

The rocket's "exact entry point into the Earth's atmosphere" can't be pinpointed until within hours of reentry, Howard said, but the 18th Space Control Squadron is providing daily updates on the rocket's location through the Space Track website.

The good news is that debris plunging toward Earth -- while unnerving -- generally poses very little threat to personal safety.

"The risk that there will be some damage or that it would hit someone is pretty small -- not negligible, it could happen -- but the risk that it will hit you is incredibly tiny. And so I would not lose one second of sleep over this on a personal threat basis," Jonathan McDowell, an astrophysicist at the Astrophysics Center at Harvard University, told CNN this week.

The European Space Agency has predicted a "risk zone" that encompasses "any portion of Earth's surface between about 41.5N and 41.5S latitude" -- which includes virtually all of the Americas south of New York, all of Africa and Australia, parts of Asia south of Japan and Europe's Spain, Portugal, Italy and Greece.

That enormous range is, in part, a result of the rocket's blistering speed -- even slight changes in circumstance can drastically change its trajectory.

"We expect it to reenter sometime between the eighth and 10th of May. And in that two-day period, it goes around the world 30 times," McDowell said.

Still, the ocean remains the safest bet for where the debris will land, he said, just because it takes up most of the Earth's surface. "If you want to bet on where on Earth something's going to land, you bet on the Pacific, because Pacific is most of the Earth. It's that simple," McDowell explained.

The rocket launched a piece of the new Chinese space station into orbit on April 29 but then was left to hurtle through space uncontrolled until Earth's gravity began pulling it back to the ground.

That approach is a break with what McDowell calls "best practice" compared with what other space agencies do.

"Norms have been established," he said. "There's no international law or rule -- nothing specific -- but the practice of countries around the world has been: 'Yeah, for the bigger rockets, let's not leave our trash in orbit in this way.' "

Despite recent efforts to better regulate and mitigate space debris, Earth's orbit is littered with hundreds of thousands of pieces of uncontrolled junk, most of which are smaller than 10 centimeters -- about 4 inches. Objects are constantly falling out of orbit, though most of them burn up in the Earth's atmosphere before they have a chance to make an impact on the surface.