Christo, who made monumental art around the world, has died at 84 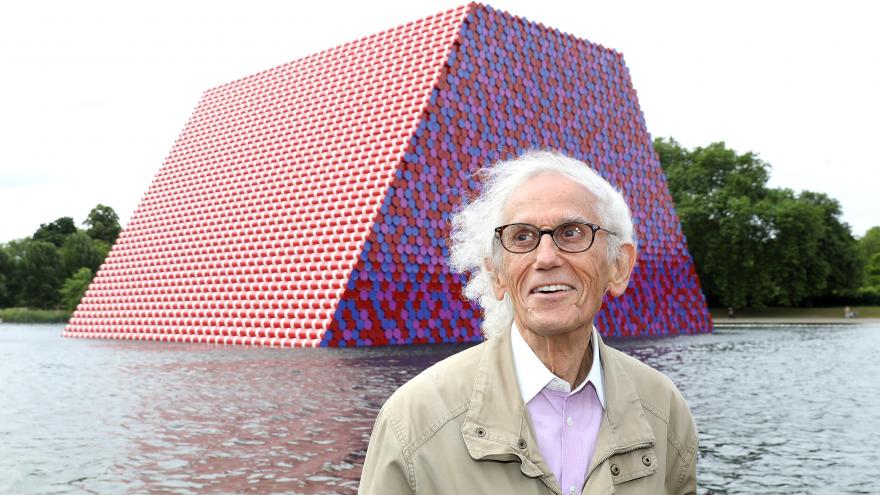 (CNN) -- Christo Vladimirov Javacheff, who was known for his monumental environmental artworks with his late wife, Jeanne-Claude Denat de Guillebon, has died. He was 84 years old.

Together, known simply as Christo and Jeanne-Claude, they wrapped iconic landmarks in fabric, such as the Pont Neuf in Paris in 1985 and the Reichstag in Berlin in 1995; and mounted thousands of orange gates in Central Park, redolent of Japan's sacred torii gates, in 2005.

Christo passed away Sunday 31 May at his home in New York, according to a statement made on the artist's official twitter account.

He is survived by his son, Cyril Christo, a photographer, filmmaker and animal rights activist. Jeanne-Claude passed away following a brain aneurysm in 2009.

After her death, Christo dedicated himself to completing their concepts. In 2016, he realized their work "The Floating Piers" on Italy's Lake Iseo, a project they imagined in 1970. For 16 days, golden pathways appeared on the lake, supported by 220,000 polyethylene cubes. Like many of their works, it was a popular success. Some 270,000 people turned up to walk on water during the first five days.

In 2018, Christo unveiled "The London Mastaba," a floating installation on the Serpentine Lake in London made of more than 7,000 oil barrels. It was the artist's first major public, outdoor work in the United Kingdom. His next work was to appear in Paris, in September 2021 -- the long-awaited wrapping of one of the world's most famous war memorials, the Arc de Triomphe. In May 2020, Christo told CNN he couldn't believe it was actually happening. "I never believed that we'd get permission -- "I was flabbergasted."

The statement announcing his death also indicated the Paris project would go ahead: "Christo and Jeanne-Claude have always made clear that their artworks in progress be continued after their deaths. L'Arc de Triomphe, Wrapped (Project for Paris) is still on track for Sept. 18--Oct. 3, 2021."

Christo and Jeanne-Claude were born on the same day on June 13, 1935 -- Christo in Bulgaria and Jeanne-Claude in Morocco. In 1957, Christo attended one semester at Academy of Fine Arts in Vienna before eventually landing in Paris, where he met Jeanne-Claude in 1958. He had already begun wrapping objects, such as furniture and oil drums, and they began working together in 1961. For decades, the couple only used Christo's name, until 1994 when Jeanne-Claude was added retroactively to many works as his collaborator.

The artists insisted that their ambitious projects were about "joy and beauty," as Jeanne-Claude once said in 2002. However, they did not create their works in a political vacuum, and for one of their earliest collaborations they stacked oil barrels to barricade a street in Paris in protest of the Berlin Wall.

Encountering Christo and Jeanne-Claude's temporarily altered land and cityscapes could be an ebullient, perception-altering experience, and they required years -- and sometimes decades -- to pull off. Outfitting the Reichstag took 24 years from concept to completion; the artists considered the preliminary work part of their art too, naming it the "software" period while the "hardware" period encompassed the time when the physical work was materialized.

In 1980, the pair began to plan "Surrounded Islands," renting 11 islands in Miami's Biscayne Bay from the city for nearly $13,000 in order to surround their perimeters in vivid pink polypropylene fabric.

For three years, they tirelessly worked with their staff -- which included attorneys, civil engineers and a marine engineer, a marine biologist and a manatee specialist -- to bring their vision to life, facing a number of barriers to obtain permits and a federal lawsuit initiated by a wildlife paramedic. "Surrounded Islands," was finally unveiled in 1983, and it has been considered crucial to Miami's rejuvenation in the 1980s as a cultural destination. The couple countered any criticism over environmental concerns for their works, insisting they restored each site to their original condition -- and in the case of "Surrounding Islands," cleaning the land of nearly 40 tons of garbage.

Christo once described himself as an "educated Bulgarian Marxist who has learned to use capitalism for his art." They were firmly independent, eschewing a reliance on the art world to financially support their work. They funded it themselves, often selling preparatory drawings to do.