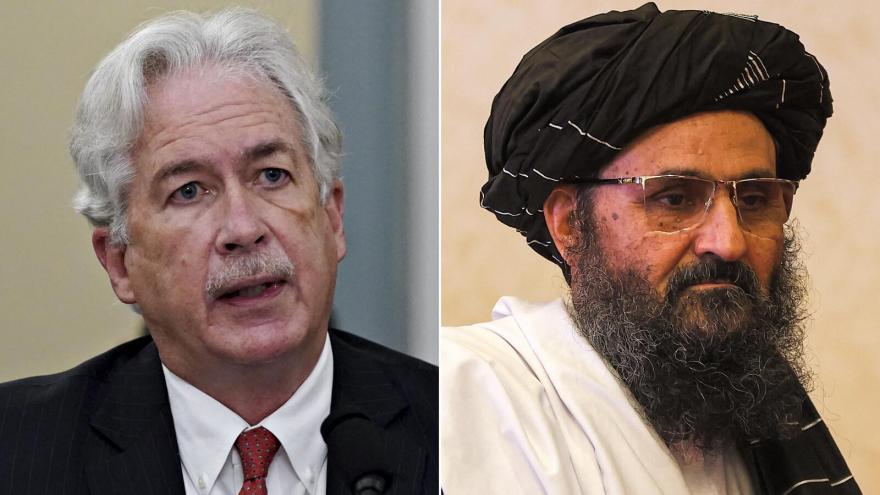 (CNN) -- CIA Director William J. Burns met face-to-face with the top Taliban leader in Kabul on Monday, according to two US officials, as the US continues airlifting American citizens and its Afghan allies out of Afghanistan by a looming August 31 deadline.

The Biden administration has been in regular contact with Taliban officials throughout the course of the evacuation process, both on the ground in Afghanistan and in Doha, Qatar.

But the covert meeting, first reported Tuesday by The Washington Post, between Burns and Taliban co-founder and deputy leader Abdul Ghani Baradar amounts to the highest-level direct exchange of views since the militant group took control of the capital, a US official briefed on the matter told CNN.

The meeting also underscores the view inside the administration that they need a clearer understanding of where the Taliban stands on several issues as the clock ticks towards the August 31 deadline to withdraw troops from the country, the official said.

A source familiar told CNN later Tuesday that the Qataris helped facilitate the meeting between Burns and Baradar. The source added that Monday's meeting demonstrates the significant role the Qataris are now playing in the future of Afghanistan.

CNN has reached out to the government of Qatar for comment.

The US official told CNN that the meeting occurred at President Joe Biden's direction, which reflects the view inside the administration that Burns is the most seasoned and one of the most trusted veteran diplomats on Biden's team.

Another official called the meeting "an exchange of views on what needs to happen to be done" by August 31.

Taliban spokesperson Zabiullah Mujahid said during a press conference in Kabul the Taliban cannot confirm that Baradar has met with the CIA director, but they are meeting with all embassies in Kabul.

The CIA declined to comment to CNN about the meeting.

The US has evacuated thousands of people from the Kabul airport who are fleeing the country as the Taliban resumes control. But the process has been chaotic and deadly.

While Biden remains confident that the US will complete its mission by August 31, he revealed Sunday that discussions are ongoing about potentially extending the deadline, but the Taliban signaled Monday that they view that date as firm.

The "US must adhere to removing troops from Afghanistan by this date. Otherwise, it will be a clear violation," a Taliban spokesperson had told CNN of the August 31 deadline, adding that in the case of a delay, "our leadership will take proper and necessary decision[s]."

The Taliban has described August 31 as a "red line" and threatened consequences if the White House moves to delay the US withdrawal.

Meanwhile, Biden is expected to face pressure from foreign allies to extend the timeline.

CNN previously reported that the US military is advising Biden that he must decide by Tuesday whether to push the deadline beyond August 31, according to a defense official directly familiar with the discussions. The President has yet to publicly commit to such a move.

The Biden administration has been reliant on the Taliban to cooperate with the evacuation efforts, and national security adviser Jake Sullivan said Monday that the US is in talks with the Taliban "on a daily basis" through political and security channels.

After the Taliban retook control of Kabul, Baradar, who heads the group's political committee, had returned to Afghanistan last week after having been out of the country for 20 years.

The Taliban's chief negotiator, Baradar and then-Secretary of State Mike Pompeo were among the witnesses for the US and Taliban's signing of an historic agreement last year, which had set in motion the withdrawal of US troops from Afghanistan. And Baradar spoke with former President Donald Trump over the phone shortly after the deal was signed.

Burns came to lead the spy agency with decades of experience as an American diplomat for the State Department, including being at the center of Middle East peace negotiations.

"If anybody knows how to negotiate, how to establish relationships, how to get good outcomes internationally, it's Bill Burns," Democratic Rep. Jim Himes, a member of the House Intelligence Committee said Tuesday on CNN "New Day."

Himes told CNN that the meeting between Burns and Baradar is "probably a good thing" because the US is "obviously in a situation that is very, very tough on the ground there."