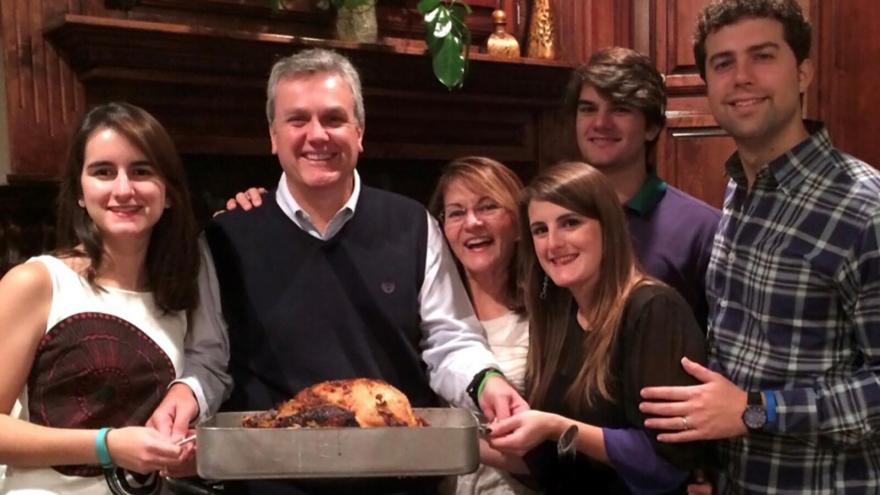 Tomeu Vadell, second from left, is one of six CITGO employees convicted on corruption charges. Vadell is shown here with his family on Thanksgiving 2015 in Louisiana.

(CNN) -- Six US oil executives who traveled to Venezuela in 2017 and were arrested on corruption charges have been found guilty, according to a person familiar with the case.

Efforts to release the men will continue despite the sentencing, according to the source.

The guilty verdicts punctuate a years-long saga that began in November 2017 when the men received a call from the head of Venezuelan oil giant PDVSA summoning them to Caracas for a last-minute budget meeting.

When they arrived, armed and masked security agents arrested them on embezzlement charges stemming from a never-executed proposal to refinance some $4 billion in CITGO bonds by offering a 50% stake in the company as collateral.

CITGO said they are "distressed to read about this outcome" and "hope for a resolution that will lead to their prompt release," in a statement issued to CNN.

The families of the "CITGO 6" — five of them American citizens and all with deep roots in Texas and Louisiana — say the men are being held in inhumane conditions, sharing overcrowded basement cells in a military counterintelligence prison and are suffering severe weight loss in a country plagued by food shortages.

But the case has largely slipped from view as Venezuela has descended further into turmoil and relations between it and the US have been torn apart by the Trump administration's strong backing for opposition leader Juan Guaidó in his battle to oust Nicolas Maduro.

Two of the men -- Cárdenas and Toledo -- were released on house arrest in July after a humanitarian visit to Caracas by former New Mexico Gov. Bill Richardson and a team of non-government negotiators.

The men began having weekly trial hearings in August after more than two years of detention.

Gabriela Zambrano Hill, the daughter of Alirio Jose and niece of Jose Luis, called the hearings "farcical" and expressed concern about the men's potential exposure to Covid-19.

Carlos Añez, Toledo's stepson, had told CNN he hoped that the hearing would reach a "favorable and correct resolution" at its end.

In a statement earlier this month, Secretary of State Mike Pompeo called for their "unconditional release" and return to the United States.

"These six Americans and their families have suffered long enough; it is time for Maduro to put politics aside and let these families be reunited," he said.

"No one should doubt the President's commitment to bringing home all US citizens held hostage or wrongfully detained overseas."

"Special Presidential Envoy for Hostage Affairs Roger Carstens, Special Representative for Venezuela Elliott Abrams, and I will continue to pursue our mission to secure the release of the CITGO-6, and we will do our utmost to achieve that goal," Pompeo said.