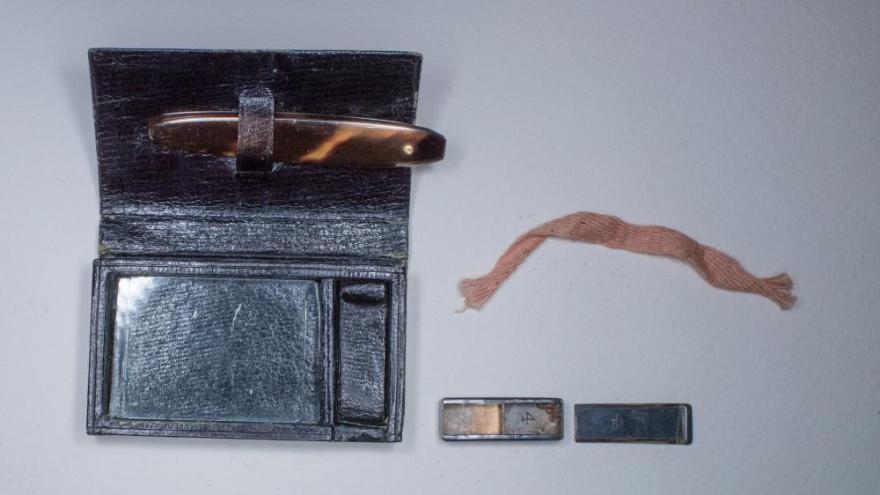 Researchers analyzed the genomes of virus fragments found on smallpox vaccination kits used during the Civil War. The kits are housed at the Mütter Museum of the College of Physicians of Philadelphia.

(CNN) -- While the race for a Covid-19 vaccine continues, scientists are learning more about the early vaccines used to fight smallpox, the only human infectious disease to be successfully eradicated.

A new study published in Genome Biology on Sunday, carried out by scientists and historians from McMaster University, the Mütter Museum and the University of Sydney, identified five vaccine strains used by Civil War-era physicians to protect people from smallpox.

Notably, the viral genome was sequenced using traces found in vaccination kits of the period, and put together by the scientists "like a jigsaw puzzle," as described by lead author Ana Duggan.

A disfiguring disease caused by the variola virus, smallpox produced blisters all over the body and killed an estimated 30% of those who contracted it, according to the Centers for Disease Control and Prevention.

Smallpox vaccine trials date back to 1796, when British physician Edward Jenner observed that milkmaids exposed to a milder relative of smallpox, dubbed "cowpox," were protected against the more severe disease.

Between Jenner's early trials and the diffusion of modern and standardized vaccination practices that led the World Health Organization to declare smallpox eradicated in 1980, physicians practiced human-to-human vaccination. That involved harvesting infectious materials from one individual and applying them to a wound on a healthy person to cause an immune reaction.

Traces of these types of materials were found in the vaccination kits examined in the study.

"The molecules that we collected from these objects were very degraded, they were not intact virions or genomes, but rather small, short pieces of DNA that had been broken down over time," Duggan explained.

The CDC ran tests to ensure there was no risk of exposure to the live virus, but the authors' biggest concern was that of protecting the kits from contamination with modern DNA.

"All laboratory work was completed inside an ancient DNA cleanroom where we wear full Tyvek suits, face masks and gloves to protect the samples," Duggan told CNN.

To retrieve relevant traces from the kits, Duggan and her team either soaked or rinsed the objects in a buffer solution to release molecules from the surfaces.

"When those molecules were released into solution, we were then able to purify the DNA fragments and sequence them so that we could start piecing together the genomes to identify the viruses that were used for vaccination," Duggan explained.

The kits spent decades in the wrong drawer

The vaccination kits were serendipitously found in a drawer in the phlebotomy section of the Mütter Museum of the College of Physicians in Philadelphia.

"The exterior of the kits looks exactly like a bloodletting kit so it's understandable that they could have ended up there decades ago. I am glad we found them and that it set us on the path of discovery and scientific innovation," Anna Dhody, the director of the Mütter Research Institute and a co-author of the study, told CNN.

Opening the kits revealed the presence not just of lancets which would have been used for bloodletting, but also tin boxes and glass slides used to collect samples such as scabs and the lymph from blisters of people who had been deliberately infected.

The scientists retrieved traces of DNA from the scabs found in the kits, and other relevant molecules from the inorganic elements like the tools and the tins, through a process of non-destructive sampling, which according to Dhody could pave the way for museums around the world to investigate their own collections in new ways.

"It's up to us as a society to acknowledge the worth of these collections in terms of their lifesaving medical potential," she added, pointing out how the economic impact of the coronavirus pandemic is putting the survival of many medical museums at risk.

"For every medical museum that shuts down, it's very possible that that information could be gone forever. That's terrifying, because we haven't even begun to scrape the surface of what they could tell us," Dhody said.

RELATED: A museum dedicated to a vaccination pioneer may be permanently closed due to coronavirus

'Many possible solutions to eradicating a virus'

The study also reveals how the strains of virus used by Civil War-era physicians were only distantly related to the ones used in commercial vaccines in the 1970s and 1980s when smallpox was effectively eradicated.

"Our Civil War-era vaccines and the vaccines of the 20th century were all vaccinia virus, however (ours) are not identical to any of those later commercial vaccines," Duggan told CNN.

"Based not only on the utility of multiple different vaccinia strains but also the ability to use cowpox virus as a vaccine source (really probably any Orthopoxvirus other than variola) to successfully infer immunity against variola virus we did discuss that there are many possible solutions to eradicating a virus," Duggan added.

"Medicine and vaccine development are very different today than they were in the 19th century -- but it's evidence that exploring multiple vaccine sources and strategies all have potential."

Hendrik Poinar, director of the McMaster Ancient DNA Centre and a co-author of the study, articulated why studying a variety of vaccine strains is useful.

"This work points to the importance of looking at the diversity of these vaccine strains found out in the wild. We don't know how many could provide cross protection from a wide range of viruses, such as flus or coronaviruses," Poinar is quoted as saying in a release.

The power of vaccination

As the world waits with bated breath for a development in the field of coronavirus vaccines, Duggan said it is important to celebrate the accomplishments and successes of past vaccination efforts.

"I think the greatest parallel between smallpox vaccination and Covid-19 is the global combined effort for the greater public good in eradicating this virus," Duggan told CNN.

The eradication of smallpox, according to Duggan, "started with physicians who recognized that they had a procedure that worked -- they didn't necessarily understand why it worked, but they knew that it saved lives."

Even before crucial discoveries about viruses and even the formulation of germ theory, physicians fighting smallpox worked collaboratively and shared information about best practices on a global scale.

"As we search for a SARS-CoV-2 vaccine, the work of Edward Jenner and subsequent physicians around the world to eradicate smallpox should serve as an inspiration to the value and potential of vaccine research and a reminder that effective vaccines can be quite evolutionarily distant from the aetiological agent they are designed to protect against," Duggan told CNN.