Claims that dead people voted went viral. These are the facts 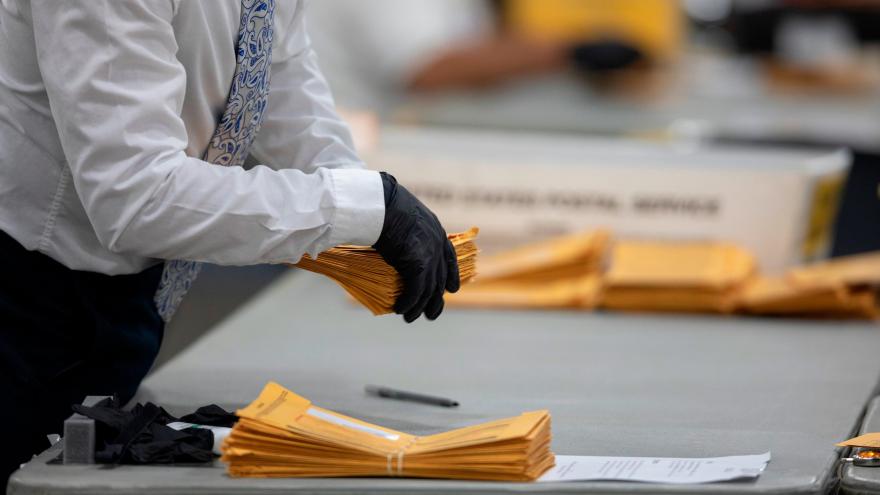 Elaine Cromie/Getty Images-A worker with the Detroit Department of Elections helps sort through absentee ballots at the Central Counting Board in the TCF Center on Nov. 4 in Detroit, MI. There were claims that Democrats were using dead people to steal Michigan\'s Electoral College votes from Trump.

(CNN) -- To hear some people tell it -- including a handful of prominent Republicans, such as members of President Trump's family and supporters like former House Speaker Newt Gingrich and former acting Director of National Intelligence Richard Grenell -- you might think that Democrats were using dead people to steal Michigan's Electoral College votes from Trump.

But, like much of the misinformation circulated online this week by some Trump supporters, the claim falls apart under scrutiny. A CNN analysis of the claim and the purported backing for it did not find a single instance of that happening.

One of the supposed pieces of evidence was a list that circulated on Twitter Thursday evening allegedly containing names, birth dates, and zip codes for registered voters in Michigan. The origin of the list and the identity of the person who first made it public are not known.

Of the 50, 37 were indeed dead and had not voted, according to the voter information database. Five people out of the 50 had voted -- and they are all still alive, according to public records accessed by CNN. The remaining eight are also alive but didn't vote.

The sample CNN reviewed is not representative, but the trend was clear -- not a single one of the names examined was of a dead person voting.

The version of the list CNN found has since been removed from the site hosting it.

A typical clip showed a person entering a name, birth date and zip code into Michigan's state-run voter lookup website. The videos would show the search results for a voter who, despite being over 110 years old, had supposedly requested and successfully returned a ballot.

Right-wing personality Austen Fletcher, who goes by the name "Fleccas" online, created some of the videos that went viral.

Fletcher's first video, posted shortly after midnight Thursday morning, shows him search for a voter named William Bradley who was born in March 1902.

"Turns out 118-year-old 'William Bradley' voted via absentee ballot in Wayne County, Michigan," Fletcher tweeted Thursday. "How long has this been going on?" he added.

Lawrence Garcia, the principal attorney for the city of Detroit, confirmed to CNN that "a man with a nearly identical name [to the deceased Bradley] requested a ballot and voted properly in both the primary and general elections."

"When his ballot was initially logged, however, it was incorrectly attributed to the William Bradley born 118 years ago through a clerical error," Garcia added.

The younger Bradley told PolitFact that he reached out to the city after Fletcher's video was posted but was told not to worry since officials check for a matching signature and date of birth.

Some prominent figures on the right, including Donald Trump Jr, actor James Woods, and activist Candace Owens shared Fletcher's videos, which have collectively garnered millions of views across Twitter.

Others, like Juan Andres Caro, a White House policy adviser, made their own videos replicating Fletcher's search.

Grenell retweeted Caro's video, which has more than a million views on Twitter.

CNN reached out to Fletcher and Caro for comment. Fletcher did not respond and Caro did not comment.

Tracy Wimmer, the director of media relations for Michigan's Secretary of State, told CNN that, on rare occasions, errors like this can occur with "voters with similar names, where the ballot is accidentally recorded as voted by John Smith Sr when it was actually voted by John Smith Jr."

She added that ballots for deceased voters are rejected and that "local clerks can correct the issue when it is brought to their attention."

Later on November 5, the Michigan Secretary of State's office replied directly to Fletcher's tweet, calling it "misinformation." By then the post had been retweeted tens of thousands of times.

Clerical errors, database quirks, and genuinely long-living individuals can sometimes explain why it looks like people are casting ballots from beyond the grave.

Occasionally living voters submit ballots with incorrect birth years that make it appear as if they're actually deceased, according to Wimmer. "In such scenarios, no one ineligible has actually voted," she said.

Other videos Fletcher produced feature voters who returned ballots and are listed in Michigan's voter information website as having been born in January 1900 or 1901.

Of course, that's not what happened. There's a much simpler and less sinister explanation.

Detroit's Director of Elections, George Azzouz explained to CNN that "the date of January 1, 1900 is often used in the electronic poll book as a temporary placeholder for absentee ballots arriving just before Election Day."

"The placeholder information has to be inserted in order for the electronic poll book to accept the entry," Azzouz added.

A 2017 report about duplicate voting from the Government Accountability Institute echoed this explanation as well.

"The vast majority of votes cast by individuals appearing to be over 115 years old had these three erroneous birthdates."

A search of public records for a different voter Fletcher featured in his videos supports this. Donna Brydges, despite being 75 years old, has a voter registration entry with a 1901 year of birth.

Catherine Lewis, the clerk for the township where Brydges lives, explained to CNN that "it is not uncommon for voters in Michigan to have 01/01/01 mistakenly listed as their date of birth in the qualified voter database."

"The voter in question properly applied for an absentee ballot, provided her state-issued driver's license with her application, and returned her absentee ballot in the properly signed and sealed envelope as required by state law," Lewis said in a statement.

"The board of election inspectors, consisting of Republican and Democratic members, had no question that the voter was who she purported to be or that her signatures matched," she added.

The fact that these birthdates showed up repeatedly by itself should have been a clue. After all, if someone wanted to steal an election using votes from dead people without getting caught, it would be silly to pick people who all happened to have been born in the same month and year, not to mention people whose incredibly advanced age would immediately raise suspicion.

Why the dead don't vote

The Michigan Secretary of State's office says casting a vote in the name of a dead person is almost impossible.

"In the unlikely event that someone who was alive and had their identity verified when they requested a ballot died before receiving it, and someone else attempted to vote as them, the signature mismatch/deceased flag in the [Qualified Voter File] would once again flag it for rejection," Wimmer explained.

In fact, CNN previously reported on a 20-year-old cancer patient in Wisconsin who voted early but sadly died before election day. Her vote was thrown out under Wisconsin law.

This assessment is backed up by research from independent organizations like the Brennan Center for Justice, a nonpartisan but liberal-leaning law and policy institute

"The consensus from credible research and investigation is that the rate of illegal voting is extremely rare, and the incidence of certain types of fraud -- such as impersonating another voter -- is virtually nonexistent," the institute notes in the resources section of their website.