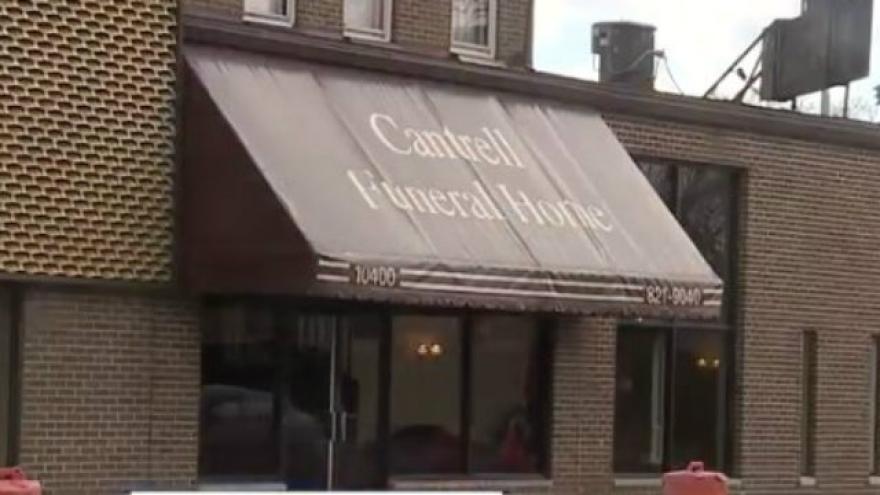 Several cremated remains were found by cleaning crews at a former Detroit funeral home where the mumified remains of 10 fetuses and 1 full-term infant were found last week in a ceiling. Photo courtesy WXYZ

Crews clearing the building for its new owner came across containers holding cremains in a trash-strewn basement over three days this week, said Julia Dale, director of the state Bureau of Corporations, Securities & Commercial Licensing.

The building on Detroit's east side was owned by the Cantrell Funeral Home until earlier this year. Last Friday, an anonymous letter led state licensing inspectors to the remains of the fetuses in a cardboard-like box and a full-term infant in a coffin hidden beneath insulation between the building's first and second floors.

Police cadaver dogs and inspectors searched the building last Friday — including the basement — for additional bodies, but found none, said Dale, who described the basement as being piled with trash and other items.

Dale said it's possible more cremains could be found with the ongoing clearing and demolition of the building. "There could be more ... certainly, given what we've seen," she said.

Detroit police Chief James Craig has said his department is looking into criminal charges against operators of the funeral home. No arrests have been made.

The Associated Press has been unable to reach the funeral home's owner, Raymond Cantrell II, for comment.

Dale said police, the county prosecutor and the Michigan attorney general's office are helping with the state's investigation.

A medical examiner is trying to determine the identities of the decomposed fetuses and the infant found in the attic. Attempts also will be made to locate their families.

Cantrell Funeral Home was shut down in April after decomposing embalmed bodies and other violations were discovered. The business also had its mortuary license suspended.

Violations included two improperly stored bodies covered in what appeared to be mold and a third body with unknown fluids covering the facial area. Inspections also turned up an unsanitary embalming room.

The establishment also was operating with an expired prepaid funeral and cemetery sales registration. The state says money for prepaid funeral goods or services had not been deposited with an authorized escrow agent within 30 days of receipt.

On Aug. 28, an anonymous caller reported that more corpses were inside the shuttered business. The next day, inspectors discovered a stillborn corpse and a set of cremated remains on a table that was not there during the inspection in April, according to the state.

A death certificate found in the building allowed Dale's office to contact the mother of the stillborn child.

Those discoveries were followed by last Friday's find in the ceiling.

Cleaning crews found the other cremains over three days this week — Monday, Tuesday and Wednesday.