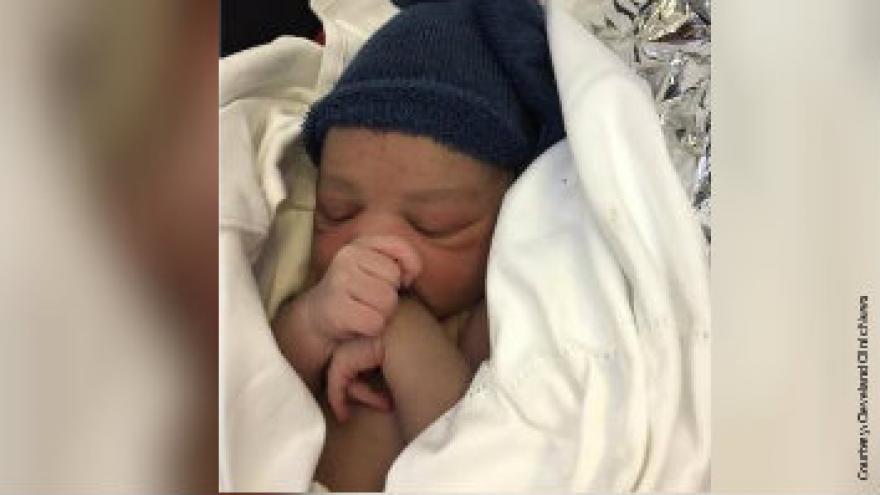 Cleveland, Ohio (WEWS) -- It was supposed to be a relaxing flight home from his best friend's wedding in India. Instead, a Cleveland Clinic doctor had to pull his medical knowledge at 35,000 feet and turn the airplane cabin into a delivery room.

“My whole plan was just to fall asleep and then they called for a doctor on the plane and that's when everything unfolded,” explained Dr. Sij Hemal, a 2nd year resident at Cleveland Clinic’s Department of Urology.

He called it destiny.

He just so happened to be sitting next to a French pediatrician on his connection from Paris to New York.

“She heard the announcement in French and then she nudged me,” he recalled.

Dr. Hemal and his coincidental seat mate, Dr. Susan Shepherd, wasted no time responding to the mid-air medical emergency. They quickly discovered the 41-year-old passenger in distress was pregnant and in labor.

“You just have a little bit of panic, but then you're like okay, I've got this under control,” Dr. Hemal said.

The closest medical facility was more than two hours away, and the baby had no intentions of waiting that long.

“So as her contractions started worsening, her water broke on the flight and that's when we could see the baby's head,” said Dr. Hemal. “That was the moment when I thought we had to just do this on the plane.”

Due to space constraints, they moved to the first class cabin.

"Got me a chance to fly first class, which I never have," Dr. Hemal joked.

They had no medical team or fancy equipment.

“We just had this blood pressure monitor and the pulse aux and that's it,” he said.

But Doctors Hemal and Shephard, aided by the Air France crew, formed their own in-flight team.

“Someone was holding the mom's hand,” Dr. Hemal recalled. “Someone was distracting her other daughter and someone was asking her to push.”

Together, they delivered a healthy baby boy.

“You have all these different races and nationalities that are coming together at 35,000 feet and helping each other out and delivering this baby,” he said. “I think all of this was possible because of God's grace and I'm very thankful to God.”

Doctor Hemal says he has been in touch with the mom and baby, named Jake, as well as Dr. Shepherd. He says everyone is doing great.