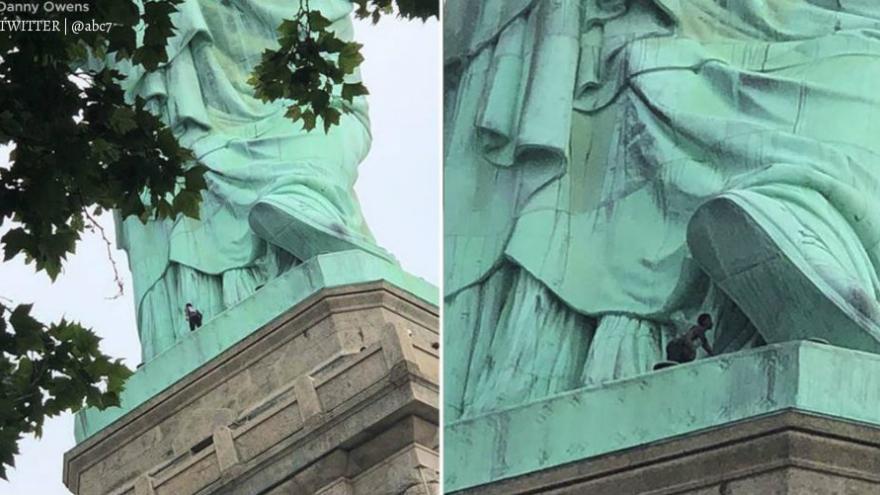 NEW YORK (AP) — A federal official says a woman who climbed the Statue of Liberty's base and spurred the statue's evacuation on July Fourth told police she was protesting the separation of immigrant children from parents who cross the U.S.-Mexico border illegally.

The official identifies the woman as Therese Okoumou. The official wasn't authorized to discuss it and spoke on the condition of anonymity.

A message left at a possible phone number for the woman hasn't been returned.

About 100 feet (30 meters) aboveground, the climber engaged in a four-hour standoff with police before two officers climbed up to the base and went over to her. With the dramatic scene unfolding on live television, she and the officers edged carefully around the rim of the statue's robes toward a ladder, and she climbed down about 25 feet (8 meters) to the monument's observation point and was taken into custody.

The woman had participated earlier in displaying a banner calling for abolishing the federal government's chief immigration enforcement agency, said Jay W. Walker, an organizer with Rise and Resist, which arranged the demonstration.

The group initially tweeted that the climber had "no connection" to the demonstration. Walker later said she was involved but others had no idea she would make the climb, which wasn't part of the planned protest. He said he didn't know her name.

"We don't know whether she had this planned before she ever got to Liberty Island or whether it was a spur-of-the-moment decision," Walker said.

Regardless, he said he felt the publicity would help the group's cause.

At least six people were arrested in the banner demonstration.

A spokesman for the National Park Service, which runs the monument, saw it differently.

"I feel really sorry for those visitors today" who had to leave or couldn't come, spokesman Jerry Willis said. "People have the right to speak out. I don't think they have the right to co-opt the Statue of Liberty to do it."

The climber ascended from the observation point, Willis said. Visitors were forced to leave Liberty Island hours before its normal 6:15 p.m. closing time, he said.

Earlier and farther below, at least six people were taken into custody after unfurling a banner that read "Abolish I.C.E.," referring to U.S. Immigration and Customs Enforcement, whose officers arrest and deport immigrants who are in the U.S. illegally, among other duties.

Under Trump's zero-tolerance policy, the government has begun requiring border agents to arrest and prosecute anyone caught entering the country illegally. That resulted in more than 2,000 children being separated from their parents within six weeks this spring.

Under public pressure, Trump later halted his policy of taking children from their detained parents. A federal judge in California ordered the Trump administration late last month to reunite the more than 2,000 children with their parents in 30 days.

"Abolish ICE" has become a rallying cry at protests around the country and for some Democratic officials seeking to boost their progressive credentials. But Trump said on Twitter last week that abolishing ICE will "never happen!"

The Statue of Liberty has long been a welcoming symbol for immigrants and refugees coming to the U.S. It also has been a setting for protests and other activities that forced evacuations.

Last February, someone hung a banner reading "Refugees Welcome" from the observation deck. The sign was taken down about an hour after being discovered.

A year earlier, a West Virginia man with psychological problems was sentenced to time served after calling in a bomb threat. The call forced the evacuation of Liberty Island, sending 3,200 people on boats back to lower Manhattan and New Jersey.

In 2000, 12 people protesting the Navy's use of the Puerto Rican Island of Vieques for bombing exercises were arrested after a man climbed out on the spires of the statue's crown and attached flags and banners to it.

Puerto Rican nationalists occupied the statue for nine hours and draped its forehead with a Puerto Rican flag in 1977, demanding independence for the island. Police rounded up the protesters, arresting 30.

The statue also was the scene of other takeovers in the 1970s by groups demanding such things as federal aid for Vietnam War veterans.

The statue, a gift from France, was dedicated in 1886.