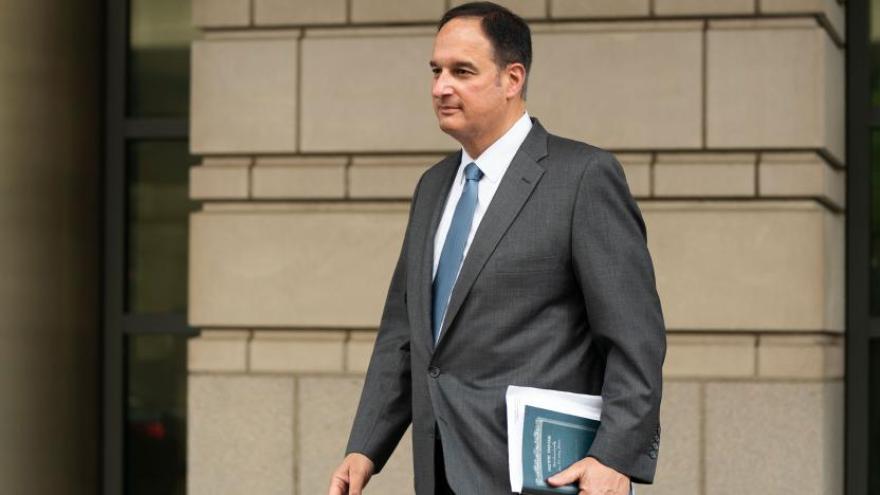 The verdict is a major defeat for Durham and his Justice Department prosecutors, who have spent three years looking for wrongdoing in the Trump-Russia probe. He claimed Sussmann lied during a 2016 meeting in which he passed a tip to the FBI about Donald Trump and Russia.

The Washington, DC, federal jury deliberated for six hours over two days before reaching its verdict.

The Sussmann case revolved around his September 2016 meeting with James Baker, a friend who was the FBI's general counsel. Sussmann passed along a tip that led to a four-month FBI inquiry into a possible internet backchannel between the Trump Organization and Kremlin-linked Alfa Bank. Both companies denied the claim, and the FBI didn't find any improper cyber links.

Prosecutors argued that Sussmann intentionally lied to Baker by saying he came only as a concerned citizen, and not on behalf of any clients, saying Sussmann hid his ties to Democrats to "manipulate the FBI" and gin up an "October surprise" to help Clinton win.

In Sussmann's telling, at the peak of Russia's attack on the 2016 election, he went to the FBI with a good-faith tip, which originated from reputable cyber experts that he represented. He separately worked on Clinton's behalf to peddle that unverified tip to the press, generating some coverage. He didn't try to dupe Baker or hide his political ties, which were well-known at the FBI.

Durham is a Trump-era holdover who was appointed by then-Attorney General Bill Barr in 2019 to review the Russia probe. Barr and Durham have publicly questioned the legitimacy of the Russia probe, but Durham hasn't yet backed up those assertions with criminal convictions.

One juror told CNN that the jury didn't initially agree on a verdict when they got the case on Friday afternoon. But over the course of deliberations, the juror said, all 12 jurors agreed that Durham's team did not meet the five legal requirements needed to find Sussmann guilty.

Sussmann's lawyers repeatedly harped on the "materiality" element, which required prosecutors to prove that Sussmann's alleged lie was relevant enough to potentially impact the FBI's work.

Four additional jurors declined to comment about the verdict.

There was an audible sigh of relief from Sussmann's family after the jury foreperson announced the not-guilty verdict. After exiting the courtroom, Sussmann's wife, Dr. Apple Sussmann, said, "holy cow, that was nerve racking." Durham lingered in the courtroom for a few minutes after it was mostly emptied out.

"This is a case of extraordinary prosecutorial overreach," defense attorneys Sean Berkowitz and Michael Bosworth said in a statement. "And we believe that today's verdict sends an unmistakable message to anyone who cares to listen: politics is no substitute for evidence, and politics has no place in our system of justice."

Sussmann spoke to the press outside the courthouse and thanked the jury, and said he was eager to move on from this ordeal and return to his work as a cybersecurity lawyer.

"I told the truth to the FBI, and the jury clearly recognized that with their unanimous verdict today," Sussmann said. "...Despite being falsely accused, I am relieved that justice ultimately prevailed in my case."

Durham said in a statement that he was "disappointed" with the verdict.

"While we are disappointed in the outcome, we respect the jury's decision and thank them for their service," Durham said in a statement. "I also want to recognize and thank the investigators and the prosecution team for their dedicated efforts in seeking truth and justice in this case."

So far, Durham's work has only led to one conviction: the guilty plea of a junior FBI lawyer who was involved in a wiretapping warrant for a former Trump 2016 campaign adviser. Durham also charged a Russian expat tied to the infamous Steele dossier, whose trial is slated for October.

The Sussmann case was the first major courtroom test for Durham, and the acquittal may bolster Durham's critics, who believe he's running a politicized probe into flimsy theories.

A few times during the trial, the judge chided prosecutors for asking politically tinged question of witnesses. And Sussmann's lawyers complained on several occasions that prosecutors were going beyond the pre-trial "guardrails" that the judge set up to keep politics out of proceedings.

Durham's team used the trial to spotlight what it characterized as the Clinton campaign's dirty tactics, and to pull back the curtain on Democrats' well-funded opposition research efforts against Trump in 2016.

Seizing on these revelations, Trump has treated Durham's probe as a political weapon, stoking excitement in the right-wing ecosystem that Durham will deliver Watergate-caliber indictments against Clinton loyalists and the "deep state" government agents who supposedly conspired against him. He has even suggested that Sussmann's and other Democrats' conduct should be "punishable by death."

Durham's efforts to "investigate the investigators" are ongoing, and have outlasted the Russia probe itself, which was taken over by special counsel Robert Mueller and convicted six Trump associates, including his lawyer, his 2016 campaign chair, and a senior White House official.