CNN Exclusive: Biden says he will ask Americans to wear masks for the first 100 days he's in office 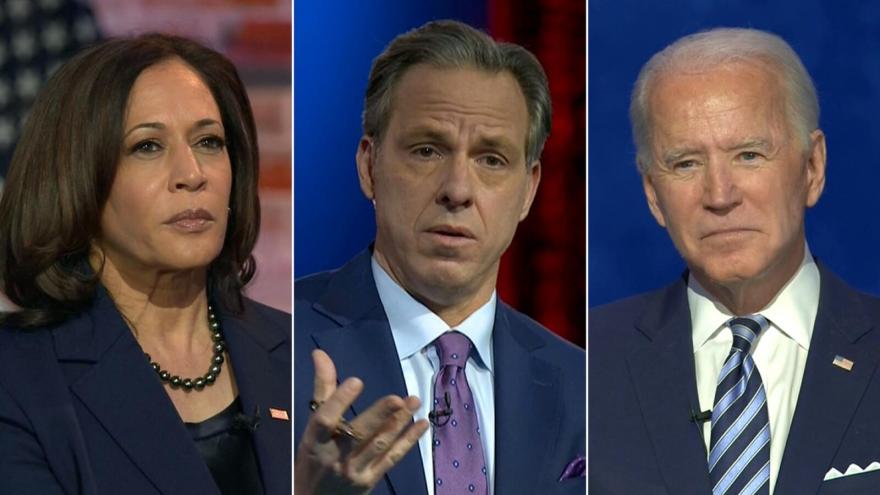 In an exclusive interview with CNN, President-elect Joe Biden says he will ask Americans to wear masks for the first 100 days he is in office.

(CNN) -- President-elect Joe Biden told CNN's Jake Tapper on Thursday that he will ask Americans to wear masks for his first 100 days after he takes office, in a sign of how Biden's approach to the virus will be dramatically different to President Donald Trump's response.

"Just 100 days to mask, not forever. 100 days. And I think we'll see a significant reduction," Biden told Tapper during his first joint interview with Vice President-elect Kamala Harris since winning the election. The full interview will air at 9 p.m. ET.

Biden said that where he has authority, like in federal buildings or in interstate transportation on airplanes and buses, he will issue a standing order that masks must be worn. The US Centers for Disease Control and Prevention says that wearing a mask can help protect the both the person wearing the mask and those around them from transmitting the virus.

Biden also said he has asked Dr. Anthony Fauci to be a chief medical adviser and part of his Covid-19 response team when his administration begins next year.

Biden said the conversation happened on Thursday afternoon. CNN reported earlier in the day that Fauci, the director of the National Institute of Allergy and Infectious Diseases and a member of President Donald Trump's coronavirus task force, had a planned meeting with Biden's transition team.

"I asked him to stay on the exact same role he's had for the past several presidents, and I asked him to be a chief medical adviser for me as well, and be part of the Covid team," Biden told Tapper.

Biden added that Ron Klain, his incoming chief of staff, knew Fauci well and had been talking to him "all the time."

Biden and Trump have long taken diametrically different approaches to the virus, an issue that came to define the presidential election. Trump has fought many of the coronavirus recommendations laid out by his own administration, including mask wearing, while Biden strenuously followed coronavirus guidelines during the campaign.

Trump's fight against coronavirus recommendations often put him at odds with Fauci, one of the most outspoken members of Trump's task force. Those clashes have made Fauci the focus of public attention, often seen as a hero on the left for his commitment to science in the face of Trump's comments, and a villain on the right, especially among Trump loyalists.

Biden described his coronavirus plans as a balance between ensuring that Americans believe the vaccine is safe and instituting a number of plans that will curb the spread of the virus without shutting down the economy.

Biden also said during the interview that he will be "happy to" get a coronavirus vaccine once Fauci says it is safe and that he will get the vaccine publicly to demonstrate his confidence in it.

"That's the moment in which I will stand before the public" and get the vaccine, Biden said. "People have lost faith in the ability of the vaccine to work. Already the numbers are really staggeringly low, and it matters what the President and Vice President do."

Biden's comments come a day after three of his presidential predecessors -- Bill Clinton, George W. Bush and Barack Obama -- said they would publicly get the coronavirus vaccine as a way to demonstrate its safety and efficacy.

"I think that my three predecessors have set the model as to what should be done, saying, once it's declared to be safe... then obviously we take it and it's important to communicate to the American people," Biden said.

Biden also said he was concerned about reports that Trump is considering a host of preemptive pardons for his adult children and lawyer Rudy Giuliani, as well as the possibility of one for himself.

"It concerns me in terms of what kind of precedent it sets and how the rest of the world looks (at) us as a nation of laws and justice," Biden said, adding that his Justice Department will "operate independently on those issues" and how to respond to any Trump pardons.

Biden concluded that his administration would not approach pardons in the same way as Trump, adding, "It's going to be a totally different way in which we approach the justice system."

Biden has yet to select an attorney general, but is considering a range of names, including former deputy attorney general Sally Yates; Doug Jones, the soon to be former senator from Alabama who was defeated in November; and Jeh Johnson, the Homeland Security secretary under Obama; among others.

Harris echoed the sentiment of Biden's remarks on the Department of Justice.

Biden interjected: "And I guarantee you, that's how it will be run."